The title of this article is ambiguous. Further meanings are listed under platinum (disambiguation) .

Platinum ( Germany : [ ˈplaːtiːn ], Austria : [ plaˈtiːn ]) is a chemical element with the element symbol Pt and the atomic number 78. It has a high density and is a precious, malleable, ductile, gray-white transition metal . It has a remarkable resistance to corrosion and is considered a precious metal . In the periodic table it is in group 10, in the old counting part of the 8th subgroup , or nickel group .

Platinum is used to make jewelry , automotive catalysts , laboratory equipment , dental implants used and contact materials. Because of its rarity, only small amounts are extracted each year. It is a little reactive metal and is often found in its metallic form. Some platinum-containing complexes such as cisplatin are used in chemotherapy for certain types of cancer.

The name is derived from the Spanish word platina , the negative diminutive of plata "silver". The first European mention comes from the Italian humanist Julius Caesar Scaliger . He describes a mysterious white metal that evaded all attempts at melting. A more detailed description of the properties can be found in a report by Antonio de Ulloa published in 1748 .

Platinum was probably first used around 3000 BC in ancient Egypt . The British researcher Sir William Matthew Flinders Petrie (1853–1942) discovered ancient Egyptian jewelry in 1895 and found that small amounts of platinum were also used.

Platinum was also used by the Indians of South America. It was found as an accompaniment to the extraction of gold dust in the washed gold and could not be explicitly separated. The blacksmiths at that time unconsciously exploited the fact that native platinum grains with gold dust can be welded well in the embers of a charcoal fire fanned with bellows, the gold acting like a solder and, through repeated forging and heating, a relatively homogeneous, light color in the forging heat let produce deformable metal alloy. This could not be melted again and was just as durable as gold, but of a whitish-silver-like color. Even an approximately 15 percent platinum content leads to a light gray color. However, pure platinum was still unknown.

In the 17th century, platinum became a major problem in the Spanish colonies as an annoying material when prospecting for gold. It was thought to be “immature” gold and was thrown back into the rivers of Ecuador . Since it has a specific gravity similar to gold and did not tarnish even in fire, it was used to falsify the same. The Spanish government then issued an export ban. She even considered dumping all the platinum she had received up to then in the sea to forestall and deter platinum smuggling and counterfeiting.

The alchemy of the 18th century was called for, because the differentiation from pure gold and the extraction turned out to be extremely difficult with the techniques of the time. But interest was aroused. In 1748 Antonio de Ulloa published a detailed report on the properties of this metal. In 1750 the English doctor William Brownrigg made purified platinum powder. In 1783, Louis Bernard Guyton de Morveau found a simple process for the industrial production of platinum.

Platinum as a mineral and occurrence 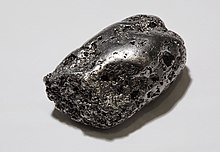 Some platinum nuggets from California (USA) and Sierra Leone

Platinum occurs naturally , i.e. in elemental form, and is therefore recognized as a mineral by the International Mineralogical Association (IMA) . In the systematics of minerals according to Strunz (9th edition) it is in the mineral class of "elements" and the department of "metals and intermetallic compounds", where it is named after the subdivision "platinum group elements" together with iridium , palladium and rhodium forms the unnamed group 1.AF.10 . In the outdated, but still in use, 8th edition , platinum had the system no. I / A.14-70 (elements - metals, alloys, intermetallic compounds).

The most important platinum mining nations in 2011 were South Africa with 139 tons (91 percent of the world production of 192 tons was 91 percent), Russia with 26 tons and Canada with 10 tons ( see also: Production by country - platinum ).

Platinum is also found in the form of chemical compounds in numerous minerals. Around 50 platinum minerals are known to date (as of 2011). 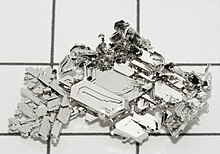 Metallic platinum (platinum soaps) is practically no longer mined today. There is extensive platinum mining only in the South African Bushveld Complex , also at the Great Dyke in Zimbabwe and in the Stillwater Complex in Montana . The South African mines belong e.g. B. Lonmin , Anglo American Platinum or Impala Platinum .

Sources of platinum are also non-ferrous metal production (copper and nickel) in Greater Sudbury (Ontario) and Norilsk (Russia). The platinum group metals are obtained here as a by-product of nickel refining . Platinum metal is the name given to five metals whose chemical behavior is so similar to platinum that separation and pure representation used to make great difficulties. In 1803 iridium , osmium , palladium and rhodium were discovered; Ruthenium followed in 1844 .

Platinum sponge is formed when ammonium hexachloroplatinate (IV) (NH 4 ) 2 [PtCl 6 ] is annealed or when paper that is soaked with platinum salt solutions is heated.

To recycle platinum, it is either dissolved oxidatively in aqua regia , a mixture of nitric and hydrochloric acid, or in a mixture of sulfuric acid and hydrogen peroxide . Platinum is then present in these solutions in the form of complex compounds (e.g. in the case of aqua regia as hexachloroplatinic acid ) and can be recovered from it by reduction . Researchers at National Chung Hsiang University (Taiwan) have developed a novel process in which platinum is electrochemically dissolved in a mixture of zinc chloride and a special ionic liquid . An ionic liquid is an organic salt that is already molten at temperatures below 100 ° C and has a high conductivity. The used platinum is used in the form of an electrode, which is connected as an anode , and the surrounding ionic liquid is heated to around 100 ° C. The platinum dissolves oxidatively. The dissolved platinum can then be deposited again as pure metal on a carrier electrode.

Platinum is a corrosion-resistant , malleable and soft heavy metal.

Due to its high durability, tarnish resistance and rarity , platinum is particularly suitable for the production of high-quality jewelry.

In powder form, depending on the grain size, platinum is gray (production- related after the decomposition of (NH 4 ) 2 [PtCl 6 ]) to black (platinum black), odorless and flammable. The metal in compact form is not flammable.

Like the other metals of the platinum group, platinum shows contradicting behavior. On the one hand it is chemically inert, as is typical of noble metals , on the other hand it is highly reactive, catalytically selective towards certain substances and reaction conditions. Platinum shows stable behavior even at high temperatures. It is therefore of interest for many industrial applications. 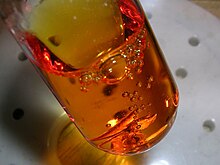 It is insoluble in hydrochloric and nitric acid alone. In hot aqua regia , a mixture of hydrochloric and nitric acid, it is attacked with the formation of red-brown hexachloroplatinum (IV) acid . However, platinum is also strongly attacked by hydrochloric acid in the presence of oxygen and by hot, smoking nitric acid. Platinum is also attacked by alkali, peroxide, nitrate, sulfide, cyanide and other molten salts. Many metals form alloys with platinum , for example iron , nickel , copper , cobalt , gold , tungsten , gallium , tin, etc. It should be emphasized that platinum sometimes reacts to form compounds with hot sulfur , phosphorus , boron , silicon , carbon in any form , that means also in hot flame gases. Many oxides also react with platinum, which is why only certain materials can be used as crucible material. When melting the metal with a propane- oxygen flame, for example, a neutral to slightly oxidizing flame must be used. The best option is the flame-free electrical-inductive heating of the melting material in zirconium oxide ceramics .

Both hydrogen , oxygen and other gases are bound by platinum in the activated state. It therefore has remarkable catalytic properties; In its presence, hydrogen and oxygen react explosively to form water . It is also the catalytically active species in catalytic reforming . However, platinum catalysts quickly become inactive (poisoned) due to aging and contamination and must be regenerated. Porous platinum, which has a particularly large surface, is also known as a platinum sponge . The large surface area results in better catalytic properties. Also, due to the large surface area formerly metallic platinum was deposited on asbestos ( platinum asbestos used), and as a catalyst. Today platinum-quartz wool is used for this purpose because of the asbestos problem .

Because of their availability and excellent properties, there are numerous different areas of application for platinum and platinum alloys. Platinum is a favored material for the manufacture of laboratory equipment because it does not produce any flame color . There are z. B. thin platinum wires are used to hold fabric samples in the flame of a Bunsen burner .

Platinum is also used in an almost unmanageable number of areas:

The most common material for the devices for the production of optical glass is pure Pt or Pt with 0.3 to 1.0% Ir for the crucibles and pipe systems as well as PtRh 3 to PtRh 10 for highly mechanically stressed devices such as stirrers.

The main problem when machining these materials is the limited weldability in the manufacture of the equipment.

The international kilogram prototype , which is kept in a safe of the Bureau International des Poids et Mesures (BIPM), consists of an alloy of 90% platinum and 10% iridium.

The international meter prototype from 1889 , which defined the meter until 1960, is made from the same alloy .

According to Note 4.B to Chapter 71, platinum, iridium , osmium , palladium , rhodium and ruthenium are considered to be platinum in the sense of the combined nomenclature .

The ODS and FKS materials have roughly the same physical properties, but are made with yttrium or zirconium oxide for patent reasons.

These alloys are used by specialty glass manufacturers such as Hoya and Asahi in Japan, Corning in the USA, Saint-Gobain in France and Schott in Germany for countless devices in glass melting technology.

The name for platinum, which is traded on the stock exchange, is XPT. The international securities identification number (ISIN) in exchange trading is XC0009665545.