A chemical compound is a pure substance that consists of atoms of two or more chemical elements , whereby - in contrast to mixtures - the types of atoms are in a fixed ratio to one another. The numerical ratio of the atoms to each other is determined by chemical bonds between the atoms, and the ratio can be represented in a sum formula . However, a molecular formula is often ambiguous, since isomeric compounds have the same molecular formula but are different compounds. Every chemical compound is characterized by its unique chemical structure .

There are basically four types of chemical compounds with regard to the type of bond between the elements involved:

A more precise differentiation of compounds and their assignment to one of these four types can be made with the help of the electronegativity difference of the elements involved in the bond. There are also transitional forms between the four above. Ideal types. 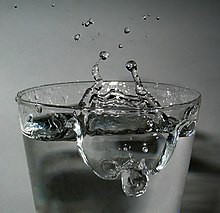 Molecular compounds arise from non-metal and non-metal - they are non-conductors (insulators) with mostly relatively low boiling points (with the exception of diamond-like or plastic-like compounds with giant molecules).

The smallest particles of molecular compounds are neutral groups of atoms (molecules). These consist of two atoms (for example in carbon monoxide, CO), of three atoms (for example in carbon dioxide) or also of a few thousand or ten thousand atoms (giant molecules, polymers , for example in the plastic polyethylene or in the genome molecule deoxyribonucleic acid DNA). The atoms in the molecules are linked by covalent bonds , which means that the connected atoms share pairs of external electrons (electron pair bond ). 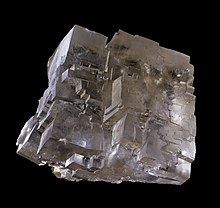 Ionic compounds ( salts ) consist of cations and anions . They are often salty:

The ions are created during the reaction of metal and non-metal atoms because the metal atoms release electrons ( oxidation ), which are then taken up by the non- metal atoms ( reduction ). The metal cations and non-metal anions formed in this way combine to form ion crystals due to the electrical forces of attraction. After the non-metals, a distinction is made in ionic compounds, for example, oxides (oxygen as anion), sulfides (with sulfur), fluorides , chlorides , bromides , iodides , nitrides (with nitrogen), carbides (with carbon), hydrides (with hydrogen) etc. Often, oxygen is added as a third element; one then speaks of sulfates , chlorates , nitrates , carbonates , etc.

Intermetallic compounds (often referred to colloquially as alloys ) are made from metal and metal - they are:

The combination of different metals to form alloys can take place in any proportions, especially when pouring metal melts together.

However, if “intermetallic compounds” are formed, the elements involved are only contained in them in very specific proportions (“intermetallic phase”, “ stoichiometric composition”).

Examples of alloys are bronze (made of copper and tin), brass (copper with zinc), and cupronickel (as a coin metal). Examples of intermetallic compounds are those between magnesium and germanium (formula: Mg 2 Ge ), Al 2 Cu, the magnesium silicide Mg 2 Si, the bronze Cu 4 Sn and the cementite Fe 3 C (made of iron and carbon, which is like a metal behaves) and WC ( tungsten carbide ).

The blood pigment hemoglobin - an iron complex in the blood, the structure of which changes with the uptake (oxygenation) or release of oxygen (deoxygenation) ( complex formation reaction ).

Chemical compounds can also be classified according to the number of chemical elements involved.

Binary compounds are made up of two different elements and have the general formula A x B y . Hydrogen chloride (HCl), sodium fluoride (NaF) and water (H 2 O) each consist of two elements and are therefore all binary compounds. The compounds can be molecular, ionic (salts) or intermetallic compounds.

Similarly, ternary compounds are composed of three different elements, such as sodium carbonate (Na 2 CO 3 ), which is composed of sodium, carbon and oxygen.

A quaternary compound is, for example, potassium hydrogen carbonate (KHCO 3 ).

The term primary compound , on the other hand, makes no sense, since by definition chemical compounds must be composed of at least two elements. Different substances from just one element are called modifications . Occasionally the term element connection is also used.

Molecular compounds that contain carbon in combination with hydrogen are referred to as "organic". They form the vast majority of all chemical compounds and are derived from methane gas , the group of alkanes or hydrocarbons . In the hydrocarbon framework of organic compounds there are often other atomic groups that influence the properties of the organic compound.

According to the carbon structure, organic compounds are divided into:

According to the functional groups , organic compounds are divided into

There are also organic salts, e.g. B. Hydrochlorides and Hydrobromides . As compounds of the by definition inorganic carbonic acid (H 2 CO 3 ), carbonates are not included.