This article deals with the chemical group of substances. For the physical term see ether (physics) . For the cryptocurrency unit, see Ether , for the EP, see Ether (EP) .

In chemistry, ethers (also called ethers ) are organic compounds that have an ether group as a functional group - an oxygen atom that is substituted by two organyl radicals (R 1 –O – R 2 ). In colloquial language, ether often also refers to diethyl ether (H 5 C 2 –O – C 2 H 5 ), one of the most important and simplest ethers. If both radicals on the oxygen bridge are aliphatic , these ethers are also referred to as alkoxyalkanes according to IUPAC .

Ethers are common compounds in nature. The glycosidic bond of the polysaccharides is an oxygen bridge between two carbon atoms; these acetals are in fact intramolecular , geminally arranged di-ethers. Many other natural substances , such as B. the aromatic substances anethole , 1,8-cineole , eugenol and vanillin , as well as the groups of ubiquinones and strobilurins and many drugs are ethers. 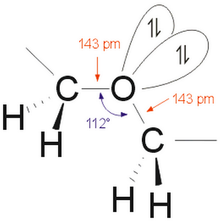 Structure and bonding of the ethers

Generally, an ether can be used as

being represented. R 1 and R 2 are here alkyl or aryl radicals which, in the case of a cyclic ether, are bonded to one another. Alkyl aryl ethers are also possible (see anisole and vanillin ). The bonding relationships in ethers are similar to those in alcohols and in water , which can be understood as the basic structure of these two classes of compounds. Carbon and oxygen atoms are each hybridized sp 3 . This leads to a tetrahedral arrangement of the atomic orbitals around all atoms involved. The bond angle of the oxygen is widened to 112 ° due to the more voluminous alkyl substituents compared to hydrogen (104.5 ° in H 2 O). At about 143 pm, the C – O bonds are  as long as in alcohols.

According to the IUPAC nomenclature , aliphatic ethers are referred to as alkoxyalkanes: R 1 -O-R 2 , the group O-R 2 being treated as an alkoxy substituent of an alkane chain R 1 . The lower-ranking substituent of the chain is the alkoxy radical (–O – R 2 ), the higher-ranking one forms the stem of the substance name. Names also approved by IUPAC are formed by naming the two alkyl radicals and the ending ether and are particularly common for small, aliphatic ethers. In the case of symmetrical ethers, the designation is then very simply possible by putting a Di in front of it [e.g. E.g .: diethyl ether (ethoxyethane) or dimethyl ether (methoxymethane)]. Cyclic and aromatic ethers are almost all known only by their common name.

The alkoxyalkanes are named accordingly. Examples:

Cyclic ethers are considered to be cycloalkanes in which one (or more) carbon atoms have been replaced by (an) oxygen atom (s). To make this clear, the syllable " Oxa " is inserted at the appropriate position in accordance with the Hantzsch-Widman system . Example:

The compound is led almost exclusively under the name tetrahydropyran , the IUPAC name is oxacyclohexane. The compound is cyclic ( cyclo ), has a ring size of 6 atoms ( hexane ) and at one position a carbon atom has been replaced by an oxygen atom ( oxa ). Correspondingly, the name 4-fluoroxacyclohexane or more commonly used applies to the following compound: 4-fluorotetrahydropyran [the heteroatom (oxygen, O) in the ring is assigned position 1].

Most ethers are relatively inert and are therefore often used as solvents in preparative organic chemistry . Since higher ethers can form poor hydrogen bonds due to increasing steric hindrances , the solubility in water decreases rapidly with increasing size of the alkyl radical .

In strong acids, however, ethers are readily soluble because of the protonation that takes place with the formation of oxonium ions .

The physical properties of the ethers differ significantly from those of the corresponding alcohols with a similar molar mass . The melting and boiling points of the ethers are considerably lower than those of the comparable alcohols, see the alcohol morphine ( melting point 253 ° C) and its methoxy ether codeine ( melting point 157 ° C). Similar to alcohols, the high electronegativity of oxygen essentially determines the properties of ethers. In the case of cyclic ethers in particular, this leads to the formation of a pronounced dipole moment. In addition, the polar oxygen atom is more exposed in a cyclic structure. This is evidenced by the water solubility of some cyclic ethers.

The low dipole moment of 1,4-dioxane is caused by its symmetrical structure: the two oxygen atoms opposite each other in the ring reduce the overall polarity of the molecule.

Various synthetic routes are possible for ethers . The best known mechanism is the Williamson ether synthesis . Here, a is alkali - alcoholate with a haloalkane implemented, wherein in addition to the corresponding alkali metal halogen - salt (not shown), the ether is formed.

The reaction proceeds according to an S N 2 mechanism and is used to prepare simple and mixed ethers. Elimination can occur as a side reaction , which is why the application of the Williamson ether synthesis with tertiary haloalkanes does not make sense.

The Williamson ether synthesis leads to cyclic ethers in an intramolecular reaction. The simplest representative of this class is oxacyclopropane ( ethylene oxide , oxirane); the best-known representative is tetrahydrofuran (THF), a popular solvent in organic chemistry.

With acid catalysis (here sulfuric acid ), two molecules of alcohol (shown using the example of ethanol ) can be condensed to an ether (here diethyl ether ) with elimination of water :

If only one type of alcohol is used (here ethanol), symmetrical ethers (R – O – R) can be represented in this way. If mixtures of z. For example, two alcohols (e.g. R 1 –OH and R 2 –OH) can result in three different ethers under the action of sulfuric acid or phosphoric acid :

Addition of alcohols to double bonds

Alcohols can add to double bonds , the proton of an added acid first being electrophilically added to the double bond. The alcohol then accumulates in a nucleophilic manner , and after subsequent deprotonation, the ether is formed:

In addition to the “normal” ethers, i.e. alkyl radicals with an oxygen bridge, there are also analogues with relatives of oxygen. In the 6th main group , oxygen is followed by sulfur . This forms so-called thioethers in accordance with the rules described above. In these, the oxygen bridge is replaced by a sulfur bridge. Among the best known thioethers include the "mustard gas" or sulfur mustard and the amino acid methionine .

Crown ethers are a special group of cyclic ethers, which deserve mention because of their importance in the chemistry of living things as well as in technical chemistry. In general, they are cyclic ethers, which consist of 1,2-diethers bonded to one another. The common nomenclature of crown ethers is unusual. One of the simplest crown ethers is [12] crown-4 . Here [12] gives the total number of atoms (without hydrogen atoms) in the cyclic ether substructure and -4 the number of oxygen atoms in this part of the molecule. Crown ethers have the unique ability to bind metal atoms (or metal ions) in a kind of cage structure and thus serve as building blocks for transport systems for these metals.

Long-chain links of the species

are called polyethers (also polyalkylene glycols , polyether polyols , polyalkylene oxides ). Examples of this group of polymeric ethers are polyethylene glycol and polypropylene glycol , both of which are produced by catalytic polymerization of the corresponding epoxides ( oxiranes ), ethylene oxide and propylene oxide , respectively. In the case of polyethylene glycol and polypropylene glycol, all residues (R 1 , R 2 , R 3 ...) are identical with the exception of the end links of the chains. A wide variety of polymers can be produced when epoxides are reacted with diols . The addition of a simple alkanol stops the polymerization.

Polyether polyol (precursors for polyurethanes ): Oxygen atoms of the ether bridges are marked in blue ; Terminal hydroxyl groups are essential for the reaction with diisocyanates to form polyurethanes (PU).

In addition to diols, polyhydric alcohols, such as. B. glycerol , 1,1,1-trimethylolpropane (TMP), pentaerythritol or sorbitol can be reacted with epoxides in the presence of strong bases (z. B. KOH) to give polyether polyols. The monomeric polyols act as a kind of starter for the base-catalyzed ring-opening polymerization of oxiranes. The acid-catalyzed ring-opening polymerization of tetrahydrofuran to give the polyether diol polytetramethylene glycol (PTMEG), also known as polytetrahydrofuran (PolyTHF), is analogous to this . Polyether triols are obtained from monomeric triols (glycerol, TMP) with epoxides. The polymerization results in mixtures which differ in the molar mass distribution of the individual polyether triol molecules and in the chain lengths of the ether sequences. Block copolymers can be produced in a targeted manner by sequential polymerization with different epoxides, copolymers with external ethylene oxide units having primary, those with external propylene oxide units having secondary hydroxyl groups (with reduced reactivity ). To characterize polyether polyols, the hydroxyl number (OH number) is often given, the numerical value of which increases with the functionality of the monomeric polyol and decreases with the molar mass of the polyether polyol. Common polyether polyols are Lupranol (BASF) and Desmophen (Covestro). Even epoxy resins are polyether having terminal epoxide groups. Polyether diols, such as. B. polyethylene glycol, are important precursors in the reaction with isocyanates to form polyurethanes .

When ethers are stored in light, they form peroxides with atmospheric oxygen . These can accumulate in the residue during the (vacuum) distillation of an ether and lead to explosions.

Autoxidation of ethers, shown using diethyl ether as an example. The diethyl ether radical (1-ethoxyethyl radical ) A reacts with atmospheric oxygen to form the peroxide radical B and then to the peroxide and the radical A , which continues the chain reaction .

In the α-position to the oxygen atom, a hydrogen atom is abstracted to form a radical and a peroxide is formed with oxygen . Methyl tert-butyl ether (MTBE) is an exception , as it does not have an α hydrogen atom on the tert- butyl side and the formation of a radical on the methyl side is too unfavorable. The peroxides can usually be detected by the brown discoloration of acetic acid iodide solutions. In the process, iodide is oxidized to iodine, which reacts with iodide to form I 3 - and is responsible for the brown color. Special test sticks are also available in stores. Peroxides can be destroyed, for example, with iron (II) salts. The storage of ethers for laboratory use should therefore only take place in small containers with exclusion of light, metal jugs are ideal because of their opacity. Ether that has been stored for a long time and especially when the container is only partially filled should be checked for peroxides before use. Cyclic ethers such as tetrahydrofuran and dioxane are more prone to peroxide formation than acyclic ethers.

When dealing with lower ethers, their low boiling point and easy flammability should never be underestimated. (Diethyl) ether-air mixtures between 2 and 36% by volume of ether are explosive . It is important that ether vapors are not only colorless, but also heavier than air. So they collect in deep places. Due to this fact and the narcotic effect of ethers, they are only to be used in well-functioning fume cupboards .

Due to their ambivalent character, most ethers are excellent solvents and dissolve many water-insoluble compounds. Most of the diethyl ether produced is used as a solvent in the chemical and medical industry and in laboratory use.