This article deals with the theater critic, for the medic see Friedrich Luft (medic) 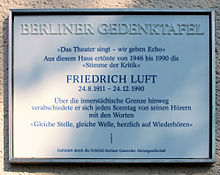 Memorial plaque on Friedrich Luft's house, with the signature of the graphic by Friedrich Dürrenmatt

Friedrich Luft in his apartment on Nollendorfplatz , 1985

Friedrich Luft was the son of a German teacher and a Scottish mother. His older brother was the German-American physiologist and university professor Ulrich Cameron Luft . Friedrich Luft grew up in Friedenauer Kaiserallee 74 (today: Bundesallee ) and attended the nearby Friedenau grammar school on Maybachplatz (today: Perelsplatz ). He studied German , English and history in Berlin and Königsberg . He listened to Max Herrmann 's lectures on theater history with great interest . From 1936 he was a freelance author . He wrote feature articles for the Berliner Tageblatt and the Deutsche Allgemeine Zeitung . He wrote numerous scripts for the Heeresfilmstelle , for example for the films The Carrier Pigeon in Action and The Horse and the Gas Mask for the Horse . He also produced texts for the cabaret artist Werner Finck . In 1940 he married the illustrator Heide Thilo.

Immediately after the Second World War , he first worked for the Tagesspiegel, which was founded in 1945 . He had a column entitled Urbanus with everyday sketches from the post-war Berlin period that are still worth reading . These were published in 1948 by Suhrkamp Verlag under the title Daily papers by Urbanus . The Neue Zeitung , founded in 1947 by the US occupation forces, took him into service as the feature editor of its Berlin edition, as a theater and film critic until it ceased publication in 1955.

In 1959 he wrote the subtle 27-page preface for the autobiography Spiel im Dasein by Max Ophüls , the Saarbrücken- based theater and film director ( Lola Montez , Letters from a Stranger ) .

Above all, however, he was the "voice of criticism" at the radio station RIAS . Every Sunday lunchtime, from the first broadcast on February 9, 1946 - at that time still on DIAS (wire radio in the American sector) - until October 28, 1990 shortly before his death, he spoke in this role about Berlin theater premieres of the previous week. His rhetorical peculiarities were his fast and sometimes breathlessly choppy speaking, a sometimes drastic expression combined with baroque flourishes as well as the same, recurring saying goodbye to the listeners:

In addition to this, he also wrote articles for the Süddeutsche Zeitung and Die Welt . The German dialogue book for the David Lean classic Die Brücke am Kwai from 1957 also came from Luft .

Friedrich Luft spoke fluent English . He lived and worked for 50 years until his death near Nollendorfplatz in Schöneberger Maienstraße  4. A plaque commemorates the critic that was very popular in Berlin at the time. Luft was buried in the Dahlem forest cemetery. The common grave with his wife Heide, who worked as a graphic designer and illustrator, is in Dept. 8U-43. His grave is dedicated to the city of Berlin as an honorary grave .

In 1991 the "Friedrich-Luft-Archiv" was set up in the Academy of the Arts . It contains manuscripts of the reviews of his radio broadcast Voice of Criticism as well as a collection of Luft's newspaper reviews and glosses from the years 1945 to 1990, his library and a tape archive with recordings of his radio programs from the holdings of the RIAS.

The Berliner Morgenpost has been awarding the " Friedrich-Luft-Preis " since 1992 . This prize - currently endowed with 7,500 euros - honors the best Berlin theater performance every year.