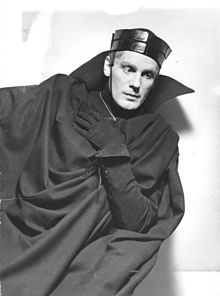 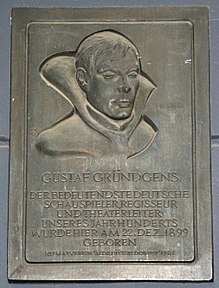 Plaque at the house where Gründgens was born in Düsseldorf, Graf-Adolf-Str. 92

Gründgens was the son of Arnold Hubert and Emmi Gründgens; Marita Gründgens was his younger sister. He spent his school days at the Oberrealschule am Fürstenwall in Düsseldorf, the Gymnasium Oberkassel (today: Comenius-Gymnasium) and the Gymnasium zu Mayen (today: Megina-Gymnasium Mayen ), which he left at Easter 1917 with the transfer to Obersekunda.

After a three-month commercial apprenticeship in Düsseldorf, he was drafted into the military in autumn 1917. However, he did not do any front duty with a weapon, but was transferred to the Saarlouis Front Theater with pretended stage experience , of which he became director in 1918 and which continued to exist in Thale after the war . Training he received in 1919-20 when Louise Dumont and Gustav Lindemann at the Academy of Performing Arts of the Schauspielhaus Dusseldorf . His teachers were Paul Henckels , Peter Esser and Elsa Dalands.

At the beginning of Gründgens' career there were short engagements at the Städtische Bühnen Halberstadt (season 1920/21), at the United Municipal Theater Kiel (season 1921/22), at the Berlin theater in the Kommandantenstraße (season 1922/23) and at the Kurtheater Eckernförde ( Summer season 1923), where he made his debut as a director in 1923. In 1923 he went to Erich Ziegel at the Hamburger Kammerspiele . During this time he expanded his repertoire of classical and contemporary pieces and staged a. a. Anja and Esther from Klaus Mann . Klaus Mann and his sister Erika played the leading roles together with Gründgens and Pamela Wedekind . In 1927, Klaus Mann's Revue for four followed, with the same main actors. Gründgens and Erika Mann married in 1926. They divorced in 1929.

In 1928 Gründgens went to Max Reinhardt at the Deutsches Theater in Berlin, where he also directed. From 1929 he directed the opera with great success and also took part in cabaret revues . At this time he also took on his first film roles . One of the most famous performances from this period is the role of Schränkers in M .

In 1930 he had greater success as a director with people at the hotel by Vicki Baum , a play for her novel, which was a worldwide success.

In 1932 Gründgens began working at the Prussian State Theater in Berlin . His first role was that of Mephistopheles in Goethe's Faust .

Gründgens stayed in Germany in 1933 and rose to the top of the career ladder in the Nazi Reich . In 1934 he was appointed director of the State Theater and state actor. Half a year after Ernst Röhm's murder , at the end of December 1934, he turned to his top employer, Hermann Göring, with a request to dismiss him from his position as director of the theater, referring to his homosexuality - without mentioning this expressis verbis . But Göring did not accept the resignation. At the Prussian State Theater on Gendarmenmarkt, Gründgens played Shakespeare's Hamlet in January 1936, directed by Lothar Müthels (with Käthe Gold as Ophelia and in the set by Rochus Gliese ), a performance that became the starting point for massive attacks from National Socialist circles around the party ideologist Alfred Rosenberg , since Gründgens' portrayal of Hamlet seemed to highlight the tragedy of a lonely intellectual in the midst of a criminal state and he allegedly performed sentences like “Time is out of joint” and “Denmark is a prison”. After attacks in the Völkischer Beobachter, Gründgens evaded to Switzerland in 1936, but returned shortly afterwards and was appointed by Göring to the Prussian State Council, in order - according to Gründgens - to prevent any arrest, which could only have taken place with Göring's personal consent as Prime Minister . Gründgens served as General Director of the Prussian State Theaters until 1945 and took advantage of the fact that they were subordinate to the Prussian Prime Minister Göring and not, like the other theaters, Reich Propaganda Minister Joseph Goebbels .

Gründgens also sporadically directed films and in 1938 took over the management of its own production group at UFA subsidiary Terra , where the films Zwei Welten (1939) and Friedemann Bach (1941) were made. Tanz auf dem Vulkan as a mixture of a period film and a revue film from 1938 showed a special theatrical performance by Gründgens'. He worked in propaganda films such as Ohm Krüger (1940/41).

When Joseph Goebbels proclaimed the " total war " on February 18, 1943 , Gründgens volunteered at the front and was temporarily used as a private in the occupied Netherlands. However, Göring ordered him back to Berlin in the spring of 1944. His name was henceforth on the God-favored list .

From 1945 to 1946 he was imprisoned in the special camp Jamlitz . As part of the denazification he was exonerated by many colleagues and in turn exonerated among many of the actress Emmy Göring (the widow of Hermann Göring ) and Veit Harlan , the director of the notorious anti-Semitic propaganda film Jud Suss . The decisive factor for his release from prison was Ernst Busch's intensive efforts , whom Gründgens had saved from the gallows during the Second World War through his intervention with Göring, as well as several other actors and employees who stood up for him personally or in writing. As early as 1946, Gründgens was back on the stage, initially in the Soviet sector of Berlin , and directed the Deutsches Theater and the Kammerspiele. From 1947 to 1955 he was general manager in Düsseldorf, first of the Städtische Bühnen , then of the Düsseldorfer Schauspielhaus . The records version of his Düsseldorf production of Faust , in 1954 at the Deutsche Grammophon on three talk plates appeared, is considered by many as the birth of today's audio book .

From 1955 Gründgens was general manager of the Deutsches Schauspielhaus in Hamburg , which he led to the height of his fame, and where he showed well-known classical and modern productions, cultivated a high speaking culture and gathered and shaped important actors around him; Only Elisabeth Flickenschildt , Joana Maria Gorvin and Will Quadflieg are mentioned . In 1960 he adapted his production of Faust in Hamburg (with which he also guested in Moscow and New York ) for the film, with Will Quadflieg as Faust and himself in the role of Mephisto - in the mask that has not changed since the 1930s would have. This film , which was also shown on television, was a huge hit with audiences.

Gründgens' grave in the Ohlsdorf cemetery

In the summer of 1963 he unexpectedly ended his directorship at the Deutsches Schauspielhaus and went on a world tour. On the night of October 6th to 7th, 1963, he died in Manila , Philippines , of a gastric bleeding caused by an overdose of sleeping pills ; whether it was suicide or accident was never clearly established. He wrote his legacy in this regard on an envelope: "I think I've taken too much sleeping pills, I'm a little strange, let me sleep in."

Gründgens 'grave is in the Ohlsdorf cemetery in Hamburg, very close to the main entrance (on the extreme southeastern edge of the Althamburg Memorial Cemetery ), next to Ida Ehres ' grave , the principal of the Hamburger Kammerspiele , and in close proximity to Jürgen Fehling . 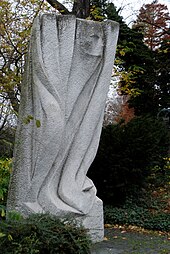 Gustaf Gründgens monument in the Hofgarten Düsseldorf , in the terrace garden on the north side of the Düsseldorf Schauspielhaus , statue by Peter Rübsam , 1984

“He didn't like to open the curtain behind which he hid himself. We don't want to be more intrusive after his death than during his lifetime. ”Inscription on the memorial in the courtyard garden

As an important actor and theater director, Gründgens remained in public memory for a relatively long time. He shaped numerous theater, film and television actors, especially during his time in Hamburg. A Gustaf Gründgens exhibition took place on his 80th birthday in the Dumont Lindemann archive in Düsseldorf, which, under the direction of Heinrich Riemenschneider , had compiled extensive documentation on Gründgens.

Rolf Badenhausen , who had played a central role in Gründgens' artistic work, judged him posthumously:

“As an actor, director and theater manager, Gustaf Gründgens was a personality that cannot be copied. His work ethic is applicable. He did not know a teachable method. "

Since 1960 Gründgens owned a holiday home on Madeira Island .

Gründgens as a literary subject

Klaus Mann's exile novel Mephisto from 1936 describes the career of his former brother-in-law Gründgens, clearly identifiable in the book as "Hendrik Höfgen", as a prime example of the opportunism of an artist at the beginning of the Third Reich. In distilling those morally questionable aspects of his ex-boyfriend's career, the novel exhibits a sharp personal tinge.

In response to the lawsuit brought by Gründgens' partner, adopted son and sole heir Peter Gorski , the Nymphenburger Verlag was banned from publishing the novel in the 1971 Mephisto decision of the Federal Constitutional Court, which is still valid today . Regardless of Mephisto's decision, a new edition was published in 1981 by Rowohlt Verlag . The novel was published in the GDR as early as 1956.

According to Klaus Mann , Mephisto is not a roman-clef : “This time-critical experiment is not about the individual case at all, but about the type.” On the question of why he had chosen Gründgens as the model for the figure of “Hendrik Höfgen”, he wrote in his Autobiography “The turning point”: “How had people lived, worked, discussed, drank with him [...] And now he was drinking, playing, discussing with the murderers? [...] It was decidedly scary to imagine this. "

Gründgens as a cinematic subject

The film Mephisto , based on the novel by Klaus Mann, was shot in 1981 by István Szabó with Klaus Maria Brandauer in the leading role.

In 2011, the “Gustaf Gründgens Prize” endowed with 15,000 euros was launched in Hamburg. This prize was initiated by the Ernst Deutsch Theater in Hamburg and Lions Clubs International and donated by the Mercedes-Benz Hamburg branch. The prize is intended to honor personalities who have shaped the performing arts in Hamburg and beyond with their life's work. The award is also intended to commemorate the important theater man Gustaf Gründgens, who wrote theater history as an actor, director and artistic director.

Theater photos by Gustaf Gründgens are mainly available from 1935 to 1963 by the important theater photographer Rosemarie Clausen , and for 1947 to 1951 also by Liselotte Strelow .