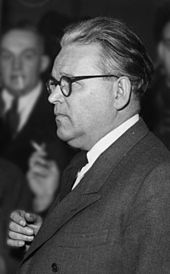 Veit Harlan during his trial in Hamburg in March 1949

Veit Harlan (born September 22, 1899 in Charlottenburg , † April 13, 1964 in Capri ) was a German actor and director . Because of his work as a director during the National Socialist era , including his propaganda films Jud Süss and Kolberg , Harlan is still controversial today.

Veit Harlan was born as the son of the writer Walter Harlan and his wife Adele. Boothby in Charlottenburg, born in their apartment at Savignyplatz 12 as the fourth child after his brother Walter, his sister Esther (1895–1975) and his brother Peter (1898–1966). He was followed by his brother Fritz Moritz (1901–1970) and his sisters Bertha Elise (1906–?) And Nele (1908–2004). After an apprenticeship as a silversmith and acting lessons at Max Reinhardt's seminar , Harlan appeared publicly on a theater stage for the first time in 1915.

In 1916 he volunteered as a war volunteer and was deployed on the Western Front.

Beginnings as an actor

After the First World War , in 1919 he became an acting trainee at the Berliner Volksbühne on what was then Bülowplatz, to whose permanent ensemble he belonged from 1920 to 1922. From the mid-1920s, Harlan also took on roles in film.

In 1922 Harlan left Berlin to temporarily gain experience in the provinces at the Landestheater in Meiningen and during the theater holidays as a member of the North German Holtorf Group, a traveling theater . In the same year he married the Jewish singer Dora Gerson , from whom he divorced after two years. Dora Gerson was murdered in Auschwitz-Birkenau concentration camp in 1943 . A request for help from Dora Gerson to Harlan went unanswered. In 1929 he married the actress Hilde Körber , with whom he had three children until the divorce nine years later: Thomas Christoph (1929–2010), Maria Christiane (1930–2018) and Susanne Christa (1932–1989). In 1933, in an interview with the Völkischer Beobachter, after the National Socialists came to power , Harlan confessed to their policies.

From the mid-1930s onwards, Harlan turned to directing and, in addition to comedies, increasingly made films that were ideologically influenced by National Socialism. In 1937, Reich Propaganda Minister Joseph Goebbels became aware of Harlan through the Nazi propaganda- style film Der Herrscher , which was awarded the “ National Film Prize ”, and from then on entrusted him with “politically valuable” film projects. Harlan also got the contract from Goebbels for the anti-Semitic inflammatory film Jud Suss . In addition to directing, Harlan was also involved in the script; his future wife Kristina Söderbaum , Heinrich George , Ferdinand Marian and Werner Krauss , who could even be seen in five roles, played the leading roles. This film, which was shown in Germany and Eastern Europe during the Second World War to strengthen anti-Semitism and thus to provide ideological support for the deportations of European Jews, later served as the main charge against Harlan.

In 1939 he married Kristina Söderbaum. This marriage resulted in two sons, Kristian (* 1939, called Tian) and Caspar (* 1946). Söderbaum took on the leading role in many of Harlan's films and was nicknamed "Reichswasserleiche" by the audience, as she often played the role of the tragic suicide - among other things, as the victim of "Jud Suss". In 1943, Harlan received the title of professor for the 25th anniversary of Universum Film AG (Ufa) . His status is also shown by the fact that from 1942 until the end of the National Socialist German Reich he was able to shoot all of his films (four in total) in Agfacolor . At the end of January 1945 he brought out the Agfacolor color film Kolberg , shot at Ufa with Heinrich George and Kristina Söderbaum in the lead roles , which was the most expensive film in the “ Third Reich ” with production costs of around 8 million Reichsmarks .

Veit Harlan immediately after his acquittal on April 23, 1949

After the end of the war, Harlan was classified as "exonerated" in a denazification process that was brought forward at his own request . On March 3, 1949, a jury trial was opened in Hamburg at the request of the VVN, chaired by Judge Walter Tyrolf . Tyrolf had worked as a public prosecutor at the Hamburg Special Court in 1944 . At the trial, Harlan was charged with "aiding and abetting" persecution under Control Council Act No. 10 . Harlan was acquitted on April 23, 1949, because he could not be proven guilty that was personally imputable and a criminally relevant causality between film and genocide could not be proven. Harlan supporters carried the acquitted out of the courtroom on their shoulders. The public prosecutor's office went into appeal. The Supreme Court for the British Zone in Cologne overturned the judgment because the film Jud Suss was "a not insignificant tool". In another trial before the Hamburg Regional Court , Harlan alleged that the National Socialists had abused his art, forced him to direct Jud Suss and that a refusal would have put him in a threatening position. The court - again chaired by Walter Tyrolf - followed this line of argument and acquitted Harlan on April 29, 1950.

The screenwriter and director Géza von Cziffra , who was active in Germany during the period of National Socialism, claimed in his 1975 autobiography Buy a Colorful Balloon that the production manager of the Terra film Peter Paul Brauer was originally intended to be directed by Jud Süß . But Harlan successfully fought through interventions in the Propaganda Ministry to be able to direct the film. Joseph Goebbels mentions Harlan several times in his diary entries:

“Discussed the Jud-Süßfilm with Harlan and Müller. Harlan, who is supposed to direct, has a lot of new ideas. He's revising the script again. "

“The Jud-Süß film in particular has now been greatly reworked by Harlan. That will be the anti-Semitic film. "

“Harlan film 'Jud-Süß'. A really great, brilliant litter. An anti-Semitic film that we can only wish for. I am pleased."

In 1951, the Hamburg Senate Director Erich Lüth called on the German audience to boycott Harlan's first post-war film Immortal Beloved . Carlo Schmid told the German Bundestag that Harlan had contributed to “ creating the mass psychological conditions for the gassings of Auschwitz ” and that it was a shame to show “Harlan's work”. In two legal proceedings, Lüth's call for a boycott was deemed “ immoral ” i. S. v. § 826 BGB classified. The civil courts therefore issued injunctions against Lüth. During these trials, Harlan declared that "any form of anti-Semitism should be rejected from a cultural, religious and moral standpoint". Lüth lodged a constitutional complaint against these court rulings with the Federal Constitutional Court , which overturned the decisions of the lower courts in a much noticed and cited decision of principle, the later so-called Lüth ruling . Even the civil courts would have to observe fundamental rights as a defining value system when interpreting indefinite legal terms such as “immorality”. In the specific case, the civil judges completely misjudged the importance of Article 5 (1) of the  Basic Law ( freedom of expression ) to the detriment of the complainant.

In 1957 the feature film Anders als du und ich appeared under Harlan's direction , which, under the scientific advice of Hans Giese, was originally intended to be a plea for the abolition of § 175, which was still valid at the time , but in the final version (enforced by the voluntary self-regulation of the film industry ) on the contrary, is often viewed as hostile to homosexuals. After a few more films Harlan died in 1964 during a vacation in Capri at a pneumonia . He was also buried there.

In addition to Harlan's spouses and children, it is worth mentioning his niece Christiane Kubrick , the widow of the director Stanley Kubrick , and his nephew Jan Harlan , the producer of several Kubrick films.

As a line producer and screenwriter