The title of this article is ambiguous. Further meanings are listed under Carlo Schmid (disambiguation) . 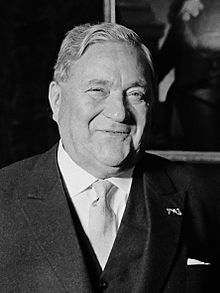 Schmid is one of the fathers of the Basic Law and the Godesberg Program of the SPD; he campaigned strongly for European integration and Franco-German reconciliation. He was a candidate for the office of Federal President in 1959 and Federal Council Minister from 1966 to 1969 .

Schmid's father Joseph Schmid (1860–1925), who came from Württemberg , was a private scholar and lecturer at the University of Toulouse , while his mother Anna Erra (* 1869) was French. Schmid spent his childhood in Weil der Stadt , where the family moved a year after his birth. There his father was headmaster and secondary school teacher for five years. In 1908 the family moved to Stuttgart , where Schmid attended the humanistic Karls-Gymnasium and passed his Abitur in the spring of 1914 . In his last school years Schmid became active in the Wandervogel , where he met Arnold Bergstraesser . He took part in the First World War as a soldier from 1914 to 1918 and fought at Verdun , among others ; his last rank was lieutenant in the reserve .

A study of law and political science that began in 1919 at the Eberhard Karls University in Tübingen , he completed in 1921 with the first state examination in law; the second state examination followed 1924. 1923 he was with the work of the legal nature of the works councils according to the Works Councils Act to Doctor juris doctorate .

He first settled as a lawyer in Reutlingen down, but resigned in 1925 as a court Assessor in the judicial service of the country Wuerttemberg one. From 1927 to 1931 he was a judge at the local court and later a regional judge in Tübingen .

From 1927 to 1928 he was on leave to work as a consultant at the Kaiser Wilhelm Institute for Foreign Public Law and International Law in Berlin. In 1929 he completed his habilitation at the University of Tübingen with a thesis on the case law of the Permanent International Court of Justice and worked there from 1930 as a private lecturer .

During the National Socialism

1931-1932 Schmid took over the management of a camp of the voluntary labor service in Münsingen . Unemployed young people worked together with students in a quarry with the aim of protecting the young people from the radical mass movement of National Socialism through their personal commitment . In 1933 Schmid's personnel file received a blocking notice due to his activities. To avoid being fired, he joined the Association of National Socialist German Lawyers . Nevertheless, he publicly referred to National Socialism as the “philosophy of cattle breeders, applied to the wrong object”. Serious consequences could only be prevented with the support of a Nazi student leader. In 1940 he was drafted into the Wehrmacht and until 1944 was assigned to the Oberfeldkommandantur in Lille / France as a war administrator (with the rank of major ) . In this function he was in contact with Helmuth James Graf von Moltke and the Kreisau Circle . In some cases he managed to save French citizens from retaliation by the Wehrmacht.

After the end of the war, Schmid changed his first name to Carlo in order to avoid confusion with the constitutional lawyer Carl Schmitt, who was burdened by his proximity to National Socialism . He played a key role in the reopening of the University of Tübingen and in the appointment of Romano Guardini , Wilhelm Weischedel , Eduard Spranger , Alfred Kühn and Adolf Butenandt to the university. From 1946 to 1953 he was professor of public law there . In 1953 he accepted the chair of political science at the Johann Wolfgang Goethe University in Frankfurt am Main . He also translated works by Machiavelli , Baudelaire and Malraux . His translation of Les Fleurs du Mal from 1947 is still considered groundbreaking today.

For Schmid it was clear at the end of 1946 that the “fate of the European states depended on” whether they could develop into an “independent force”. He therefore persistently advocated the economic, political and military integration of Europe. Leading social democrats like Kurt Schumacher considered Schmid's federal idea for Europe to be premature. One reason for this reluctance was the conservative British Duncan Sandys' strong commitment to the European movement . Despite this, Schmid sought international solidarity and worked for a long time in the Union of European Federalists . In 1949 Schmid became the first vice-president of the German section of the Europa-Union Deutschland . He was also the first chairman of the " German Parliamentary Section of the European Movement ". In France he entered a Masonic lodge ; he gave a speech twice in the Hamburg lodge Die Brückenbauer .

In 1949 Schmid founded the International Federation (IB) with Theodor Eschenburg , the former head of department of the Reich Youth Leadership Heinrich Hartmann, and the French occupation officer Henri Humblot , which, following the example of the volunteer working group , is supposed to give young people an opportunity for further training.

As early as August 1948 Schmid played a very important role in the Herrenchiemsee Constitutional Conference , which initiated the later Basic Law for the Federal Republic of Germany . He opposed efforts that wanted to grant the right of asylum only to Germans who were persecuted abroad because of their “standing up for freedom, democracy, social justice or world peace”. The editorial committee saw a general right of asylum for political refugees as “too extensive” because it “possibly includes the obligation to receive, care, etc.” and is therefore not financially viable. Together with Hermann von Mangoldt (CDU), Schmid prevailed against these concerns and achieved that, with Article 16 of the Basic Law, the Federal Republic of Germany guaranteed all those politically persecuted in the world a right to asylum. This wording existed until the asylum compromise of 1993, which severely restricted this right.

Carlo Schmid (left) in conversation with Egon Bahr in 1976

Schmid belonged with Fritz Erler , Herbert Wehner and Willy Brandt to the so-called breakfast cartel of the SPD, which prevailed until 1958 with its ideas of party reform.

Since Federal President Theodor Heuss was no longer allowed to run after two terms in office, the SPD nominated Schmid as its candidate in the election of the German Federal President in 1959 , in which he was defeated by the previous Federal Minister for Food, Agriculture and Forests Heinrich Lübke (CDU) in the second ballot.

In 1961 and 1965 Schmid was part of Willy Brandt's government team in the event of a change of government . He was planned as foreign minister.

In 1947 Schmid was elected to the state parliament for Württemberg-Hohenzollern , to which he belonged until the state was incorporated into Baden-Württemberg on May 17, 1952. 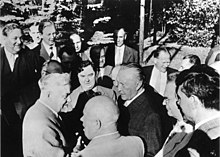 Carlo Schmid (top left) in September 1955 with Adenauer in Moscow

In 1955, as a member of the negotiating commission under Konrad Adenauer, he made a major contribution to the success of the German-Soviet negotiations in Moscow, which resulted in the establishment of diplomatic relations between the Federal Republic of Germany and the Soviet Union and the repatriation of German prisoners of war . During his entire membership in the Bundestag, Schmid represented the Mannheim I constituency as a directly elected member . From October 12, 1959 to 1961, he was chairman of the “Budget” sub-commission of the Bundestag Presidium. In his last electoral term he was the second oldest member of the Bundestag after William Borm ( FDP ).

In 1959, after the accidental death of MP Josef Gockeln , he and Josef Arndgen ( CDU ), Walther Kühn (FDP) and Ludwig Schneider ( DP ) were among the initiators of pension, disability and survivors' benefits for members of parliament.

Schmid, who was particularly committed to Franco-German reconciliation, was a member of the Parliamentary Assembly of the Council of Europe in Strasbourg from 1950 to 1960 and from 1969 to 1973 . From 1963 to 1966 he was President of the Assembly of the Western European Union in Paris , after having been its Deputy President since 1956.

At the time of the French occupation in October 1945, Schmid headed the provisional government (President of the State Secretariat) of the "State Secretariat for the French-occupied territory of Württemberg and Hohenzollern". At the same time, he took over the post of country director for education and cultural affairs in the national administration set up by the French military government.

From December 9, 1946, Schmid was Minister of Justice of Württemberg-Hohenzollern and until July 8, 1947 he also held the position of President . After the state elections in 1947, Carlo Schmid was Deputy President of the State until August 12, 1948, and until May 1, 1950 he retained the office of Minister of Justice in the state government of this country led by Lorenz Bock (CDU) or his successor Gebhard Müller , which he also held at the Constitutional Convention represented on Herrenchiemsee .

From 1969 until his death he was the coordinator for Franco-German relations .

In 1955 Schmid was awarded the Grand Cross of the Order of Merit of the Federal Republic of Germany. In 1958 he was honored with the order against seriousness as a Bundestag Vice President for his witty and quick-witted speeches . In 1976 he received the Medal of Merit of the State of Baden-Württemberg and the German-French translator award, donated by the Baden-Baden spa and spa administration, for his translation of André Malraux's work Eichen, which one falls . He was also the recipient of the Hansian Goethe Prize from the Alfred Toepfer Foundation . Schmid received the Goethe Prize from the city of Frankfurt am Main in 1967 . Since 1970 he was an honorary citizen of Mannheim and since 1977 of Tübingen .

Four days after his death, the German Bundestag honored its former Vice President with a memorial service in the plenary hall. On December 15, 1979 he was honored with a state funeral at the Tübingen city cemetery .

His estate is kept in the archive of social democracy .

The Carlo Schmid Foundation was established in 1987, which awards the Carlo Schmid Prize to people, groups and organizations who work for the maintenance and further development of the democratic and social constitutional state, a liberal political culture and European understanding. On December 3, 1996 , the Federal Ministry of Post and Telecommunications issued a special postage stamp worth 100 pfennigs on his 100th birthday .

Schmid worked as a scientist, state-philosophical and political publicist, essayist, memorandum writer, but also as a translator, stage and cabaret writer and poet.

Federal Minister of the Federal Republic of Germany

Chairwoman of the Foreign Affairs Committee of the German Bundestag