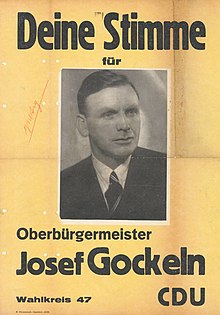 Josef Gockeln on a state election poster in 1950

After an apprenticeship as a miller in Großeneder, Gockeln attended the State College for Business and Administration in Düsseldorf in 1925/26 . He became a member of the Christian trade union and the Catholic labor movement . From 1928 he worked full-time as the district secretary of the Catholic workers' associations in Düsseldorf. Gockeln was a soldier throughout the Second World War.

In 1946 Gockeln was elected chairman of the Catholic workers' associations in West Germany and in 1948 he was president of the first German Catholic Day after the Second World War.

In 1950 he was appointed Knight of the Order of Knights of the Holy Sepulcher by Cardinal Grand Master Nicola Cardinal Canali and invested in Cologne Cathedral on December 7, 1950 by Lorenz Jaeger , Grand Prior of the German Lieutenancy ; he was its grand officer . He was instrumental in rebuilding the German Lieutenancy in the 1950s.

On December 6, 1958, Gockeln was killed in a traffic accident.

Gockeln belonged in the Weimar Republic, the Center Party and was Vice Chairman of the District Association Dusseldorf. He was one of the co-founders of the CDU in Düsseldorf . In 1945/46 he was chairman of the program commission of the Rhineland regional association .

Gockeln was city ​​councilor in Düsseldorf from 1929 to 1933 and again from 1946 . In 1946 he became a member of the state parliament of North Rhine-Westphalia and remained a member of parliament until his accidental death in 1958. On May 19, 1947, the state parliament elected him President. He also held this office until 1958. Gockeln was a member of the German Bundestag from the first federal election in 1949 until his death. He was directly elected in 1949 in the Düsseldorf II constituency and in 1953 and 1957 in the neighboring Düsseldorf I constituency.

During his lifetime, Gockeln was one of the most ardent advocates of a parliamentary pension for old age and especially for the bereaved, "so that in the long run not only wealthy people who can provide for their own private means will sit in parliaments". It was only after his accidental death that a group of 34 members of the Bundestag led by Josef Arndgen (CDU), Walther Kühn ( FDP ), Carlo Schmid ( SPD ) and Ludwig Schneider ( DP ) brought a corresponding bill on old-age, disability and survivors' pensions for members of the Bundestag a. Until then, the Lord Mayor and the President of the State Parliament were still without pension entitlements. At the time, these positions were only paid an honorary salary.

Gockeln was Minister of Social Affairs in North Rhine-Westphalia from 1946 to 1947 . On July 3, 1947, he became Lord Mayor of Düsseldorf, which he remained until the local elections in 1956.

President of the state parliament of North Rhine-Westphalia