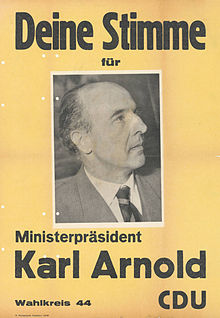 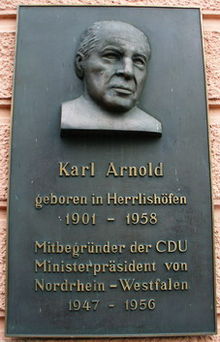 Karl Arnold completed an apprenticeship as a shoemaker after primary school, which he completed as a journeyman in 1919. In 1920 and 1921 he studied at the Leohaus Social University in Munich ; In autumn 1921 he moved to Düsseldorf to take a position as a functionary at the Christian Leather Workers' Association. He saw himself as a Christian socialist all his life .

From 1934 Arnold was co-owner of an installation business in Düsseldorf. The Gestapo observed and persecuted him during the Third Reich . In the course of the Gewitter action , Arnold was arrested in August 1944, but released shortly afterwards for lack of evidence.

In December 1945 Arnold and Hans Böckler participated in the founding of the unified trade unions, today's DGB , in the Rhineland. Arnold presided over the Düsseldorf district. Together with other licensees, he received the daily newspaper license for the Christian-oriented Rheinische Post from the British occupying power , which is still partially owned by his descendants. In 1956 he became a member of the academic Catholic student association Unitas Reichenstein Aachen.

In 1958 he was elected chairman of the CDU social committees as the successor to Jakob Kaiser . In the state elections on July 6th that year , Arnold was the top candidate of the CDU North Rhine-Westphalia .

Arnold returned to Düsseldorf from a rally in Minden in the early morning of June 29, 1958 and suffered a heart attack in his apartment.

He was buried in the southern cemetery in a grave of honor in the city of Düsseldorf.

Arnold joined the Center Party in 1920. In 1924 Arnold became secretary of the Christian Leather Workers' Association in Düsseldorf. Two years later he was already head of the Düsseldorf district cartel of the Christian trade unions. From 1925 to 1933 he was a city ​​councilor in Düsseldorf. In 1929 he was elected to the city council of Düsseldorf, where he took over the deputy chairmanship of the Center Party . After the Second World War he resumed his political activities and in 1945 founded the Düsseldorf Christian Democratic Party , which later became part of the CDU. With Jakob Kaiser he belonged to the group of former Christian trade union leaders who advocated the socialization of key industries within the CDU. He belonged to the left wing of his party. After the first federal election , Arnold was one of the supporters of a grand coalition in the CDU , but could not prevail against Konrad Adenauer with these ideas . From 1956 until his death, Arnold was CDU deputy federal chairman.

From 1925 to 1933 he was a member of the Düsseldorf city ​​council and deputy chairman of the center group there.

From 1946 until his death he was a member of the state parliament in North Rhine-Westphalia , from 1947 to 1949 also a member of the state council of the Bizone . In 1957 Arnold was elected to the Bundestag in the constituency of Geilenkirchen - Erkelenz - Jülich with a result of 72.6% , where he became deputy chairman of the CDU / CSU parliamentary group.

Karl Arnold (front left, next to Konrad Adenauer ) at the inauguration of the Gürzenich on October 2, 1955

On January 29, 1946, Arnold was appointed Lord Mayor of Düsseldorf and confirmed in the first free local elections on October 26, 1946. At the instigation of the British civil governor William Asbury , who, at Brian Robertson's instigation, sought the installation of a left-wing state government in order to better enforce the policy of nationalization of the coal and steel industry favored by the British Labor Party against the Ruhr industry, Adenauer and other more economically liberal-minded forces on the Ruhr question can, he was appointed Deputy Prime Minister of North Rhine-Westphalia in December 1946 when the Amelunxen II cabinet was formed . From June 1947 to February 1956 Arnold was Prime Minister of three coalition governments ( Cabinet Arnold I , II and III ). He led various coalitions from the CDU, Center Party, SPD (until 1950), FDP (since 1954) and KPD (until April 1948).

On September 7, 1949 (until September 6, 1950) he became the first President of the Federal Council and thus the first and provisional head of state of the Federal Republic of Germany until Theodor Heuss took office on September 13, 1949 . He was re-elected as Prime Minister after the state elections in 1950 and after the state elections in 1954 . Important political actions in this office include his contribution to the establishment of the West German Broadcasting Corporation , to coalition participation and the establishment of a state youth plan.

After dismissing Heinz Renner (KPD) from his government in April 1948, he also took over his post as Minister of Transport until the state election in 1950.

When Carl Spiecker died in office in November 1953, Arnold took over his previous department ( Minister for Federal Affairs ) for half a year.

On February 20, 1956, Arnold was overthrown by a constructive vote of no confidence by the SPD, FDP and the center; Fritz Steinhoff (SPD) became Prime Minister. For the state elections in 1958 , Arnold again ran as the top candidate of the CDU. He died of a heart attack at the age of 57 a week before the election.

Minister of the Interior of North Rhine-Westphalia

Transport Minister of the State of North Rhine-Westphalia

See also : Ministry of Transport of the State of North Rhine-Westphalia

Minister for Federal Affairs of the State of North Rhine-Westphalia

Chairwoman of the CDA