In the years after it was founded, the association grew only slowly at first, but soon acquired a further reputation, also due to its work in intellectual, religious and cultural areas. This differentiated him (even if not in his basic goals) from the CV, which in addition to the pursuit of spiritual and religious issues, above all also emphasized the maintenance of student customs.

During these years there was a first endurance test in the association. Controversy arose over the question of the Pope's infallibility . The Kulturkampf also put a heavy burden on the clubs and the association, from which they, however, emerged stronger. At the turn of the century, increased student recognition led to a steep increase in membership. However, this was also due to the massive increase in student numbers. When the First World War broke out , the KV consisted of 51 regular and three friendly clubs.

The association during the Weimar period

After the First World War there was an extraordinary surge in the number of students due to the return of the war veterans. The Catholic corporations also received a large influx of students. Numerous new associations were founded.

Until the end of the First World War, the association was limited to the territory of what was then the German Empire . Now further Austrian clubs have been added in Vienna and Graz.

An independent Philistine Committee was elected for the first time in 1921 , after this question had been discussed for decades. Since 1913, the cartel associations have been obliged to found a philistine association. The principle of the Lebensbund found its expression in the organizational form. From 1930 onwards, the number of members stagnated due to the global economic crisis.

In the political Weimar Republic , the KVer Wilhelm Marx should be emphasized, who with a total of 37 months in office as Reich Chancellor was the long- term representative in this function.

The time of National Socialism 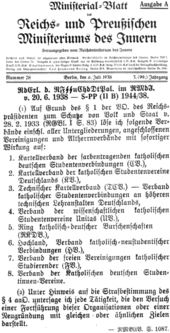 "What neither the Kulturkampf after 1879 nor the academic Kulturkampf around 1905 achieved, the National Socialist rulers succeeded in 1933" was the verdict of M. Luible in 1955, the former editor of the Academic Monthly Papers (AM), the association organ of the KV that has appeared since 1888. Misjudgment of totalitarian rule, misinformation and deliberate deception led the association and the whole country to doom. When the Catholic bishops gave up their resistance to the National Socialist "seizure of power" in March 1933, many KVers' will to resistance slackened. The conclusion of the Reich Concordat did the rest.

There was at times a great willingness, especially among the younger student members, to turn to National Socialism. In May 1933, the lawyer Karl Bachem reported on a weekend conference of the KV in Cologne: "The debate showed that there was also an overwhelming tendency in KV to immerse themselves in National Socialism. There seems to be no stopping it. From a whole series of associations it was reported that they have almost been closed or that most of them have been transferred to the SA. "

But even this willingness to self-align could not stop the forced demise of the KV. At the beginning of the National Socialist era, when the corporations were not yet banned, the rulers urged them to form larger associations. After corresponding discussions, an agreement was concluded on September 1, 1933 in Frankfurt am Main on the amalgamation of the Ring Katholischer Deutscher Burschenschaften (RKDB) and the KV. "Catholic fraternity" was set as the common name of all associations. This merger was not without criticism. From within it was criticized that a colored and a non-colored association had merged. Attacks came from outside, especially against the name, in particular from the Deutsche Burschenschaft (DB) . However, the merger did not last long. A short time later, numerous former RKDB connections tried to exit.

Because of the prevailing tension between Germany and Austria , there was also a break between the Austrian cartel associations and the association in 1933; After the founding of the ÖCV , the ÖKV was founded on July 24, 1933 , after the down-to-earth Austrian connections were prevented by the Reich German association management from working in the Austrian, patriotic sense. However, the hope was expressed that after the political contrasts had eased (meaning the end of National Socialism), a reunification of the associations could be brought about.

The Hitler's invasion of Austria put this project to a quick end. The “ Standstill Commissioner for Organizations, Associations and Associations ” ordered the ban on the ÖKV on June 20, 1938, but the final dissolution lasted until 1939. The association was re-established immediately after the war . Organization and objectives largely correspond to the KV, but there is also an emphatically Austrian basic concept. Today the ÖKV is linked to the KV through a friendship and work agreement and like this a member of the European Cartel Association .

The association was gradually rebuilt after the war from 1945. Many KVer served directly in political bodies in the newly emerging Federal Republic as Chancellor, Prime Minister and Minister. The most famous among them were Konrad Adenauer and Joseph Aloisius Ratzinger alias Benedikt XVI.

KVer also campaigned for the free democratic basic order in the Federal Constitutional Court , Gebhard Müller as President, Ernst-Wolfgang Böckenförde and Paul Kirchhof as judges in some trend-setting decisions.

After the 1968s, the cartel association reformed itself from the ground up. An essential innovation was the possibility for member corporations to accept non-Catholic Christians in special cases.

The wearing of colors in the form of ribbons and hats is controversial in the association. After some connections had been wearing ribbon for a long time at internal events and occasionally also external events, which was in contradiction to the statutes of the association, a regulation was passed in spring 2013 that no longer uncompromisingly prevents the wearing of color. This regulation was declared illegal in October 2015 and thus abolished again. The KV is therefore only colorful again.

The principles of the KV and its cartel associations are " religion , science and friendship ". The Austrian sister association Cartel Association of Catholic Non-Colored Academic Associations in Austria (ÖKV) adds the principle of Patria (Fatherland) to this.

In the sense of the principle of religion , the Kartellverband sees itself as a community of cartel members, based on the Catholic understanding of faith and originating from a Catholic faith initiative, who strive to live together by faith in Christ and to live according to this faith in various areas of society engage.

In accordance with the principle of science, the Kartellverband strives for an education of the cartel members that goes beyond specialist knowledge and is open to the diverse ideological positions, which is carried by the awareness of social obligations and connected with the effort to cope with tasks and functions that are important for society.

In accordance with the principle of friendship , the Kartellverband offers the cartel members the opportunity to achieve a donation to the other that goes beyond factual cooperation and thus to achieve a higher degree of understanding and tolerance for the convictions of those who think differently; this gives rise to a fraternal bond.

With the Georg von Hertling Medal, the Cartel Association of Catholic German Student Associations honors personalities who have made the Christian belief system effective to an outstanding degree through their scientific, political, literary or artistic life's work. The award is named after the historian and politician Georg von Hertling , who was instrumental in founding the KV.

The amalgamation of the CT connections in Heidelberg and Mannheim is known as the Rhein-Neckar cartel . It was closed due to its geographical proximity. One tries also to be able to exert stronger influence on the association policy of the KV. Members are Palatia Heidelberg, Ripuaria Heidelberg and Eckart Mannheim et Ludwigshafen.

The Heidelberger Ring was founded as part of the Heidelberg Castle Commander in 2009. Members are Cimbria Münster, Frankonia-Straßburg , Palatia Heidelberg and Winfridia Göttingen .

A list of well-known cartel brothers with their own Wikipedia entry can be found in the category: Corporated in KV .