The title of this article is ambiguous. For other people see Wilhelm Marx (disambiguation) . 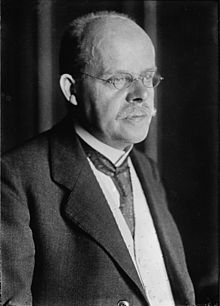 In the presidential election in 1925 he was a candidate of the parties of the Weimar coalition ( SPD , DDP and Zentrum) for the office of Reich President , but lost the election narrowly to Paul von Hindenburg . In the public sphere, Marx was always in the shadow of other people such as Gustav Stresemann or Friedrich Ebert . However, he was one of the key figures who ensured understanding within the democratic camp.

Marx was the son of an elementary school teacher. He grew up in Cologne and passed his Abitur at the Marcell High School there in 1881. Marx studied law at the University of Bonn . During his studies in Bonn he became a member of the K.St.V. Arminia in KV . In the summer semester of 1925 he was also made an honorary philistine at the K.St.V. Semnonia Berlin .

Marx passed the second state examination in law in 1888 and joined the Prussian administration of justice. For a short time he worked as a court assessor in Cologne and at the district court of Waldbröl (1889). Then he worked for several years at the mortgage and land registry office in Simmern . From 1894 Marx worked as a judge at the regional court in Elberfeld (now part of Wuppertal ). Ten years later he came back to Cologne as a district judge . His superiors viewed the political activities of the avowed Catholic in the Center Party with suspicion, but in 1906 the president of the Cologne Higher Regional Court approved his promotion. From 1907 to 1921, Marx was an appellate judge , albeit on the other side of the Rhine - at the newly established Düsseldorf Higher Regional Court .

He was politically active as a member of the Center and the Reich Banner . In the Weimar Republic he was a member of the Reichstag until 1932 and at times also held a government office. During the time of National Socialism he spent his retirement in seclusion. He lived in Bonn at Reuterstraße 115.

He had been married to Johanna Verkoyen since 1891, with whom he had four children. After his death he was buried in the Melaten cemetery in Cologne . 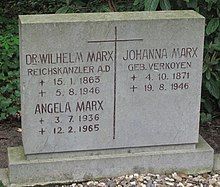 During the First World War , Marx stood up for the peace resolution and against excessive demands for annexation . After the collapse of the monarchy in 1919, he was elected to the Weimar National Assembly and the Prussian State Constitutional Assembly. During the occupation of the Rhineland by the Allies , in contrast to many other politicians from the region, he opposed the separation of the area from Prussia . Marx justified his support for the Versailles Treaty primarily with the fear that the Rhineland could be finally separated from Prussia without the treaty.

During the Weimar Republic , Marx initially endeavored to unite the center so that, in 1921, it would support the Wirth government - a " Weimar coalition " made up of the center, SPD and DDP under his party colleague Joseph Wirth . Their first official act was the recognition of a German reparation debt in the amount of 132 gold marks, which the right wing of the Center Party rejected as a " fulfillment policy ". Marx achieved this on the one hand through his political style, on the other hand through his appeal to Catholicism and the commitment of the entire party to the denominational school . From 1922 to 1928 he was the successor to Karl Trimborn as chairman of the Center Party.

After the fall of the Stresemann government in 1923, Marx accepted Friedrich Ebert's appointment as Reich Chancellor. He thus led the tenth German cabinet since 1919. Marx held the office of Chancellor twice. His first term of office lasted almost 13 months (November 30, 1923 to January 15, 1925), the second term of office 25 months (May 17, 1926 to June 29, 1928). During this time he headed four cabinets. The first three ( cabinet Marx I , Marx Cabinet II , Cabinet Marx III ) were cooking minority governments from the center , German Democratic party , Bavarian People's Party and German People's , the last ( Marx Cabinet IV ) was prepared by the German National People's complements. The foreign policy of this government, led by Gustav Stresemann, was supported by the Social Democrats .

Marx led the imperial government during some of its numerous crises. There were conflicts with the states of Saxony and Bavaria , and separatists were active in the occupied Rhineland and Palatinate. After the inflation of 1923, the introduction of the new currency also led to economic and financial problems. Marx reacted with austerity measures in the public budget, layoffs of staff and the introduction of new taxes. The development stabilized, at the end of February 1924 the military emergency was lifted.

Germany joined the League of Nations in Marx's second term . Marx deposed Colonel General Hans von Seeckt , who had developed the Reichswehr into a state within a state. However, Marx then fell over the Reichswehr. In the Reichstag, the Social Democrat Philipp Scheidemann revealed the cooperation between the Reichswehr and the Red Army .

Joint election rally by the Zentrum , SPD and DDP for their Reich President candidate Wilhelm Marx, April 17, 1925 in the Berlin Sports Palace

In the 1925 presidential election, Marx narrowly failed as a candidate for the Weimar coalition against Paul von Hindenburg . It was particularly painful for him that this was caused, among other things, by the support of the Bavarian People's Party and other Catholic groups for Hindenburg.

Marx was Prime Minister of Prussia from February 10 to March 18, 1925, and in 1926 served as Reich Minister of Justice under his successor Hans Luther . Until 1932 he was still a member of the Reichstag, while Marx spent the time of National Socialism in a secluded place in Bonn.

The President of Baden , the DDP politician Willy Hellpach , described him in the mid-twenties as an “ideal central politician”. In retrospect, the Westphalian SPD politician Carl Severing characterized Marx as a “man of the straight political center”.