This article deals with the politician Joseph Wirth. For other people see Josef Wirth . 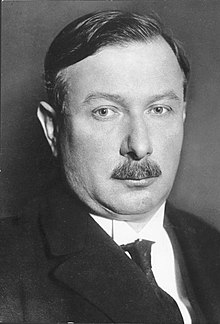 Wirth, who belongs to the left wing of the Catholic party, was insulted as a fulfillment politician because he was basically looking for cooperation with the victors of the First World War. However, in April 1922, out of annoyance about minor concessions from the West, he also accepted a treaty offer from Soviet Russia . The result was the Rapallo Treaty . In the early Federal Republic of Germany, Wirth took part in reunification initiatives and also held talks with politicians from the GDR and the Soviet Union .

Joseph Wirth was born in Freiburg in 1879 as the son of foreman Karl Wirth. His parents gave him and his two brothers a higher education. After graduating, he began studying social economics and mathematics at the Albert Ludwig University of Freiburg , where he received his doctorate in 1906 under Ludwig Stickelberger (on the elementary divisors of a linear homogeneous substitution) . In 1908 he found a job as a professor at the secondary school in his hometown. In 1909 he was one of the founders of the Vinzenzverein , a Catholic organization to help the socially disadvantaged. During this time Wirth joined the Center Party, for which he sat in the city council from 1912. A year later he moved into the Baden Estates Assembly . In 1914 he became a member of the Reichstag . After the outbreak of the First World War , Wirth volunteered . He was declared unfit for duty; then he reported to the Red Cross , for which he worked as a nurse on the Western Front until 1918 .

Joseph Wirth welcomed the November Revolution of 1918, although a year earlier he had identified with the truce policy of Reich Chancellor Theobald von Bethmann Hollweg . In 1918, Wirth became Minister of Finance for Baden. After Matthias Erzberger's resignation , Chancellor Hermann Müller appointed the Freiburg resident as his successor in the office of Minister of Finance . In the Fehrenbach cabinet , Joseph Wirth familiarized himself with the matter of reparation payments. After the resignation of Constantin Fehrenbach's government as a result of the London ultimatum , in which the Entente had demanded the acceptance of the reparation plan, Joseph Wirth rose to become Chancellor.

In May 1921, at the age of 41, the spokesman for the left center wing was sworn in as the youngest German chancellor to date. At first he continued to hold the office of Reich Finance Minister. His government was based on the so-called Weimar coalition of the parties of the center: SPD , Zentrum and DDP . The Wirth I cabinet soon decided to accept the London ultimatum in order to demonstrate that the demands could not be met in practice by fulfilling the demands . Wirth reckoned that the economic capacity of the empire would be completely exceeded, which is why the reparation payments would be revised anyway. Right-wing circles fiercely opposed the Reich Chancellor's policy of compliance . The attempt to meet the reparation demands increasingly overwhelmed the government, which was already heavily indebted by the reconstruction. The fact that more and more new loans were taken out drove the national debt up further. The Reichsbank responded by increasing pressure from banknotes and increasing money transfers to the government. The instability of the Weimar Republic after the fememicide of Karl Gareis , Matthias Erzberger and Walter Rathenau and the threat of the occupation of the Ruhr by the French to collect reparation payments in 1923 ultimately led to hyperinflation . The resulting impoverishment of the population helped to undermine trust in the republic and to strengthen the National Socialists.

After a 60% majority in the referendum in Upper Silesia on March 20, 1921, voted in favor of remaining within the existing borders, the League of Nations decided, in accordance with a possibility specifically provided for in the Versailles Treaty , to allocate the industrially important East Upper Silesia to Poland . The first Wirth cabinet resigned in protest against what the German government saw as a regulation that violated the peoples' right to self-determination .

Reich President Friedrich Ebert again commissioned Wirth to form a government. In October 1921, the Wirth II cabinet started work. The most decisive change in personnel took place in the field of foreign policy: Foreign Minister Friedrich Rosen was replaced by Walther Rathenau after Wirth himself held this office for a short time. In April 1922, a German delegation under Wirth and Rathenau took part in the World Economic Conference in Genoa for the first time on an equal footing . On April 16, at the initiative of Rathenau, the important Treaty of Rapallo was surprisingly concluded . In this, the Russian Socialist Federal Soviet Republic (later founding member of the Soviet Union) and the German Reich recognized each other under international law and waived reparation payments. For the German Reich this represented a partial regaining of sovereignty. However, this diplomatic success did not diminish the hatred of the right-wing extremists for the policy of compliance. After Rathenau's murder on June 24, 1922, Wirth stepped in front of the Reichstag and at the end of his very emotional speech, pointing to the right, shouted the words that are still known today:

“There stands the enemy who drips his poison into the wounds of a people. - There is the enemy - and there is no doubt about it: this enemy is on the right ! "

- Joseph Wirth : The Reich Chancellor on the occasion of the assassination of the Reich Foreign Minister Walther Rathenau . Speech in the German Reichstag, June 25, 1922

This appearance also impressed Harry Graf Kessler , who expressly revised his unfavorable earlier impression of a personal encounter: “After all, he had turned three fifths of the crowded house on its feet and against the right wing, who sat pale and silent as on a defendant's bench. [...] One feels that it really comes from the depths of his convictions: I have done the man an injustice; He's somebody. ”When Wirth gave a speech a few weeks later on July 11th for the adoption of the Republic Protection Act by the parties of the Reichstag, he also came up with an inflammatory article by the German national representative Henning , who was respected by everyone Rathenau had excited that the German honor had been lost since it fell into the hands of a Jew. Wirth described it as unheard of that such slander could be uttered and expressed his regret that the German National Party had not found the courage to part with such members.

When in November 1922 the attempt to bring all democratic forces from SPD to DVP together in a coalition failed, Reich Chancellor Joseph Wirth resigned.

In the years that followed, the former chancellor campaigned for the Reichsbanner Schwarz-Rot-Gold organization for the protection of the republic . In addition, he published the magazine German Republic , while he remained a member of parliament. In August 1925, the Center Party in the Luther I government entered into a coalition with the DNVP for the first time , which is why Wirth resigned from the parliamentary group in the Reichstag. Hermann Müller reactivated him for the office of Reich Minister for the Occupied Territories in the first grand coalition . In the Heinrich Brüning government, Wirth held the office of Minister of the Interior (1930/31), which had previously been held by Carl Severing (SPD). In that one year he acted as an intermediary between the Reich Chancellor and the SPD, with which the former Chancellor enjoyed great popularity.

In 1931, Joseph Wirth left the cabinet at the personal instigation of Reich President Paul von Hindenburg , who saw the Badener as being too left-wing.

In March 1933 the Enabling Act was up for debate in the Reichstag, which he rejected in a passionate speech. On March 24, 1933, following the adoption of the Enabling Act, which the center parliamentary group, including Wirth, agreed to due to the strict parliamentary obligation, the staunch opponent of the National Socialist ideology left the German Reich and emigrated to neutral Switzerland .

Wirth bought a villa in Lucerne and traveled through France and Great Britain to hold talks with leading statesmen . On a trip along the east coast of the USA , he gave lectures at Harvard University , where he met former Chancellor Brüning, who was in exile in America, and at Princeton to explain the methods of the Nazi regime. Wirth lived in Paris from 1935 to 1939 . Then he returned to Lucerne. Through personal connections to Rome, he sought a position from the Vatican directed against Germany's anti-Semitic policies . On his initiative went z. B. returned the memorandum The Church of Christ and the Jewish Question , which appeared in the Austrian magazine The Fulfillment in 1937 and called on all Christians, especially the Pope and the Roman Curia, to take a public position against the persecution of the Jews in Germany. He also maintained contacts with the resistance groups Solf and Kreisau . 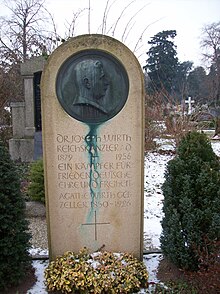 Joseph Wirth's grave in the main cemetery in Freiburg

In 1949 Joseph Wirth returned to his homeland after the French occupation authorities had prevented this to date. He rejected Konrad Adenauer's policy , as it cemented the division of Germany. Therefore, Wirth founded the neutralist " Bund der Deutschen " (BdD) and the Deutsche Volkszeitung together with Wilhelm Elfes . The former chancellor was an opponent of pure integration into the West and, in the tradition of Rapallo, believed in a compromise with the Soviet Union, although he did not approve of its policy. Wirth stayed in Moscow for the first time in 1951 for political talks . In the CDU, Wirth was considered a left outsider.

Because of his collaboration with communists and talks with representatives of the GDR, the Federal Republic refused to pay him a pension such as that received by Heinrich Brüning and Hans Luther . The CIA file The background of Joseph Wirth alleges that he was a Soviet agent. The GDR granted Wirth minor financial aid. In 1954, Wirth was awarded the GDR's German Peace Medal. In 1955 he received the Stalin Peace Prize .

In 1956 Joseph Wirth died of heart failure in his hometown of Freiburg .