The title of this article is ambiguous. Further meanings are listed under Gustav Bauer (disambiguation) . 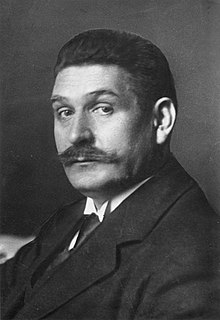 Gustav Bauer, son of a bailiff, whose ancestors had emigrated from southern Germany (probably with the Salzburg exiles ) to East Prussia in 1731/32 , worked after graduating from elementary school in Königsberg in 1884 as a clerk in a law firm. After a serious illness, one of his legs had to be amputated in 1888. From 1893 to December 1895 he was the office manager of the prominent defense attorney Fritz Friedmann . In 1895, Bauer founded the “Central Association of German Bureau Employees”, which he headed in 1908 until it merged with the “Association of Health Insurance Administrators”. After losing his job in 1902 because of union activities, he started his own business as an innkeeper , but gave up after just one year when he became the full-time head of the union's central workers' secretariat . From 1908 to 1918, Bauer held the office of second chairman of the General Commission of the German Trade Unions . In 1912 he was elected chairman of the supervisory board of the newly founded Volksfürsorge . In 1917 he was involved in the founding of the People's League for Freedom and Fatherland , which was supposed to counterbalance the extremist German Fatherland Party . After leaving politics, he was managing director of a Berlin housing association.

After the National Socialists came to power, he was imprisoned for several weeks in May 1933 on charges related to tax offenses. Presumably this was intrigue because no evidence could be presented. Then he no longer appeared.

Gustav Bauer was married to Hedwig Moch. His grave is in the cemetery of the parish Glienicke / Nordbahn .

Bauer was a member of the SPD, where he belonged to the right wing of the party that supported the truce policy with the imperial government during the First World War . In 1925 he was expelled from the SPD in connection with the Barmat scandal . The party arbitration tribunal lifted the exclusion on May 14, 1926. At the time of the Weimar Republic he belonged to the Reichsbanner Schwarz-Rot-Gold . 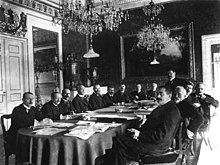 Reich Chancellor Max von Baden appointed him State Secretary of the Reich Labor Office in October 1918 . The Scheidemann cabinet belonged to Bauer since 13 February 1919 as Minister of Labor on. After Scheidemann's resignation on June 20, 1919, Bauer became Reich Chancellor of the government ( Bauer's cabinet ) the following day , which signed the Treaty of Versailles , although he himself rejected the terms of the treaty. After he had already spoken out in favor of accepting the treaty on June 22, but wanted to protest against individual provisions at the Entente (question of war guilt and extradition of German citizens), he had to admit at the meeting of the Weimar National Assembly one day later that his interventions were the victorious powers had shown no success. That he spoke out in favor of the signing of the contract was justified in front of parliament as follows:

Ladies and gentlemen! No more protest today, no storm of indignation. Let's sign, that is the proposal I have to make to you on behalf of the entire Cabinet. The reasons that compel us to make this proposal are the same as yesterday, except that we are now separated by just under four hours before the resumption of hostilities. We cannot answer for a new war, even if we had weapons. We are defenseless, but defenseless is not dishonorable. Certainly, the opponents want us to honor, there is no doubt about that, but that this attempt to cut off honor will one day fall back on the authors themselves, that it is not our honor that perishes in this world tragedy, that is my belief until last breath. (Source: Minutes of the 41st session of the Weimar National Assembly on June 23, 1919)

During his tenure, he pushed through the assignment of the railway system to the Reich's responsibility, as did the most extensive financial reform in German tax and financial history with Reich Finance Minister Matthias Erzberger . After the Kapp Putsch in 1920, Bauer had to resign because he, like the Reichswehr Minister in his cabinet, Gustav Noske , had lost the trust of his party and the trade unions ; but in the following government of his party friend Hermann Müller he held the office of treasury minister and from May 1, 1920 also the transport department, which he headed until June 25, 1920. In 1921 he belonged to the second Wirth cabinet as Vice Chancellor and Reich Treasury Minister .