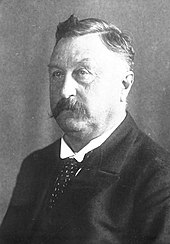 Constantin Fehrenbach's father, Johann Georg Fehrenbach, was a village school teacher. Constantin Fehrenbach's mother was called Rosina nee Gruseck. According to the Catholic worldview of his parents, he should become a priest. From 1865 he attended the Freiburg Knabenkonvikt ( Berthold-Gymnasium ), where he graduated from high school in 1871. He then began studying Catholic theology at the University of Freiburg . There he soon realized that celibacy was not the right way of life for him. Therefore, he broke off theology studies in 1874 and switched to the law faculty. During his studies he joined the KDStV Hercynia Freiburg in the CV , which gave him access to civic circles of dignitaries. In 1879 he passed the legal traineeship, in the same year he married Marie Hossner (1855–1921), daughter of a lawyer. The marriage resulted in a daughter. Fehrenbach was also a member of the KAV Suevia Berlin in the CV.

After legal clerkship and assessor exams, he settled as a lawyer in Freiburg in 1882 , where he mainly worked as a criminal defense lawyer . Soon he was socially established in the urban educated bourgeoisie and was politically active at the local level. In 1884 Fehrenbach entered the city council of Freiburg for the center. As chairman of the Münsterbauverein and 1st president of the Freiburg men's choir, he was firmly anchored in his homeland. From 1885 to 1887 he was a member of the Second Chamber of the Estates Assembly of the Grand Duchy of Baden . However, he resigned from parliament because of differences in ecclesiastical matters with his party. In 1901 he returned to the political arena of Baden state politics, where he represented the interests of his voters until 1913. His ability to act as a balancing act between the parties proved itself this time on the question of political Catholicism. In 1907 he was elected President of the Second Chamber in Baden with a large majority of the Center, the Conservatives and the Liberals and remained in this position until 1908. Only the SPD parliamentary group voted against him, which saw him as just another representative of the monarchical state .

Member of the Reichstag

Since the general election in 1903 Fehrenbach also belonged for the constituency Ettenheim Lahr the Reichstag as a center deputy. In 1909 he was an outspoken supporter of the new Chancellor, Theobald von Bethmann Hollweg . On December 3, 1913, Fehrenbach became famous throughout Germany with just one speech. In the course of the Zabern affair , which had been triggered by attacks in the Alsatian city of Zabern, he turned against the General Staff and made a highly regarded, impressive plea for a constitutional state and against the military as a state within the state . In his conviction, Fehrenbach received broad approval from the center, the SPD and the Progressive People's Party . While his criticism was also directed against Chancellor Bethmann Hollweg on this issue, Fehrenbach fully supported him in foreign and reform policy. During the World War, as chairman of the central main committee of the Reichstag, he was an important pillar of Bethmann's castle peace policy . In June 1918 Fehrenbach was elected President of the Reichstag . In the reforms to parliamentarize ( Easter message ) he saw the conversion of the empire to a parliamentary-democratic monarchy completed. The overthrow of the monarchy in November 1918 deeply shook the staunch supporter of a progressive, parliamentary empire. His attempt to convene the old Reichstag in order to preserve the monarchy failed because of the contradiction of the Council of People's Representatives . Nevertheless, the Weimar National Assembly recognized Fehrenbach as its President, as he, apart from questions of the form of government, had spoken out in favor of a democratic constitutional state. Eduard David had actually already been elected for this office , but he resigned after a protest by the center faction, which did not want to leave the three most important offices (Reich President, Reich Minister President and President of the National Assembly) all to the SPD. 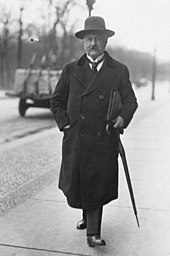 The Reichstag election in 1920 caused the collapse of the Weimar coalition , as the SPD lost considerable votes to its left-wing rival USPD . In this way a bourgeois minority cabinet consisting of the center, DDP and DVP came into being, which relied on the support of the SPD for every central issue. A man of compromise was sought for this coalition, and he was found in the 68-year-old President of Parliament Constantin Fehrenbach. Fehrenbach hesitated to accept the offer.

The most important task of his chancellorship was the fulfillment of the Versailles Treaty . However, this only laid the framework for several conferences that dealt with the question of reparations. At the Spa conference from July 5 to 16, 1920, in which representatives of Germany were allowed to take part for the first time, Reich Chancellor Fehrenbach led the German delegation. In his address to the representatives of the Entente, he demanded that the German Reich be allowed at least double that amount instead of the reduction in army strength to 100,000 men provided for in the Versailles Treaty. The referendums that took place at the same time on the whereabouts of the East and West Prussian voting areas of Allenstein and Marienwerder in Germany and that in Upper Silesia on the same question resulted in a large majority in favor of maintaining the area situation.

At the conferences in Paris and London in early 1921, the total amount and modalities of reparation payments were discussed. Fehrenbach and his Foreign Minister Walter Simons protested against the policies of the victorious powers, to which they reacted by occupying bridgeheads on the right bank of the Rhine. Nevertheless, Fehrenbach and the German delegation succeeded in reducing the amount of reparation payments compared to that provided for in the Versailles Treaty. In order to force Germany to accept the reparation demands, the Entente issued the London ultimatum . When it came to the question of accepting the ultimatum, the contradictions within the coalition of the political center became clear for the first time. Fehrenbach did not succeed in bridging this and therefore resigned with his cabinet on May 4, 1921 after almost a year as Chancellor. 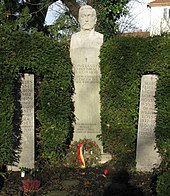 Fehrenbach's grave in the Freiburg main cemetery with a wreath of Hercynia Freiburg .

After his resignation as Chancellor, Constantin Fehrenbach remained politically active. Shocked by the murder of Foreign Minister Walther Rathenau , he took over the deputy chairmanship of the Association for Defense against Anti-Semitism in 1923 . As a reaction to the Fememicide , the staunch democrat supported the establishment of the Reichsbanner Schwarz-Rot-Gold in 1924. Fehrenbach retained the chairmanship of the central parliamentary group in the Reichstag until his death.

Constantin Fehrenbach died on March 26, 1926 in Freiburg at the age of 74. As an honorary citizen of the city of Freiburg im Breisgau, Fehrenbach was buried in a grave of honor in the Freiburg main cemetery, which is adorned with a portrait bust of Emil Stadelhofer . 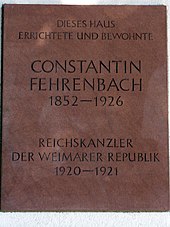 Memorial plaque on the house where he was born in Wellendingen

His estate is in the General State Archives in Karlsruhe . Fehrenbach's daughter married Wilhelm Rosset. Their son Clemens Rosset (1911–2008) was also a lawyer and namesake of the Freiburg law firm Rosset, Merz & Partner. The office is located in Fehrenbach's listed Freiburg residential building Schwarzwaldstrasse 1 , where Fehrenbach's father-in-law, Felix Hossner, had already worked as a lawyer and Fehrenbach also had his legal practice. A memorial plaque was attached to this house in 2013. 47.990624 7.854865

Another memorial plaque can be found in his birthplace Wellendingen, which today belongs to Bonndorf in the Black Forest . On this panel is his first name, as well as on the sign for there named after him street, falsely with K written.

In Freiburg im Breisgau, Fehrenbachallee is named after Constantin Fehrenbach.

President of the Reichstag of the German Empire