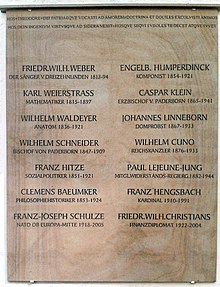 Wilhelm Cuno is named on the roll of honor of former students of the Theodorianum high school in Paderborn. (Right side, fourth from top)

Carl Josef Wilhelm Cuno (born July 2, 1876 in Suhl , † January 3, 1933 in Aumühle ) was a German businessman and non-party politician. He was German Chancellor from November 22, 1922 to August 12, 1923 . Cuno represented conservative and economically liberal views. He was director of HAPAG and represented at numerous conferences and committees as a business representative.

Cuno was the eldest son of the administrative officer August Cuno in Suhl ( Prussian province of Saxony , today Thuringia ). His father's occupation required frequent moves, which is why Wilhelm attended grammar schools in Königsberg , Berlin and Venlo before graduating from high school at the ancient-language humanistic Theodorianum in Paderborn in 1897. He studied at the universities of Berlin and Heidelberg law . During this time he joined the student associations KAV Suevia Berlin and KDStV Arminia Heidelberg . He was also a member of the connections KDStV Winfridia (Breslau) Münster , VKDSt Rhenania Marburg and KDStV Wiking Hamburg , all in the CV . In 1900 Cuno received his doctorate from the University of Wroclaw .

He then gained experience in various regional courts. In 1906 he married the Hamburg merchant's daughter Martha Wirtz (* 1879). A year later he entered the civil service career as a government assessor. As a civil servant in the Reich Treasury under Hermann von Stengel , Cuno drafted bills that he represented in committees of the Reichstag . During the First World War he was released from the front line , meanwhile promoted to the secret government council. Instead, he was in charge of the Reichs Grain Office until July 1916 , after which he was briefly department head in the War Food Office and, from late 1916, head of the General Department for War Economics. One of his main fields of work there was the law on the restoration of the German merchant fleet , through which he made the acquaintance of the general director of HAPAG , Albert Ballin . Ballin appointed him to the HAPAG board of directors. On November 9, 1918, Ballin, a close confidante of Kaiser Wilhelm II , committed suicide out of desperation over the November Revolution . Wilhelm Cuno succeeded Ballins as General Director of HAPAG on December 20, 1918.

The entire German shipping industry was in a difficult position after the end of the world war because many of their ships had been damaged. In addition, the Entente powers decided at the Paris Peace Conference in 1919 , where Cuno worked as an economic expert, to expropriate the German merchant fleet as a reparation payment . A year later, Cuno signed a cooperation agreement with United American Lines , which enabled HAPAG to rise again.

During this time, the bourgeois parties approached the conservative business leader, who finally decided to join the German People's Party . When, in his opinion, the latter took an ambiguous position in the Kapp Putsch , he left the DVP and remained independent from that point on. Chancellor Constantin Fehrenbach offered him the finance department in 1920, which Cuno refused, as did the external department in 1921. However, he attended the Genoa Conference as an expert . From its founding in June 1922 until his appointment as Chancellor, Cuno was President of the Übersee-Club in Hamburg, which promoted free trade .

After the resignation of Chancellor Joseph Wirth on November 14, 1922, Cuno formed a “cabinet of the economy” that was assigned to the political center and was supported by a parliamentary minority made up of the Center Party , the German Democratic Party, the German People's Party and the Bavarian People's Party . On November 22, 1922 he was appointed Chancellor by President Friedrich Ebert . This step took place without parliamentary consultation or election, which is why he is considered the first presidential chancellor. With this step, Ebert wanted to achieve several goals: The party independence of Cuno should smooth the political waves and at the same time overcome the financial crisis of the empire. In addition, the new chancellor had influential contacts in the USA , which should facilitate the solution of the reparations question.

His attempt to fight the Belgian-French occupation of the Ruhr area in January 1923 , which was supposed to serve to collect reparation claims, through passive resistance, failed because the state budget was overwhelmed by the compensation payments for the Ruhr occupation . In addition, inflation reached unprecedented levels. The Cuno strikes in August 1923 led to massive protests against the government. Because the majority in the Reichstag demanded a new cabinet, he resigned with his minority cabinet on August 12, 1923 after nine months in office as Reich Chancellor.

Funeral procession for Wilhelm Cuno at the Ohlsdorf cemetery in Hamburg 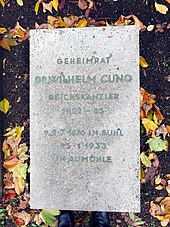 After his resignation, Cuno was a member of the HAPAG supervisory board. In 1925 he was traded as a candidate for the presidential election . Since he himself supported Paul von Hindenburg's candidacy , there was no list for election. In 1927 he took over the management of HAPAG again. In the same year he founded Germany's first Rotary Club in Hamburg and was elected its first chairman. In 1930 Cuno played a key role in the negotiations for the release of German assets in the USA. For his company he reached a union contract with the second largest German shipping company , North German Lloyd .

Attempts by the DVP to induce him to re-enter failed. In 1932 he helped found the Keppler Circle , which advised the NSDAP on economic issues. However , Cuno refused to sign a call by leading German industrialists to Reich President Hindenburg to appoint Adolf Hitler as Reich Chancellor. He saw the solution to the parliamentary crisis in a non-partisan government.

Wilhelm Cuno died at the age of 56 as a result of a heart attack.

Wilhelm Cuno was buried in the Ohlsdorf cemetery in Hamburg, grid square Z 16 (east of Nordteich , north of Waldstrasse ).