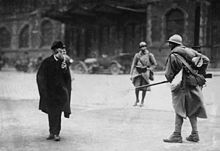 The occupation of the Ruhr (also Ruhr crisis , Ruhr invasion or Ruhr invasion called) the occupation referred to the hitherto unoccupied parts of the Ruhr by occupation forces in France and Belgium from early 1923 to 1925. The crisis in the period of the Weimar Republic marks the culmination of the political-military conflict around the Fulfillment of the Allied reparation demands after the First World War between the German Reich and the victorious powers, especially France. In the nationalist context, the occupation of the Ruhr and the partly civil, partly militant German resistance against the occupiers were often referred to as the “Ruhrkampf”. The course and outcome of the Ruhr crisis were of far-reaching importance for international relations with and between the victorious powers as well as for domestic political developments in Germany.

The Weimar Republic was obliged by the Versailles Treaty of 1919 to make reparations to the victorious powers of the First World War . Especially the French Prime Minister Poincaré , who was also acting Foreign Minister, insisted on the uncompromising fulfillment of the provisions of the Versailles Treaty in the interests of France's economic and security policy. Due to delays in deliveries, French troops repeatedly advanced into unoccupied territory. On March 8, 1921, French and Belgian troops occupied the cities of Duisburg and Düsseldorf in the zone of the Rhineland which had been demilitarized according to the peace treaty . France thus created the basis for a possible occupation of the entire Rhenish-Westphalian industrial area . In addition, the control of the Duisburg-Ruhrorter ports enabled the exact registration of the entire export of coal, steel and finished products from the Ruhr area . The London ultimatum of May 5, 1921, with which the victorious Allied powers wanted to enforce their payment plan for the German reparations amounting to 132 billion gold marks against Germany, was combined with the threat that if Germany refused to occupy the Ruhr area.

Because of the worsening economic problems of the German Reich, the Allies waived reparation payments in the form of money in 1922 and instead demanded benefits in kind (steel, wood, coal). On December 26, the Allied Reparations Commission then unanimously determined that Germany was behind with the reparations deliveries. When the Reparations Commission declared on January 9, 1923 that the Weimar Republic was deliberately withholding deliveries (among other things, only 11.7 million instead of the required 13.8 million tons of coal and only 65,000 instead of 200,000 telegraph poles had been delivered in 1922 ), France adopted this Reason to invade the Ruhr area. 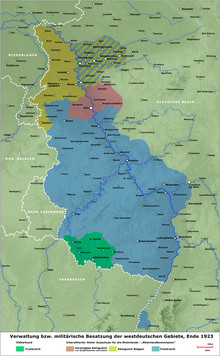 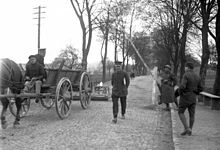 Entry of French troops into Essen, 1923

Between January 11 and 16, 1923, under the command of French General Jean-Marie Degoutte, French and Belgian troops initially 60,000 and later 100,000 men occupied the entire Ruhr area as far as Dortmund . In spring and summer of the same year, parts of the Bergisch industrial area were temporarily occupied by French associations, namely Remscheid and Lennep (March 1923 to October 1924) and, for a short time, Barmen (July 1923), while Elberfeld remained unoccupied and Solingen had been British since 1919 occupied bridgehead area around Cologne.

The aim of the occupation was to secure the coal and coke production there as a "productive deposit" to meet the German reparation obligations. According to the author Castillon, Germany destroyed half of the French coal production capacity during the war - this statement is not shared by other authors. It is not entirely clear whether the French Prime Minister Poincaré was also interested in more than the provision of reparations. According to some authors, he was aiming for a special status for the Rhineland and the Ruhr area, comparable to the status of the Saar area, in which membership of the German Empire would only have been formal and instead France would have taken a decisive position. The United Kingdom classified the occupation of the Ruhr as illegal.

Demonstration against the occupation of the Ruhr on Berlin's Königsplatz on March 25, 1923

Double portrait of the Belgian royal couple Albert & Elisabeth in 1924 on the front of a military medal at the end of the occupation of the Ruhr.

The occupation sparked an outcry in the Weimar Republic. The Reich government under the independent Chancellor Wilhelm Cuno called on the population on January 13, 1923 to "passive resistance". No more reparations were paid to France or Belgium, industry, administration and transport were in some cases paralyzed with general strikes . Companies and authorities sometimes did not obey the occupiers' orders. The officials and workers of the Deutsche Reichsbahn refused to work and left their posts, often taking all official documents and information with them. In many train stations and signal boxes, the lettering was dismantled, locomotives and wagons were driven to unoccupied areas. The occupation forces have responded by taking over the operation in the run utility through the so-called Régie des Chemins de fer des Territoires occupés . This required the use of French and Belgian railway workers to a considerable extent. Due to the lack of technical documentation and the fact that the Reichsbahn's vehicle and safety technology deviated significantly from French and Belgian standards, this initially led to considerable problems due to accidents and a significantly reduced performance of the railway network.

The occupation troops reacted to the passive resistance by imposing 150,000 sentences, which, in addition to imprisonment, meant expulsion from the occupied territory, especially for railway workers. In the meantime, former volunteer corps members and communists have committed acts of sabotage and attacks against the occupation forces. In the KPD in particular, however, this tactic was controversial. The Comintern expert on Germany, Karl Radek, condemned the saboteurs' right-wing sentiments, but praised their radicalism, while others rejected any verbal association with the Ruhr War as nationalistic. In contrast, sabotage was celebrated on the political right. Among other things, the Emscher passage of the Rhine-Herne Canal near Henrichenburg was destroyed by a blast. The occupying power, in turn, responded with expiatory measures, the situation escalated and resulted in 137 deaths. Albert Leo Schlageter was sentenced to death and executed as a deterrent for espionage and sabotage, which made him a martyr in the German public .

In addition to the economic damage caused by passive resistance, they also wanted to exert linguistic pressure. For example, loanwords commonly used in German should be replaced by German terms, for example casino by factory inn , telephone by telephone , sidewalk by sidewalk or automatically by automatically .

End of the Ruhr struggle

Burial of the victims

During the passive resistance , the wages of around two million workers in the Ruhr area were taken over by the state, for which purpose the government under Chancellor Cuno had more money printed. This approach could not be maintained for a long time, as the economic crisis intensified and hyperinflation as well as production and tax losses put a strain on the German budget .

On September 26, 1923, the new Chancellor Gustav Stresemann was finally forced to announce the end of passive resistance. Anti-republican, reactionary forces in Bavaria provided the end of the Ruhr struggle with a pretext for the establishment of a dictatorship . The total economic damage caused by the occupation of the Ruhr was put at around four to five billion gold marks. The end of the Ruhrkampf made a currency reform possible , which was a condition for renegotiating the reparations. This finally ended an inflation phase that had begun in 1914.

End of the occupation of the Ruhr

Under pressure from the USA and Great Britain , France gave way in 1923/1924 by concluding the MICUM Agreement . The occupation of the Ruhr area ended in July / August 1925 in accordance with the Dawes Plan passed in 1924 .

A list of monuments and memorial plaques in the Ruhr area / Rheinisch-Westphalian industrial area:

An impressive memorial for the workers who were shot by the French military at the Krupp factory on Holy Saturday 1923 stood in the Essen Cemetery of Honor.