The defeat in the Battle of Sedan in the Franco-Prussian War of 1870/71 and the ensuing capture of Emperor Napoléon III. led to the proclamation of a “temporary” republic in Paris on September 4, 1870 . After the defeat of the Paris Commune , the re-establishment of a constitutional monarchy was planned. Ultimately, the Legitimists and Orléanists agreed to propose the succession to the throne to Henri d'Artois , Count of Chambord. However, the latter refused to commit to the still-to-be-created constitution and the tricolor . The Assemblée Nationale (National Assembly) took a good four years to pass constitutional laws (see section 'Institutions' ).

The constitution created a legislature with a two-chamber parliament ( Chamber of Deputies and Senate ), which together elected a president with a strong position vis-à-vis the government for a seven-year term as the national assembly . The position of the president was not quite as strong as it was later in the Gaullist conception for the Fifth Republic . The Prime Minister was dependent on the majority in the Chamber of Deputies; the cabinets changed quite frequently.

In terms of foreign policy, the new state initially had a difficult time. Until 1890, the Chancellor of the German Empire , Otto von Bismarck , ensured an isolation of foreign policy with his alliance policy for France, which was the only major republic in Europe to have to reckon with the mistrust of the monarchical powers.

Because Alsace-Lorraine fell to Germany after the Franco-Prussian War, the border between Germany and France was now more western than before. In 1874, the French began building the Barrière de fer ("Iron Barrier"), which consisted of numerous forts , forts and other defensive structures. Revanchism was widespread in the Third Republic ; many politicians were ready to make financial and military efforts to recapture Alsace-Lorraine .

Domestically, the state struggled particularly to push back the influence of the Catholic Church (for details see Roman Catholic Church in France # 19th century ). This led to rigorous secularism  - which is still part of the French self-image today - and to the expansion of the state school system . In 1905, as a consequence of the Dreyfus affair, the law separating church and state was adopted. It stipulates a strong separation of church and state (French la laïcité , secularism).

Its military alliance with Russia led France into the First World War in August 1914 . France pursued as allied power in the Triple Entente , among others, the goal , to the "shame of 1870-71" return the favor . There was political consensus among all parties that Alsace and Lorraine should come back to France. Shortly after the Second International broke up, the bourgeoisie and the socialist SFIO met in the Union sacrée at the end of August 1914 .

German troops occupied a considerable part of the economically important north-east of France until the Battle of the Marne . Considerable destruction was the result and numerous residents fled. The government (under President Raymond Poincaré ) moved its seat to Bordeaux from the beginning of September to December 1914 .

During the course of the war on the Western Front , the French army suffered considerable losses in several unsuccessful attempts to break through the German front. The loss-making defense of Verdun in 1916 became a symbol. In the spring of 1917, after another unsuccessful offensive on the Aisne , mutinies broke out across the board . On April 6, 1917 , the United States entered the war . In November 1917, Georges Clemenceau was elected Prime Minister. In November 1918, the Compiègne Armistice (1918) ended the war. Of the nearly 8.1 million French military service, between 1.3 and 1.5 million (16 to 18.5 percent) had died.

France, as the victorious power, dictated harsh peace conditions to the defeated Central Powers in the Paris treaties . Alsace-Lorraine came back to France. Economically, France was one of the big losers as it suffered massive devastation and went into debt.

In the election to the Chamber of Deputies in November 1919, the Clemenceau cabinet lost its majority. A “ national bloc ” ( Bloc national ) , united in its policy of harshness towards Germany, formed the government and ruled until 1924. Important foreign policy issues were the German reparation payments and the establishment of a cordon sanitaire between Germany and Soviet Russia . In the course of his policy of "security on the Rhine", Prime Minister Poincaré operated the occupation of the Ruhr in 1923 , which ultimately led to a de facto political defeat with the Dawes Plan .

After the elections won by an alliance of left parties ( Cartel des gauches ) in May 1924, the Herriot I cabinet came to power under Édouard Herriot . In October 1925, negotiations in Locarno led to Franco-German rapprochement (see Locarno Treaties ). Aristide Briand took part for France (he was Foreign Minister in 14 successive governments from 1925 to 1929), and Gustav Stresemann for Germany . From 1924 onwards, the creeping inflation of the franc was perceived as crisis-ridden, due to the financing of the war between 1914 and 1918. The Herriot government failed because of the stabilization of the currency, which was only achieved in 1926 by the conservative Poincarés government, who, as prime minister and finance minister, implemented a tough austerity policy in one person .

The following years were crisis years with rapidly changing governments. From 1931 onwards, France suffered from the global economic crisis , which was less pronounced in France than in Germany, for example, but lasted longer. On February 6, 1934, the fascist Croix de Feu movement took part in an anti-parliamentary street battle , after which Édouard Daladier resigned.

Gaston Doumergue , president from 1924 to 1931, formed a "government of national unity" (French: Union Nationale ) that had to get along without the consent of the communists and socialists. In the spring of 1936 the parliamentary elections were won by the newly formed front populaire made up of socialists, communists and radical socialists with the slogan “bread, peace, freedom”. The socialist Léon Blum became Prime Minister from June 1936 to June 1937 and in March / April 1938. The first time he was succeeded by Camille Chautemps , the second time by Édouard Daladier (April 10, 1938 - March 21, 1940). The Popular Front consistently pursued the principle of non-interference in the Spanish Civil War and of "collective security". She practiced a policy of appeasement towards the Nazi regime .

The German Reich began the attack on Poland on the morning of September 1, 1939 ; France responded with Great Britain on September 3 with the declaration of war .

At the beginning of the Second World War, France was relatively unprepared militarily: its strategy had previously assumed that it would stop a German attack with the Maginot Line and then, with the help of the allies in the east, involve the German Reich in a two-front war. Now Czechoslovakia was no longer available as an ally, and Poland needed help itself. This would have required an offensive orientation of the armed forces, for which the tank officer Charles de Gaulle had promoted since 1934. In vain, France stuck to its defensive strategy and was therefore militarily unable to come to the aid of its allies with an offensive thrust across the Rhine.

The French army therefore remained on the defensive (" Sitzkrieg ") until the German occupation of Belgium on May 10, 1940 and overestimated the Maginot Line, a defensive system built from around 1930, consisting of a line of fortifications . 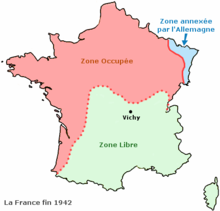 Occupied France and the Vichy regime

On May 10, 1940, the Wehrmacht began the western campaign with an attack on the neutral states of the Netherlands , Belgium and Luxembourg . The Netherlands surrendered on May 14; Belgium on May 28th. Parts of the French army and the British Expeditionary Force (BEF) advanced in Belgium. They were surprised by the sickle cut plan of the Germans; the BEF was encircled in Dunkirk and was largely rescued (but only with most of the equipment left behind) in Operation Dynamo . On June 5, the Wehrmacht began the final offensive in the course of the attack on France ; French resistance quickly subsided. On June 14, 1940, German troops occupied Paris; the French troops had withdrawn beforehand and Paris was an open city . The French army was in complete defeat. After the resignation of Prime Minister Paul Reynaud , President Albert Lebrun commissioned Marshal Pétain on June 16, 1940 to form a government and to negotiate the armistice. Hitler could dictate the conditions to the vanquished; the Compiègne armistice (June 22, 1940) was a de facto capitulation to the German Reich.

About six tenths of France (zone occupée) came under German occupation (see map). Philippe Pétain founded the État français (French for French state ) on July 11, 1940 in Vichy . The day before the National Assembly in Vichy had authorized him to do so. This ended the Third Republic.

The legislature was divided into two chambers together a parliament (National Assembly) formed (see bicameral ) . The Chambre des Députés (with more than 600 MPs) was elected by universal suffrage. The Senate (300 senators, elected for nine years) was re-elected in one third every three years. The members of the Senate were elected by the electoral committees (collèges électoraux) of the departments or the village communities.

The head of the executive was the president elected for seven years by the Assemblée Nationale (Président de la République). He had no liability of his own and all of his activities had to be certified by a minister. His only power was to decide who should form a new cabinet. The government was accountable to the House of Representatives and the Senate.

President of the III. republic

Crises in the III. republic

Coin from the time of the Third Republic (1936). The wreath of ears and the cornucopia are said to convey wealth and abundance.

The III. The republic was marked by a series of conflicts, crises and scandals. A coup d'état by General Boulanger seemed threatened in 1889 , and he later shot himself. In the same year, the Panama scandal shook the republic and in the 1890s the Dreyfus affair led first to the brink of war with Germany and then to the brink of a civil war between nationalists - a revision of the high treason against Alfred Dreyfus as an attack on the French Looked at Army - and Republicans. As a consequence of the Dreyfus affair, the law on the separation of church and state was adopted in 1905 , whereby the complete separation of state and church - French la laïcité , English secularity - was anchored in the French constitution . In the Faschoda crisis of 1898, the colonial claims of France and Great Britain collided; a military conflict between the two states in Africa (and subsequently possibly in Europe) could be feared.

This was followed by the Moroccan crises ( 1905/06 and 1911 ), the First World War , the Great Depression (from 1929), the internal conflicts in connection with the Popular Front government in the 1930s and the end of the Republic in World War II .

In terms of the number of its governments, France was far more unstable than Germany or Great Britain. From the end of the First World War to the end of the Third Republic in 1940 there were twenty-seven French cabinets, fourteen in Germany and seven in England.