The following outstanding examples with historical significance are sorted by age: 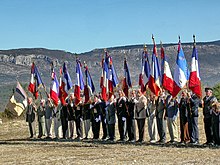 Resistance veterans with the French tricolor