Wilhelm I of Orange-Nassau, Adriaen Thomasz Key, (around 1575)

The coat of arms of Wilhelm I.

Bust in the Walhalla by the sculptor CF Tieck (1815) 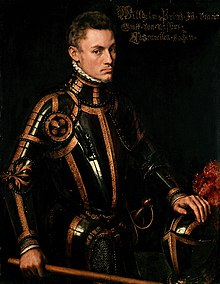 Wilhelm was born in 1533 in Dillenburg , the capital of the County of Nassau-Dillenburg , as the son of Wilhelm von Nassau and Juliana zu Stolberg . His cousin, Renatus (René) of Nassau , Prince of Orange, died on July 18, 1544 during a campaign in Champagne . Even before the battle, René had appointed his cousin Wilhelm von Nassau-Dillenburg as heir because he had no male offspring. Emperor Charles V made his consent to the succession dependent on the condition that Wilhelm would be brought up Catholic at the imperial court.

With his inheritance, the Principality of Orange, as well as possessions that made up almost a quarter of Brabant , Franche-Comté , Dauphiné and the County of Charolais , Wilhelm became one of the wealthiest Dutch aristocrats. Wilhelm owned one of the most beautiful castles north of the Alps in Breda , and the Nassauer Hof in Brussels was famous far beyond the country's borders. Despite his extensive Dutch possessions and the honorary title "Father of the Fatherland", William of Orange did not speak the Dutch language perfectly. His mother tongue was German and of course French, the language of the aristocracy, he also mastered.

Role in the eighty years war 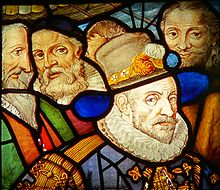 Wilhelm I of Orange-Nassau in the stained glass window No. 25 in the Sint Janskerk in Gouda "The Liberation of Suffering"

At the imperial court in Brussels , Wilhelm grew up to be one of Charles V's closest confidants. If the Kaiser received ambassadors from abroad, Wilhelm alone had the privilege to remain present. When Charles V transferred control of the Netherlands to his son Philip on October 25, 1555 , he leaned on Wilhelm's shoulder when he moved into the throne room, a gesture with a symbolic character. After Charles abdicated as emperor in 1556, Wilhelm was given the task of bringing the imperial regalia to Frankfurt .

This recognition stemmed from Wilhelm's successes in Charles's fifth war against France. The young Orange was appointed commander-in-chief of the Meuse army and won several significant victories. In the course of this he was accepted into the Order of the Knights of the Golden Fleece , an elite group of high-ranking nobles who were particularly close to the regent. During this time, Wilhelm's personal aversion to Philip II was already evident, but he placed his duties towards the liege lord above personal feelings.

In 1559, under Charles' son Philip II of Spain , Wilhelm became governor of the king in the counties of Holland , Zeeland and Utrecht , while Philip also appointed his half-sister Margarethe of Parma as governor of the other Dutch provinces.
As governor, Wilhelm was in command of the troops in the above-mentioned provinces and was responsible for maintaining order and for protecting royal property and the church's position. He was also able to convene the provincial estates and influence the selection of city officials. He had to report regularly on his actions to the court in Brussels, but was also able to provide advice there.

After the early death of his first wife in 1558, Wilhelm married Anna von Sachsen (1544–1577) in 1561 , the daughter of Elector Moritz von Sachsen from a Protestant family that was hostile to the Habsburgs. With this marriage he wanted to secure the support of the Protestant princes. This showed for the first time Wilhelm's diplomatic skill, which he is often interpreted as opportunism: he testified to Philip II that Anna was ready to convert to Catholicism, while he assured his future in-laws before the wedding that he would be secretly a Protestant. The marriage had six children, four of whom reached adulthood.

William of Orange's multiple changes of denomination and different manifestations of faith can be seen differentiated. He saw himself as a pious and devout Christian, but the split in Christianity caused by increasing denominationalization was a thorn in his side. In his view, everyone was free to follow any belief. He put peace and tolerance above dogmatic disputes. His clear goal was a feudal corporate state, but in the meantime he joined forces with the Calvinist bourgeoisie as the only partner.

More recent work has also shown that the differences between denominations in the middle of the 16th century were not perceived by many contemporaries as being as sharp as they might later appear.

It should also be mentioned that Wilhelm saw his resistance initially as a service to his ruler and later at least to his fatherland. Even during the period of horror of the Duke of Alba and his “blood court”, Wilhelm clung to Philip II and accused his advisers and his subordinates, but not the king himself. So he wrote together after the arrival of Cardinal Granvelle in the Netherlands the Count Egmont and Hoorn a letter to Philip, in which they demanded the deposition of Granvelles. Otherwise, they would resign from the State Council. This threat from the leading Dutch princes had great weight at the time, so that Granvelle was forced to resign a short time later and the three counts resumed their service.

In 1566 the Beeldenstorm ( iconoclasm ) took place, in which churches in both Flanders and the northern provinces of the Netherlands were stormed by Protestants and all the holy figures they found and considered blasphemous were destroyed. This action was justified with the second commandment : "You should not make any image or any parable of God in order to worship him". It was the external reason for the beginning of the Eighty Years War with Spain two years later.

To put down the rebellion, Philip II sent an army under the Duke of Alba to the Netherlands in 1567 , who immediately set up a regiment of terror and persecuted the Protestants relentlessly. Wilhelm therefore did not want to take the king's side. Since he had to fear for his safety because of this decision, he fled back to Dillenburg, taking with him everything that could be turned into money. He left his son from his first marriage, Philipp Wilhelm , at the University of Leuven because he seemed to be protected by the university privileges there. But Philipp Wilhelm was later kidnapped by Duke Alba as a hostage to Spain and never saw his father again. Wilhelm's friends and co-leaders of the opposition, the Counts of Egmont and Hoorn , stayed in the country. Both were invited by Alba for talks, but were captured and beheaded after their arrival. However, this did not weaken the revolt, but only reinforced the already existing revolutionary spirit of the Dutch people. The property of the Orange, whom the blood councilor accused of high treason , just as he had done with Egmont and Hoorn, was confiscated in early 1568; including the castle in Breda , which he inherited in 1544 and was his residence for a few years. With this, Wilhelm had - temporarily - lost the headquarters of the House of Orange-Nassau in the Netherlands.

After William of Orange had received a Dutch embassy in Dillenburg Castle on April 14, 1568, he gathered troops to fight against Alba in April 1568 in the Battle of Dahlen . In 1568 his brother Adolf (* 1540) died while attempting another invasion in the far north of the country in the battle of Heiligerlee . Wilhelm, who was insolvent, looked in vain for help from the German Lutherans . Elizabeth I of England also refused to help him. The French Huguenots promised support, but were no longer able to do so after Bartholomew's Night (1572), when 8,000 Huguenots were murdered at the instigation of the French king.

On April 1, 1572, a group of nobles called the Geuzen (beggars) took over the town of Den Briel, now Brielle , and declared themselves “princes”. The name Geuzen was supposed to look derogatory at the time, but the insurgents soon made it their propaganda tool. The uprising soon spread across large parts of Holland and Zeeland.

In 1572 Wilhelm himself set out from Ginsburg near Hilchenbach with an army that had been raised in the Nassau ancestral lands via Freudenberg to liberate the Netherlands. In the same year Wilhelm moved his residence to Delft, since Breda was still in the hands of the Spaniards. Delft, on the other hand, had sided with the rebels and, as a fortified city, seemed to offer enough security that the Orange's family also came here. 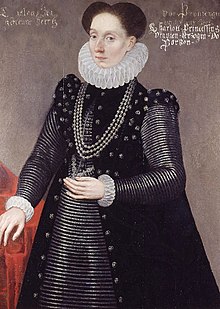 Many years of bloody fighting followed. City after city was besieged and taken by Alba. In the struggle for the freedom of the Netherlands, the two brothers Wilhelms, Ludwig and Heinrich , were killed in the Battle of Mooker Heide on April 14, 1574 . His brother Johann escaped the same fate only because he was on his way to Cologne to get money for the mercenaries.

After a long period of reflection, Wilhelm converted to the Calvinist faith in 1573 , already his second change of denomination. In 1571 the marriage with Anna of Saxony was dissolved. His marriage to Charlotte von Bourbon-Montpensier († 1582) in 1575 resulted in six daughters.

When Philip II could no longer pay his mercenaries in 1576, mutinies and looting took place everywhere. On November 8th, the " Ghent Pacification " took place, the union of all Dutch provinces against the Spaniards. Although this was an act of resistance from all seventeen provinces, unity did not last long. Wilhelm got Breda back, but stayed in Delft because Breda was the border between the Protestant north and the Catholic south and the city was therefore not a safe place. In 1579 the union split up into a northern, Protestant, called the " Utrecht Union ", and a southern, mainly Catholic, Union of Arras . On March 15, 1580 Wilhelm was ostracized by Philip II; a year later the Spaniards recaptured Breda.

In 1581, the Northern Seven Provinces declared their formal independence from Spain in the file van Verlatinghe and became a republic , the post of governor was offered to Wilhelm. Philip II then put a high bounty on Wilhelm.

After an unsuccessful assassination attempt on Wilhelm by the Biscay Jean Jaureguy (1562–1582) on March 18, 1582, Charlotte looked after her wounded husband for days and nights without sleep. In the end, she died of exhaustion on May 5, 1582.

A year later, in 1583, he married his fourth wife, Louise de Coligny , who was of Huguenot origin. In January 1584 they had a son, Friedrich Heinrich von Oranien-Nassau , who would later become governor himself. On July 10, 1584, Wilhelm was murdered in his Delft residence by the Catholic fanatic Balthasar Gérard .

Wilhelm was buried in a burial cellar in the New Church in Delft. The initially simple tomb was expanded into a magnificent monument by the sculptor Hendrick de Keyser and his son at the instigation of his widow from 1614 to 1623 . Almost all other members of the House of Orange-Nassau were then buried in this church.

Wilhelm I. - statue in Wiesbaden in front of the market church

Monument to Wilhelm I at the Wilhelmsturm in Dillenburg

Memorial in The Hague for the "Father of the Fatherland"

Bronze plaque for Wilhelm I on the Ginsburg

In the Netherlands, Wilhelm is known as the "father of the fatherland". His name was immortalized in a song, Het Wilhelmus , which was declared the Dutch national anthem on May 10, 1932. A statue of him stands at the Geneva Reformation Monument . Numerous schools and streets were named after him.

In 1788, Johann Wolfgang von Goethe incorporated Wilhelm von Oranien as one of the most important minor characters in his freedom drama Egmont , where he portrayed his personality quite aptly.

The sculptor Christian Friedrich Tieck created a bust for the Walhalla Hall of Fame in 1815.

In 1934, the life of Wilhelm was filmed by Jan Teunissen under the title Willem de Zwijger with Cor van der Lugt Melsert in the title role.

In 2004 a musical about Wilhelm entitled The Prince from Dillenburg was premiered in front of the Wilhelmsturm in Dillenburg.

A tulip was named after Wilhelm: The "Willem van Oranje" tulip blooms orange; the flower is reminiscent of a peony. It is an early bloomer and comparatively low.

From his connection with Eva Elinx :

Governor of Holland , Zeeland and (from 1528) the province of Utrecht