West tower of the Nieuwe Kerk

Floor plan of the Nieuwe Kerk 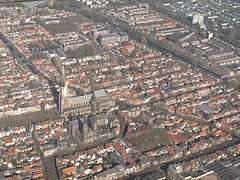 Delft with the Nieuwe Kerk

The Nieuwe Kerk ( German  New Church ) is on the market square of Delft ( Zuid-Holland ) opposite the town hall. It is one of the largest churches in the Netherlands and a work of brick Gothic. The west tower is 109 meters high, the second highest in the country, but its upper floors are made of ashlar . The Nieuwe Kerk is the grave church of the Dutch royal family ; 45 members of the dynasty are buried here.

The church was founded in 1351 under the rule of Albrecht I of Bavaria , Duke of Straubing-Holland , and was consecrated to Saints Maria and Ursula . It was the second parish church in the city after what is now known as the Oude Kerk (Old Church) and was therefore given the name Nieuwe Kerk . In the course of the Reformation, the Nieuwe Kerk was transferred to the Dutch Reformed Church in 1572 .

The first church was a wooden makeshift building, around which a large late Gothic basilica was built from 1396 . After completion of the transept , the wooden church was dismantled. With the completion of the west tower on September 6, 1496, the church was completed after exactly 100 years of construction.

As is usual in Calvinist houses of worship, the interior of the church is kept simple. Most of the furnishings were destroyed in an iconoclasm in 1566, the stained glass windows in the town fire in 1536, their successors in the explosion of the Delft Powder Tower on October 12, 1654. Today's third generation of painted glass windows date from 1927–1936.

The organ was built in 1839 by the organ builder Jonathan Bätz from Utrecht . The instrument has 48  registers on three manuals and a pedal .

Sepulcher of the House of Orange-Nassau

The New Church became the burial place of the Orange people through a historical accident. Prince Wilhelm of Orange , the leader of the Dutch resistance against the Spaniards, stayed only briefly in Delft, but was murdered on July 10, 1584 in the prince's court there . The traditional burial place of the Orange people in Breda was still in Spanish hands, which is why the prince was buried in Delft. Since Wilhelm is considered the founder of the Dutch nation and the kings are derived from him to this day, Delft was retained as the burial place of the royal family. However, some Orange people were buried in other places, including Wilhelm's eldest son Philipp Wilhelm (in Diest ) and Wilhelm III. of Orange , who was buried with his wife Mary as King and Queen of England, Scotland and Ireland in London's Westminster Abbey. The grave of the direct ancestor of the Dutch and several other kings, Johann Wilhelm Friso von Nassau-Dietz , is located in the Grote of Jacobijnerkerk in Leeuwarden , as the members of the Frisian branch of the Nassau family were buried there from the end of the 16th century.

Wilhelm's grand grave is located in the choir of the New Church. In the old crypt below, next to some children's coffins, there are the coffins of Wilhelm, his last wife, their son Friedrich Heinrich and his family, as well as Moritz , whose prince title had passed to his half-brother. The coffins of the Orange people who died later are in the new grave cellar. The most recent funerals took place in 2002 ( Prince Claus ) and 2004 ( Queen Juliana and Prince Bernhard ).

Members of the royal family are buried in the Nieuwen Kerk

Floor plan of the old and new grave cellar