The title of this article is ambiguous. See also: crypt chapel .

A burial chapel or burial church usually refers to a mausoleum or a church building that was primarily used as a burial place for noble or bourgeois families or a monastery or monastery. Some of these churches are still named for their function today. 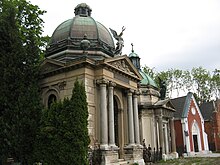 In particular, churches or chapels in which the graves of saints or politically, sometimes culturally important personalities are buried, are sometimes referred to as the grave church of these personalities.

Also because of their use as a columbarium for urn burials , former churches are called grave churches or grave churches , including St. Josef in Aachen as the first in Germany .

Funerary chapels in aisles of churches

In addition to the entire church buildings, there are also burial chapels, which only form an enclosed area within a side aisle of a church. The St. Marien Church (Stralsund), for example, contains several grave chapels in each of the two side aisles, in which coffins are stacked on top of each other behind a very representative display wall. These show walls, which are usually divided horizontally into three parts, a base zone, a main floor and an attachment, give many churches their special character.