Sepulchral Chapel on the Württemberg

Sepulchral Chapel on the Württemberg

The grave chapel on the Württemberg is a mausoleum located in the Rotenberg district of Stuttgart . The chapel is located on the summit of Württemberg , the extreme western foothills of the Schurwald above the Neckar valley . It was built for Katharina Pawlowna (1788–1819), the second wife of King Wilhelm I of Württemberg (1781–1864). Wilhelm I and their daughter Marie Friederike Charlotte von Württemberg (1816–1887) are also buried there.

Untertürkheimer Altenberg with the burial chapel

The burial chapel was built after the death of Queen Katharina between 1820 and 1824 according to the design of the Italian-born court architect Giovanni Salucci . It was built on the site of the ruined Wirtemberg Castle, the ancestral seat of the House of Württemberg . The consecration stone of the original castle chapel is located as a spoil in the burial chapel. It is a stone document stating that the Bishop of Worms Adalbert II consecrated the castle chapel on February 7, 1083 . The stone is also the earliest documented evidence of the Württemberg ruling house.

The burial chapel is open for tours from April 1st to November 30th. It is one of the state's own monuments and is looked after by the State Palaces and Gardens of Baden-Württemberg .

The design is noticeably inspired by the Villa Rotonda Andrea Palladios . As in the case of the grave chapel, there are identical porticos in all four directions around a central building, which is cubic there and cylindrical here. The chapel stands free in the midst of the vineyards above the Neckar valley and, with its colossal proportions, is completely geared towards the long-distance effect of its exposed location.

In the interior of the burial chapel, which is around 20 meters high and around 24 meters in diameter , colossal statues of the four evangelists are placed in wall niches. Like the two sarcophagi in the basement, they are made of Carrara marble and were made by court sculptor Johann Heinrich Dannecker (Evangelist Johannes), his student Theodor Wagner and based on designs by the Dane Bertel von Thorvaldsen . The statue of the evangelist Markus comes from the sculptor Johann Nepomuk Zwerger . 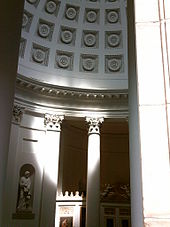 “Blessed are the dead who die in the Lord
! They rest from their work
because their works follow them. "

Commons : Grabkapelle on the Württemberg  album with pictures, videos and audio files