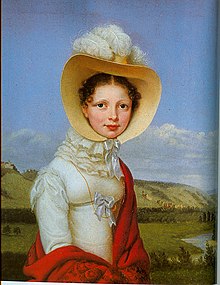 Sepulchral Chapel on the Wurttemberg in Stuttgart-Rotenberg

Obelisk in the Hohenheim Gardens by Markus Wolf (2008)

Grand Duchess Katharina Pavlovna was a daughter of Russian Tsar Paul (1754-1801) and his wife Marija Fjodorovna (née Sophie Dorothee, Duchess of Württemberg , 1759-1828). She had nine siblings, including the later Tsars Alexander I and Nicholas I.

According to the alliance and marriage contract concluded on October 1, 1799 at Gatchina Palace near St. Petersburg between the Electoral Palatinate of Bavaria and Russia , she was supposed to meet the Bavarian electoral prince Ludwig (son of Elector Max IV Joseph of Bavaria, from 1825 King Ludwig I. from Bavaria ). The marriage project met with decided opposition in the following years, in particular Napoleon , who himself intended to marry her, whereas Alexander's mother's attitude towards Napoleon stood against, which is why both marriages ultimately did not materialize. On August 3, 1809, she married Duke Georg von Oldenburg , who died of typhoid fever in 1812 after only a few years of marriage. Totally desperate and in great sadness, Katharina collapsed on his deathbed and fell seriously ill. The symptoms appeared to be of a more psychological nature - with daily fainting spells and often prolonged rigidity. She was probably suffering from catatonia .

In her second marriage, Katharina married her cousin, Crown Prince Wilhelm (1781–1864) of Württemberg, in Saint Petersburg on January 24, 1816 . The marriage came about at the Congress of Vienna in 1815, not least to improve the relationship between Württemberg, which was on the Napoleonic side, and its former opponents, Russia, Austria and Prussia.

Shortly after the marriage, her husband took over as King Wilhelm I in October 1816 in a time of need (crop failures, high prices, famine in Württemberg). Queen Catherine unfolded extensive charity work.

She became known through the founding of the "Central Charity Association", in which she worked together with middle-class men and women to alleviate hardship. Numerous other institutions, for example the Katharinenstift and the Katharinenhospital in Stuttgart , the Württembergische Landessparkasse and the welfare organization for Baden-Württemberg go back to them.

Katharina died surprisingly in January 1819. When she found out that Wilhelm I was not ready to give up his relationship with the Italian noblewoman Blanche de la Flèche (Baroness Keudelstein) († 1864), the queen went - wearing only a thin dress - Followed them to the Royal Private Stud in Scharnhausen , where she caught the flu in the winter cold. The disease was aggravated by shingles , which Katharina had suffered from since November 1818. The medical bulletin and the report on the section carried out give clear information on the cause of death. She had already caught a cold on January 3, 1819, but the next day she wanted to take a carriage ride to see the king in Scharnhausen. In addition, a sore had formed in the corner of her mouth, which she pierced herself. A bacterial infection developed. This rose wound led to a vascular occlusion in the brain, as the dissection of the skull has confirmed. Katharina died of a stroke at half past seven in the morning . The doctor's report notes: “IM spoke unhindered about various objects at 7am. After that, however, she passed out, her pulse weakened and she died. "

King Wilhelm I had a mausoleum ( grave chapel ) built for his wife on Württemberg near Stuttgart , in which she was buried in 1824. On his portal it is written: "Love never stops".

Two daughters from her second marriage to King Wilhelm I of Württemberg :