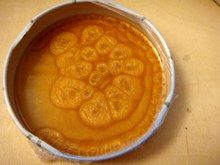 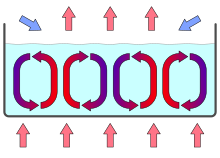 Bénard cells in side view

The Rayleigh-Benard convection is a natural convection in flat liquids with a special cell pattern . In the Bénard cells , the liquid rises in the center, cools down on the surface through evaporation and sinks back to the bottom with increased density at the cell edge.

The French physicist Henri Bénard described this in his dissertation in 1900 and the English physicist John William Strutt, 3rd Baron von Rayleigh, formulated the process mathematically in 1916.

Rayleigh-Bénard convection is an example of self-organizing structures and chaos theory . It is not to be confused with the Marangoni effect , which is based on surface tension.

Bénard cells from the side

Bénard cells in a layer of air

If the temperature difference between the ground and the surface is small, the forces resulting from the viscosity still predominate and the heat is transported from the bottom to the top only by conduction without the simultaneous transport of substances .

Above a critical temperature difference , however, this state becomes unstable, and heat is then transported by thermal convection . Due to the differences in density between the top and bottom, the liquid starts to move: on the warm underside it expands and rises due to the lower density, while the colder, denser liquid sinks in the upper area. The viscosity limits the speed of these movements. The convection or Bénard cells are usually polygonal when viewed from above and form roll patterns on the sides.

If there is an interface with a gaseous medium above the liquid , the convective heat transport is increased by possible differences in the surface tension at the interface. Since the tension usually decreases with temperature, points that are closer to a hot vessel wall have a lower surface tension than those further away from the wall. An additional driving force arises, which induces a flow in the direction of colder areas ( Marangoni convection ).

The temperature difference between top and bottom of the liquid continues to rise, so set from a second critical value period doublings a. The dynamic system gets into chaos on the Feigenbaum Route , turbulence develops , as Albert J. Libchaber first showed at the end of the 1970s.

Liquids with a low relevant viscosity, thin oil or gel are particularly suitable for carrying out the experiment . It has already been done with liquid, deep-frozen helium . The liquid's coefficient of thermal expansion must be positive. The temperature and flow velocity field of this experiment must satisfy the Navier-Stokes equation , the heat conduction equation and the continuity equation ( conservation law of mass ).

The world's largest simulation system for the experiment is the Ilmenauer Fass , a facility of the Technical University of Ilmenau .

The Bénard experiment is a standard example of the formation of dissipative structures in convective, open systems far from thermodynamic equilibrium . In principle, similar behavior can occur in all viscous media. In addition to model experiments with thin oil layers, one can discover similar behavior in the ocean , in the earth's mantle as mantle convection , or in the atmosphere in the form of hexagonal or roll-shaped cloud structures. The granulation on the sun's surface or the segregation of pigments with different densities in certain paints during drying are also based on this effect.

The study of atmospheric convection was the starting point that led to the discovery of deterministic chaos by the meteorologist Edward Lorenz in the early 1960s . He investigated the transition of thermal convection into a turbulent state within a medium. The system he set up for this purpose, consisting of three autonomous differential equations ( Lorenz attractor ), showed for the first time comprehensible chaotic oscillations within a deterministic system on the computer .