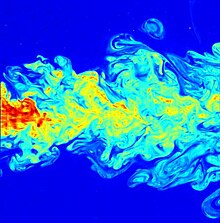 Snapshot from a simulation of a turbulent flow

The turbulent flow ( latin turbare rotate ' , worry', 'mess) is the movement of fluids , in which turbulences may occur in a wide range of size scales. This form of flow is characterized by a three-dimensional flow field with a temporally and spatially randomly varying component. The picture on the right illustrates the spatial aspect, the temporal z. B. the rustling of the wind.

Turbulence leads to increased mixing and consequently to an effectively increased diffusion coefficient . In the case of large-scale turbulence, the contribution of molecular diffusion is negligible. The mixing also affects the internal energy ( heat transport ) and the momentum .

The pressure loss of a fluid flowing through a pipe is based on the diffusion of the momentum towards the pipe wall and is greater with turbulent flow than with laminar flow . The turbulence is caused by the difference in speed between the flow in the middle of the pipe and the flow near the wall. With increasing flow, the intensity of the turbulence increases and the pressure loss increases approximately quadratically.

Turbulent flows are characterized by the following properties:

Example for (1): A cyclone is several kilometers in size, while the smallest vortices it contains are smaller than one millimeter.

Example for (2): The wind speed near the earth's surface fluctuates very strongly and is difficult to predict if topographical irregularities cause turbulence. For this reason, wind reports based on local measurements are usually drawn up before a wind turbine is erected.

Example for (3): The turbulent flow between the jet and the wall in the wall jet tilting element transfers the momentum into the slow part of the boundary layer and lets it flow away, which keeps the jet on the wall ( Coanda effect ).

Examples for (4): Snow on a wing dampens the large-scale turbulence in the detachment bubble and leads to flow stall even at lower angles of attack. Riblets on surfaces can reduce frictional resistance in turbulent flow, as can the small depressions called dimples on the surface of golf balls .

Turbulence can be defined as follows:

To illustrate the difference between laminar flow and turbulent flow, the physicist Osborne Reynolds carried out an experiment in coloring a water flow in a pipeline in 1883 and found that the turbulence in the pipeline can only be set above a limit speed. The Reynolds number Re is used as an assessment criterion .

Kelvin-Helmholtz vortices in the atmosphere behind Monte Duval, Australia

The linear stability theory deals with the change - also transition - of laminar flows into turbulent flows. To this end, it considers the growth of wave-shaped disturbances with a small amplitude, i.e. H. the growth of the Tollmien-Schlichting waves due to the Kelvin-Helmholtz instability .

Turbulence can also be caused by special shaping, for example in static mixers or by means of the dimples on the surface of golf balls .

In order to describe turbulent flows, the field variables such as velocity and pressure are broken down additively into an averaged term, which is superimposed by a statistical fluctuation ( Reynold's decomposition ):

The averaged size is the mean value over time.

If this decomposition is used in the Navier-Stokes equations , the Reynolds equations are obtained for describing turbulent flows , which, however, contain the Reynolds stresses as additional unknowns. Since you now have more unknowns than equations are closing approaches needed to solve the system. Different closure approaches (e.g. Boussinesq's approach and Prandtl's mixing path hypothesis ) have led to different turbulence models (e.g. the turbulence model ).

The following quote shows how difficult, diverse and poorly understood the turbulence is:

“If I should go to heaven, I hope to be cleared up about two things: quantum electrodynamics and turbulence . I'm pretty confident about the first wish. "

Lewis Fry Richardson laid the foundation for further turbulence research in 1922 by establishing the current conception of this phenomenon. After his pioneering interpretation of the energy is on a larger scale in a turbulent flow supplied by the decomposition of vertebrae by all the scales through transported (so-called. Inertialbereich ) and at the smallest scale in heat dissipated . This is known as an energy cascade .

The theory of turbulence was significantly advanced by Andrei Nikolajewitsch Kolmogorow in his work from 1941 and 1962, when he was able to statistically evaluate Richardson's scale argument using a similarity hypothesis and thus derive the Kolmogorov 5/3 law for the inertial range . After this hanging power spectral density with an exponent of - 5 / 3 of the circle wave number k from:

The dissipative range is also named after Kolmogorow and is called the Kolmogorow microscale . 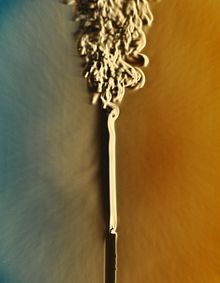 Schlieren photography of a candle