The Reynolds number or Reynolds number ( symbol :) is an index of the number dimension named after the physicist Osborne Reynolds . It is used in fluid mechanics and can be understood as the ratio of inertia to viscosity forces (or the ratio of specific momentum convection to momentum diffusion in the system). It turns out that the turbulence behavior of geometrically similar bodies is identical with the same Reynolds number. This property allows, for example, realistic model tests in a wind tunnel or water channel .

The Reynolds number is defined as

If the Reynolds number exceeds a (problem-dependent) critical value ( ), a previously laminar flow becomes susceptible to the smallest disturbances. Accordingly, a transition from laminar to turbulent flow is to be expected. In ideal liquids there is no viscosity and the Reynolds number is infinite.

In the MGD will magnetic Reynolds number defined. 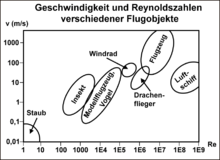 Velocities and Reynolds numbers of some flying objects

The diagram on the right compares the velocities and the corresponding Reynolds numbers of the currents around some flying objects. For example, the Reynolds numbers of airships are higher than those of airplanes . They move at a slower speed, but they are significantly larger.

The Reynolds number is an important quantity within the similarity theory . For example, if you want to examine a scaled-down model of an airplane in a wind tunnel , the Reynolds number of the original and the model must be the same in order to obtain a similar flow field. Correspondingly, if the model is reduced by a factor , the ratio must be increased by the factor . Since the maximum speed is limited, the viscosity of the air in cryogenic wind tunnels is also reduced by cooling, thereby increasing the air density at the same time. In this way, Reynolds numbers of up to 5 · 10 7 can be achieved in sample chambers with a diameter of two meters. This procedure is very expensive, however, since the channel and the model usually have to be cooled with liquid nitrogen. When cooling down, care must be taken that no icing forms. A further increase in the Reynolds number can also be achieved by increasing the static pressure.

Grains of dust are very small. When they fall through the air , they have a Reynolds number as low as a steel ball falling into a jar of honey. It moves in a laminar (i.e. without vortex formation) through the fluid. The Reynolds number also plays a role in the design of wind turbines . They can be used to determine the stall on their wings and thus design the system for the desired wind speeds.

In the case of pipe flows , the internal diameter , the amount of the averaged velocity over the cross section and the viscosity of the fluid are usually used as characteristic variables .

A value of or is often quoted in the literature . It goes back to measurements by Julius Rotta (1956).

The critical Reynolds number , which marks the transition between turbulent and laminar flow, is not only dependent on the geometry of the application, but also on the choice of the characteristic length. If, for example, the pipe radius is selected instead of the diameter of the flow as the characteristic length dimension of a pipe flow, the numerical value that should indicate the same thing is halved . Since the critical Reynolds number is a value that does not mark a sudden change, but rather a broad transition area of ​​the flow conditions, the numerical value usually used is not , but is rounded up.

In the case of channel flows , the hydraulic diameter , the amount of the mean flow velocity over the cross-section through which it flows and the viscosity of the fluid are used as characteristic values .

In the case of a stirrer, the Reynolds number is determined by the diameter of the stirrer, its speed in 1 / s, as well as the density and dynamic viscosity of the liquid:

To avoid confusion, this Reynolds number should be marked, here with the index for “stirrer”. When the flow at the stirrer is considered turbulent.

Assessment of a turbulent flow

In order to characterize the degree of turbulence , the Reynolds number can also be formed with turbulence-related quantities (turbulent Reynolds number ). The variance of the speed and the integral length of the flow, for example, are then used as characteristic variables . In addition, there is the (molecular) viscosity of the fluid .