In free fall, water takes on a teardrop shape due to air resistance . In weightlessness the drops are spherical.

The surface tension is the phenomenon that occurs in liquids as a result of molecular forces to keep their surface area small. The surface of a liquid behaves like a stretched, elastic film. This effect is what causes water to form droplets , for example , and helps some insects run across the water or allow a razor blade to “float” on water. 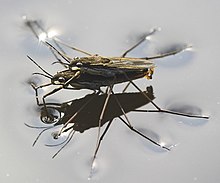 A pair of water striders use surface tension

The surface tension (Formula Symbol: , ) is thus a surface tension that occurs between liquid and gas phases. It is measured in the SI units kg / s 2 , which is synonymous with N / m .

In a broader sense, the near-surface tension on solids is also referred to as surface tension. Eye-catching examples are balloons or toughened glass .

Surface tension is a pulling force that is localized on the surface of a liquid and its direction of action is parallel to the surface of the liquid. Accordingly, a liquid surface is always under tension . A liquid surface can thus be compared to a slightly stretched thin film, only that the tension does not depend on the elongation.

The surface tension of the water carries a paper clip

The surface tension gives a liquid surface special properties. Non- wetted objects can float on a water surface as long as their weight is not sufficient to overcome the surface tension. This becomes clear when, for example, a paper clip - made of greasy iron wire - is placed on the surface of water. It is not or only partially wetted, sinks a little below the water level, but takes the surface with it, dents it. The surface tension acts on the paper clip with vertical force components and carries it. This effect is also used by living things such as the water strider in order to be able to walk on a surface of water.

Surface tension is what causes liquids to take on a spherical shape when no other forces act on them. An extreme example of this are drops of liquid in space that are almost not exposed to external forces. After mercury as the front runner among pure substances, water has a particularly high surface tension. This drops significantly as the temperature of the water rises and can be radically reduced by adding even small amounts of surface-active substances ( detergents ).

A practical example are particularly small water droplets. To explain this, think of a liquid whose shape is not spherical. The surface tension acts parallel to the surface of the liquid and compensates for locally deviating curvatures .

When other forces act on a drop of liquid, its shape deviates from the spherical one. An example of this are raindrops with a diameter of more than 1 mm and drops of liquid on a solid surface, where additional attractive forces act between the solid and the liquid ( adhesion ). The shape of the drop deviates more from the spherical and wets the surface of the solid, the higher the adhesion between solid and liquid.

Another example of the effect of surface tension is the hexagonal shape of honeybees' honeycomb cells . The cells are first built around beeswax . However, the material yields (flows) due to the temperatures prevailing in the beehive and forms flat interfaces ( minimal surfaces ) between the individual cells.

Liquid clamped in a bracket. A force pulls parallel to the liquid film and increases its surface (front and back) .

The correctness of the idea of ​​surface tension as a force parallel to the surface is shown in numerous measurement methods and effects such as the ironing method, capillarity or the contact angle .

This shows the analogy between the idea of ​​“missing binding energy” and the mechanical definition.

However, this clear interpretation is not yet sufficient to define the surface tension thermodynamically. To do this one goes from the change in the Gibbs free energy at a constant temperature and constant pressure which is described by equation (1), wherein the enthalpy , the temperature and the entropy features.

One can rewrite this equation by inserting the definition of enthalpy and taking into account that it holds.

The surface tension causes the drink to bulge over the glass.

The change in internal energy is used, where stands for the work done. The following applies to the amount of heat . It follows:

The expression for work can be broken down into a term for volume work and non-expansive work .

The surface tension is therefore thermodynamically defined as the partial derivative of the free enthalpy according to the surface at constant temperature and constant pressure. 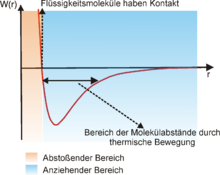 Schematic representation of the Lennard-Jones potential as a function of the distance r .

The idea of ​​the missing liquid molecules on the surface intuitively leads to the assumption that the surface tension is a force vertical to the liquid surface. However, this does not agree with the mechanical definition of surface tension. In order to bring the mechanical definition into line with the thermodynamic one, one has to consider that within a liquid both attractive and repulsive forces act on a molecule. While in a solid body either attractive or repulsive forces act locally, because the particles are in fixed places, the molecules in a liquid are mobile. The distances between the liquid molecules can change and thus repulsive and attractive forces can act on a liquid particle. This fact can also be illustrated in a Lennard-Jones potential . This generally describes the potential between two uncharged particles as a function of their distance. If the particles come into contact at short distances, they repel each other, while at greater distances they attract. While the distance between two particles is fixed in a solid body, it can change in a liquid due to the thermal movement , which enables attractive and repulsive forces on a liquid molecule. The picture on the right shows a schematic representation of a Lennard-Jones potential, which explains the forces between liquid molecules. If the liquid molecules are in contact, they repel each other (orange area), while at great distances they attract (blue area). In a liquid, the distances between the particles change constantly due to the movement of heat, which is shown by the black double arrow in the figure. This means that both attractive and repulsive forces can act on a liquid molecule.

Representation of the forces that act on a molecule on the surface of the liquid and in the interior of the liquid.

Illustration of the surface tension as a force parallel to the liquid surface.

Schematic representation of the change in density and surface tension on a liquid surface. 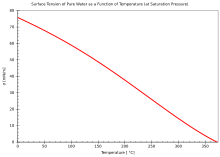 Temperature dependence of surface tension using the example of water 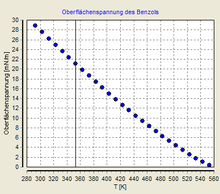 Temperature dependence of the surface tension using the example of benzene

The surface tension can be measured, for example, with the help of the ring (from Lecomte De Noüy ), plate (from Wilhelmy) or bracket method (from Lenard), with a tensiometer or by the capillary effect.

The lying or hanging drop can also be measured using an optical evaluation and thus the surface tension of the liquid can be determined. 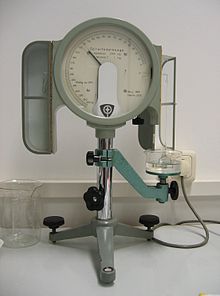 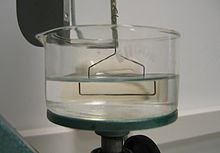 Strap in the liquid

With the ironing method (also known as the tear-off method), a hanger with an extremely thin wire (usually made of platinum ) soldered into it is hung in the liquid so that it is just immersed in the liquid and is wetted by it. The tensile force on the bracket is then gradually increased using a precision spring balance. The wire is then pulled out of the liquid and pulls a film of liquid with it. At a certain point this film breaks down.

For liquids such as ethanol and wire lengths of 2–3 cm with a radius of 0.1 mm, the expected value for the mass is in the two to three-digit milligram range. So very precise scales are required. With a measurement uncertainty of the balance of 5 mg and a measurement of the wire with an accuracy of 1 µm, the largest error in the final result is already 8 to 12%.

Measurement with the capillary effect

Capillary in the measuring liquid

This measurement method makes use of the capillary effect, i.e. liquids rise up in thin tubes. You need a vessel ( e.g. a cuvette ) and the thinnest possible capillary . This is then simply placed in the liquid and the height of rise is measured.

Since the liquid theoretically needs infinitely long to reach its final level, the liquid is first drawn up in the capillary (e.g. with a syringe) and then allowed to sink again. The surface tension can then be read off directly from the height of rise if the density of the liquid and the capillary radius are known. Since the measurement is quite difficult, it is believed disposable micro- pipettes and measures their length. Since the volume is known, the inner radius can be calculated in this way.

In capillaries with a radius of 0.2 mm, water rises up to 7 cm. A cathetometer , for example, is suitable for measuring the height of rise as precisely as possible . If the density of the liquid is known exactly and the height of rise can be read with an accuracy of 0.1 mm, the error is in the lower single-digit percentage range.

The term surface tension was first used by Niccolò Cabeo in 1629 and clarified by Johann Andreas von Segner in 1751 . Valuable contributions were made to the theory in 1805 by Thomas Young , in 1806 by Pierre-Simon Laplace , in 1830 by Siméon Denis Poisson (see also Young-Laplace equation , Young's equation ) and from 1842 to 1868 by Joseph Plateau .