This article covers the honeybees genus ; for the most frequently kept species, see Western honeybees and Eastern honey bees . 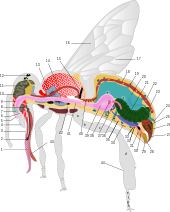 Anatomy of a honey bee worker 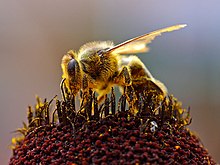 The honey bees ( Apis ) are a genus from the family of real bees (Apidae). Depending on the taxonomic view, the genus comprises seven to twelve state-forming species , most of which are native to Asia .

For the global beekeeping has Western honey bee the most important; in many Asian countries also there originally occurring is Apis cerana in simple log hives or cavities held by walls. These two species breed in the shelter of caves and have thus been able to spread very far out of the tropical regions into more moderate climatic zones, whereby regionally different subspecies have emerged, especially in the western honeybee . A natural boundary of the settlement is often formed by mountains or islands .

There are also wild species with free-hanging nests that are used to a modest extent for honey production , especially the giant honey bee and the dwarf honey bee - this is known as honey hunting . The cliff honey bee is threatened with extinction .

The genus includes small to moderately large species, with body lengths between 7 and 19 millimeters. They are relatively elongated in outline and moderately densely hairy, including the complex eyes, which are also hairy. In the workers, the mandibles have neither teeth nor keels. As with the queens, their claws are split, between them an arolium sits as an adhesive pad on smooth surfaces. The tibiae of the hind legs do not have spurs; like the first tarsal phalanx, they are dilated in females as a collection device for pollen and form a cup (corbicula) ( cup collector ). A characteristic of the wing veins is particularly typical for the genus . The radial cell of the forewing is very elongated, about four times as long as its distance from the tip of the wing, its tip (apex) rounded. The wing mark ( pterostigma ) is narrow and inconspicuous. The genitals of the males (called drones) are weakly sclerotized and simplified in structure, the endophallus located inside the aedeagus is greatly enlarged .

Research into honey bees has made many discoveries over the last two centuries, see also the history of beekeeping . In the course of time, as elsewhere, many classifications in the system ( taxonomy ) have been revised again due to more recent findings.

Traditionally, the species are differentiated according to morphological features. Morphometry has a long tradition with bees . Morphometric calculations make it possible to assign even small or large individuals of variable shapes with overlapping features to a certain shape. This is particularly necessary with races and subspecies. Phylogenomics has been added to morphometry as a new discipline , in which different lines are differentiated on the basis of homologous genes or DNA sequences. Nevertheless, the rank and status of some forms is scientifically controversial to this day.

The species with a wide range, mainly western and eastern honeybees, split into several subspecies. In addition, there are also regional forms, such as the subspecies also called races (wings).

The American entomologist and Hymenoptera specialist Michael S. Engel evaluated the previous taxonomic literature in 1999 and considered 178 nominal species in the genus Apis (according to modern opinion). In his opinion, only seven species, which are divided into three sub-genera, are justified. Later editors built on Engel's work as a basis, but reinstated two of the species he had synonymous with, so that today predominantly nine species of the genus are assumed. The status of three others is controversial. Based on genetic data, Nathan Lo and colleagues propose that the subspecies Apis dorsata breviligua from Luzon and Apis cerana indica from South India, and possibly also Apis dorsata binghami from Sulawesi , be considered as separate species.

The nine types of honeybees

Because of its morphological special position, the genus is the only one (monotypically) placed in a tribe Apini . As far as we know today, it belongs to the basket collectors , a monophyletic group of species that also includes the bumblebees , the magnificent bees and the stingless bees . The South American genera Centris and Epicharis then form their further relationship . The Apini's direct sister group may be the magnificent bees. Some species of stingless bees are also used as honey suppliers.

Fossils that are assigned to the genus Apis are from the Oligocene and Miocene from Europe, Asia and, surprisingly, also North America, and thus outside of the current natural range of the genus. Some of the best finds come from the Randecker Maar fossil deposit . Numerous species have been described, mostly due to the details of the wing veins, including Apis henshawi Cockerell and Apis armbrusteri Zeuner, some of which are very similar in their morphology to the recent Apis cerana and Apis mellifera . One possible explanation would be that at least in Europe there was only one species of the genus, which was morphologically quite variable. The fossil species of the genus are very similar to the recent species, so that it can be assumed that the genus remained morphologically almost unchanged over many millions of years.