Two genes (or proteins ) are homologous to one another if they descend from a common ancestor.

If two genes in the nucleotide sequence match in more than 30% of their nucleotides in the sequence, a cause other than the common ancestry is considered unlikely; these two genes are therefore considered to be homologous. The same applies to the amino acid sequence of produced from the genes proteins , wherein the homology is assumed to be a sequence identity of over 10%.

Homology of genes does not necessarily lead to homology of organs. For example, it cannot be ruled out that homologous genes and thus also homologous proteins are found in two completely different, non-homologous tissues.

Homologous chromosomes contain the same genes in the same sequence of gene locations, but these can exist as different alleles . This means that the chromosomes of paternal and maternal origin can differ in a diploid cell.

This concept of homology must be distinguished from the homology of different organs , which is considered in phylogenetics and evolutionary theory .

Homology between genes of different species

Homology between two genes can only be determined if the sequences are not yet so far apart that the similarity between them is only as great as between two random sequences. This depends not only on the elapsed time, but also on the degree of conservation of the respective sequence. The enzymes of important metabolic pathways such as glycolysis are highly conserved:

For example, an amino acid sequence identity of 60 to 80% is customary between homologous mammalian genes , and that of 40 to 60% between homologous vertebrate genes . If the identity falls below 10% (5% corresponds to a random result), any existing homology would actually no longer be detectable. In fact, even below 30%, the existence of homology is questionable, since independent protein domains often have a certain similarity ( parallel evolution ). Other exceptions are short and tandem sequences , as the probability of a coincidental similarity is greater here.

Homology between duplicated or foreign genes 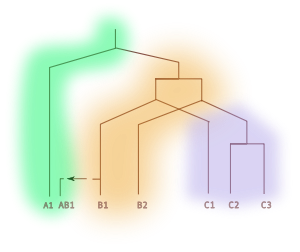 Evolution of a gene. The idealized development of a gene from an original population A into two new populations B, C. A sloping branch represents a speciation event, a horizontal line a gene duplication. Horizontal gene transfer also takes place between B and A. (Scheme: WM Fitch)

If there were only new species formation events, then there would be a corresponding gene in every other organism for every gene. Gene duplication and horizontal gene transfer can lead to additional gene copies that evolve over time with gene drift. To more clearly distinguish the homology relationships between such genes, the following terms are used: Two genes are paralogous to one another if their common precursor gene has undergone gene duplication. Two genes are orthologous to one another when their common ancestor has gone through a speciation event. They are xenologous if one of them has a horizontally transferred ancestor (see figure, B1 and C1 are orthologous to one another, B1 and B2 paralogue, A1 and AB1 xenologous).

Furthermore, one speaks of (1: n) orthology if it is sequence X in species A and sequence Y in species B and there is a sequence Z in species B which is paralogous to Y and which is directly orthologous to X. Conversely, Y and X are (n: 1) orthologues . In both of these cases, one of the species has diversified and there is a gene duplication between X and Y (see figure, B1 and C2). Finally, (m: n) orthology between X and Y means that diversification has taken place in both species and that there are therefore two gene duplications between X and Y (not shown in the figure). Correspondingly, strict orthology is referred to as (1: 1) orthology in this context . Real examples of these relationships are the ratios between individual MADS box proteins .

Gene duplication and horizontal gene transfer are the most common biological processes that increase the number of genes. The number of genes is reduced by deleting or inserting nonsense sequences.

By comparing the base sequence of homologous genes, degrees of correspondence and thus genetic distances between related species can be determined. If a point in time of the last common ancestor of these two species is known, the points in time of their last common (as yet unknown) ancestors can be determined from the degree of similarity of these genes for other closely related species.

The degree of genetic match can be viewed differently in the course of a sequence alignment , which can also result in discrepancies in the reconstruction of the temporal course of different examiners with a molecular clock :