While nucleosides only consist of base and sugar, nucleotides also contain phosphate groups. Differences between individual nucleotide molecules can therefore exist in the nucleobase , the monosaccharide and the phosphate residue.

Nucleotides are not only linked as monophosphates (NMP) in the information-carrying macromolecules of nucleic acids. They also have various other functions for the regulation of life processes in cells . Triphosphates (NTP) such as adenosine triphosphate (ATP) play a central role in the transfer of energy between metabolic pathways, as a cofactor for the activity of enzymes , for transport through motor proteins or the contraction of muscle cells. Guanosine triphosphate (GTP) binding ( G- ) proteins transmit signals from membrane receptors ; cyclic adenosine monophosphate (cAMP) is an important intracellular messenger substance .

Structure of a nucleotide

A nucleotide is made up of three components:

Four nucleotides each with a different base (C, G, A, U) in N- glycosidic bond to β- D- ribofuranose (gray) - linked to one another via the phosphate group (turquoise)

The base is usually linked to the sugar via an N- glycosidic bond , the sugar to the phosphate via an ester bond ; If more than one phosphate group is attached, these are linked to one another via phosphoric acid anhydride bonds . In addition, nucleotides naturally occur in which sugar and base are linked via a C-glycosidic bond, for example pseudouridine (Ψ) in transfer RNA .

In the DNA the four nucleobases A, G, C, T are used, in the RNA the four bases A, G, C, U; Instead of the thymine in DNA, uracil is used in RNA. The individual nucleotides differ in the base and the sugar, the eponymous pentose, which is deoxyribose in DNA and ribose in RNA .

Linking of nucleotides to nucleic acids

The macromolecule of a DNA or an RNA is composed of four different types of nucleotides, which are linked by covalent bonds to the strand of the polymeric biomolecule, a polynucleotide . The reaction taking place here is a condensation reaction . A pyrophosphate residue is split off from the monomeric nucleoside triphosphates , so that the monosaccharides of the nucleotides are each coupled to one another via a phosphate group that connects the C5 'atom of the next with the C3' atom of the preceding pentose. 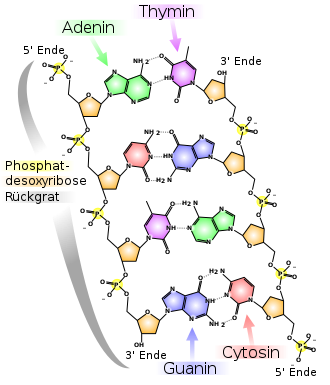 Typically, a (smaller) pyrimidine base (T, C) and a (larger) purine base (A, G) each form a pair. The base pairs from T and A and from C and G are referred to as complementary : Opposite a nucleotide that contains cytosine as the base, there is usually a nucleotide with guanine as the base (and vice versa); the same applies to the base pair of adenine and thymine. The opposite bases of the nucleotides of two strands are connected to one another in the DNA double helix via hydrogen bonds . There are three between bases G and C and only two between A and T.

This base-pairing mechanism not only allows the formation of DNA helices. By assigning the complementary base to each of the bases of a single strand, it is also possible to rebuild a complementary single strand. This happens, for example, during replication with the help of a DNA polymerase .

RNA molecules are also made up of nucleotides, with the difference that here ribose is used as a monosaccharide instead of deoxyribose, and that uracil is used as a base instead of thymine. The small differences in the structure of single-stranded RNA and DNA molecules do not prevent them from forming hydrogen bonds between complementary bases as well. Complementary base pairings are also possible within the same strand molecule. For example, certain sections of an RNA molecule can lay on top of one another and fold into hairpin structures . Multiple loop formations are also possible, even typical for the formation of the trefoil structure of tRNA molecules. Although RNA can also be double-stranded, also as a helix, most of the biologically active RNA molecules consist of a single strand.

Three interconnected nucleotides represent the smallest unit of information that is available in DNA or in RNA for coding the genetic information. This information unit is called a codon .

Nucleotides as mono-, di- and triphosphates

Nucleotides consist of a nucleoside and a residue of one, two or three phosphate groups.

Deoxyribose as a sugar

Artificial dideoxyribonucleoside triphosphates (ddNTPs) are used, for example, in DNA sequencing according to Sanger .

Letter symbols are used for the notation of the bases of nucleotides in nucleic acid sequences. In order ambiguities ( Engl. : Ambiguity ) to take into account incomplete specified nucleobases, was accepted by the Nomenclature Committee of the International Union of Biochemistry and Molecular Biology of Ambiguity Code proposed:

Note the difference between the generic symbols W, S, ... and the so-called wobble bases . There are modifications of the above symbols and additional symbols for non-standard bases and modified bases, such as the Greek letter Psi, Ψ for pseudouridine (a wobble base).

However, many of the symbols above are also used as alternatives for synthetic bases, see DNA §Synthetic bases . A selection:

In addition to the use of nucleotides as combined nucleic acids in DNA and RNA , nucleotides also have several functions as monomer molecules . Examples of this can mainly be found in energy supply , coenzymes and hormonal biology .

In terms of energy, nucleotides occur through adenosine triphosphate or adenosine diphosphate and adenosine monophosphate . Resistant from 3 phosphates, an adenosine group and a ribose molecule, ATP and its energetically inferior splitting products ADP and AMP can also be classified as nucleotides.

Certain coenzymes also contain nucleotide components. An example of this is the coenzyme A .