This is generally a biological process in which mechanical forces are generated in muscle tissue . In the case of skeletal muscles , these forces are transmitted to the bones through tendons .

The forces caused by conversion of chemical to mechanical energy by means of actin - myosin - complex in the individual muscle cells , in turn, the chemical energy from the hydrolysis of ATP relates.

A muscle is a part of the tissue in most multicellular animals , which as a whole rests on a bone or other muscle in a mobile manner (displaceability through layers of loose connective tissue , fascia and boxes ) and, through its connections with tendons , is capable of internal limbs body districts (abdominal pressure during coughing , urination , defecation , parturition etc .; respiratory motion ) to move and, ultimately, the individual allows forces to its environmental practice (eg. as a nail into the wall to beat) and himself getting around .

To move parts of the body against resistance, e.g. B. to lift a leg, which has a considerable weight, or even to slow down from running or jumping, the muscle must be able to exert force on the points of attack on the bones via the tendon apparatus. This requires a continuous frictional connection that must include all parts of the tendons and muscles.

According to the principle “The chain is as strong as its weakest link”, this frictional connection must include all elements of both the coarse and the fine structure of the muscle structure. This includes different levels: the muscle as a whole tissue part, the muscle fiber, the myofibril and, in a longitudinal structure, the sarcomere as the smallest section of the myofibril. At the transitions between muscle fiber / muscle fiber ( endomysium ), fibril / fibril, endomysium / tendon, perimysium / tendon, etc. up to the transitions between the sarcomeres within the fibril, the structures must be able to control and partially redirect the forces that occur (shear forces). The muscle fibers can exert a force of up to 40 N per cm² of muscle cross-section and can passively bear loads of up to 100 N / cm².

It is noticeable that of the structures that transmit the tendon forces, the endomysium in particular contributes to the transmission by being connected directly to the radiating tendon ends. Since the endomysium directly absorbs the forces exerted on the ends of the actin filaments (see below) via myotendinous connections, the frictional connection is guaranteed here.

In addition to the transmission of force in the direction of the contraction, the prevention or redirection of shear forces is an important task that the muscle fulfills through mechanisms of mechanical connection, but also by controlling the contraction of the muscle fiber cells. Here, the transversal structures, which ensure the cohesion of the fibrils into fibers and, in turn, the fibers into muscle cords, are of great importance. From a mechanical point of view, the costamers and the desmin filaments should be mentioned here, with regard to the control and thus reduction of shear forces, the synchronization of the work of the sarcomeres and thus of the fibrils through the rapid transmission of the action potential generated by the end plates in the longitudinal and transverse direction via the so-called triads. This is a transverse structure that encompasses the fibrils and consists of two terminal cisterns of the sarcoplasmic reticulum and a transverse tubule, which morphologically represents an indentation of the plasma membrane and which transmits the action potential both in length and in depth. There it ensures the opening of specific Ca cation channels, which triggers the contractile mechanism.

Description of the contraction mechanism 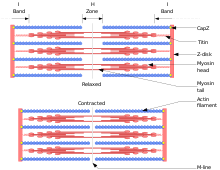 According to the sliding filament or filament sliding theory of Andrew F. Huxley and Hugh E. Huxley, filament proteins slide into one another during contraction without changing their length and thus shorten the length of the muscle. The filament proteins are actin , the outer, thin filament , and myosin , the inner, thick filament , which pushes past the thin filament and thereby enables contraction. This movement is made possible by changes in the chemical configuration and thus the shape of the myosin molecules: The myosin has small extensions (“heads”) that can change their angle to the rest of the molecule (“shaft”). The heads can in turn bind to the actin filaments and move them in so-called “rowing movements”. The contraction is triggered by a nerve impulse . In addition, energy in the form of ATP is required to dissolve the myosin from the actin . If this is no longer available, the molecules can no longer separate from one another and rigor mortis occurs . 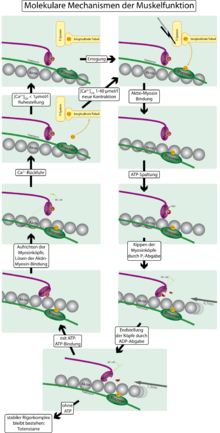 A cross-bridge cycle takes 10–100 ms and shifts the filaments by 10–20 nm, which is only about one percent of their length. To enable a greater change in length, the cycle must therefore be run through several times. With around 50 grip-release cycles, the sarcomere can shorten by around 50% of its rest position in significantly less than a second.

If the Ca 2+ concentration falls below 10 −7 mol / l, the tropomyosin threads loop around the actin filament again so that no new bonds can form with the myosin heads - the muscle relaxes, which is referred to as muscle relaxation . For this it is necessary to transport the calcium out of the muscle tissue by active ion pumps . The involvement of calcium ions in muscle contraction was first demonstrated by Setsuro Ebashi .

Some of the details of the sliding filament theory have not yet been conclusively clarified. For example, the exact geometric configuration of the myosin heads is the subject of current research.

More complex forms of contraction can be put together from these elementary types of contraction. They are most commonly used in everyday life. These are z. B.

With regard to the resulting change in length of the muscle and the speed at which this takes place, contractions can e.g. B. can be characterized as follows:

isokinetic ("same speed")
The resistance is overcome with a constant speed.
concentric
the muscle overcomes the resistance and thereby becomes shorter (positive-dynamic, overcoming). The intramuscular tension changes.
eccentric
Here the resistance is greater than the tension in the muscle, thereby the muscle is lengthened (negative-dynamic, yielding); the muscle "brakes" a movement, it acts to prevent falls. There are changes in tension and lengthening / stretching of the muscles. This form of load or contraction occurs, for example, when going downhill in the anterior thigh muscles ( M. quadriceps femoris ).