The Persian Gulf is a relatively shallow body of water with a maximum depth of 110 m. Its volume is about 6000 km³, with an average depth of less than 26 meters. It is connected to the Gulf of Oman and the Arabian Sea and the Indian Ocean via the Strait of Hormuz . The confluence of the Tigris and Euphrates , the Shatt al-Arab, flows into the Persian Gulf . Due to the low inflow of fresh water and the high rate of evaporation, the salt content is above average at around 4%.

During the last glacial maximum , when the sea ​​level was around 120 m lower worldwide , the bottom of the Persian Gulf was a flat valley through which the rivers Euphrates, Tigris and Karun found a common drain to the Strait of Hormuz. With the onset of the Flanders Transgression around 11,000 years ago, the level rose to around today's conditions.

The countries bordering the Persian Gulf

The countries bordering the Persian Gulf are (from north to south along the coast):

Of the eight countries bordering this body of water, seven are members of the Arab League , the eighth - and the one with the longest coastline - is Iran. With the exception of Iran and Iraq, the other six states form the Gulf Cooperation Council . Iran, Iraq, Kuwait and Saudi Arabia have been founding members of the Organization of Petroleum Exporting Countries (OPEC) since 1960 , while Qatar (1961) and the UAE (1967) also joined the organization a little later.

Due to its economic and geopolitical importance, the Persian Gulf was the scene of the three so-called Gulf Wars . In addition, border disputes between the neighboring countries have occurred and continue to occur .

Shipping traffic along the Tunb Islands

A special feature is the navigation around the Iranian Tunb Islands and through the Strait of Hormuz. There, ships are divided into incoming and outgoing traffic separation areas in order to reduce the risk of collisions along the Strait of Hormuz. The affected line is approx. 10 km wide and consists of two 3 km wide lanes, one inward and the other outward. The two tracks are separated from each other by a third, also approx. 3 km wide median track.

One of the worst shipping accidents to date in the Persian Gulf occurred on April 8, 1961, when the British combination ship Dara went up in flames, burned out and sank off Dubai after an explosion on board. 238 passengers and crew members died. 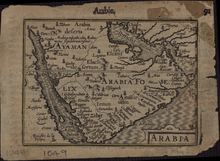 Persicus Sinus ( Latin ) on the map by Jodocus Hondius from 1598

Various names are used internationally for the Persian Gulf, the term "Persian Gulf" ( Persian خليج فارس Khalidsch-e fārs ) is mainly used. This has been in various Persian and Greek sources since pre-Christian times, and since the Islamic era also in Arabic ( Arabic الخليج الفارسي al-khalīdsch al-fārisī ) and European sources.

In the Arab (neighboring) states, however, the neologism “Arabian Gulf” ( Arabic الخليج العربي al-khalīdsch al-ʿarabī ) enforced; Since then, the term has appeared sporadically in Western media, as an alternative designation by the National Geographic Society and in printed works. Colloquially and also in the media, only the term “The Golf” is often used. In Germany, the term “Persian Gulf” was in use until the beginning of the 20th century. Before that, the name "Gulf of Bassora" ( Gulf of Basra ) was common, which is still in use today in Turkey ( Turkish Basra Körfezi ). On old German maps, the golf is sometimes called the “Green Sea”. In Persian, the term "Gulf of Jam" (named after Jamschid from Iranian mythology )was also used in the past. The former Akkadian name of the Persian Gulf was nar Marratû ("bitter stream"). The International Hydrographic Organization (IHO) has officially used the term "Gulf of Iran" since 1953.

The question of naming is a political issue in some countries and has repeatedly caused diplomatic disputes, especially between Iran and the Arab states. The United Nations also had to deal with this question several times. In 2006, one of its expert groups stated in this context that the United Nations internally adhered to the term “Persian Gulf”, but that “states cannot be forbidden to “ create and use ” exonyms ” for geographical names.