Combi ship or combi freighter is the abbreviation for a combined cargo and passenger ship .

The Scharnhorst combi freighter from 1935 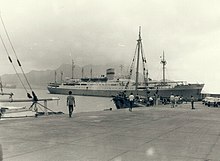 A combined ship, also known as a cargo passenger ship , is or was a watercraft with a special construction, equipment and facility for the simultaneous transport of conventional cargo and passengers. Combined ships differ from pure cargo ships in that they have a greater number of accommodation options in a wide variety of classes for passengers. Traditional combination ships were built and used until the middle of the 20th century. In regular service and tramping , they drove overseas, especially at the time of mass emigration in the 19th century to the early years of the 20th century. The Hapag and North German Lloyd had three combination vessels Hamburg Süd those four.

Well-known German examples are the combined ships of the Schwabenstein class of Norddeutscher Lloyd , the Cap Norte of Hamburg Süd or the Potsdam , Scharnhorst and Gneisenau of HAPAG . A GDR television series from the 1970s also made JG Fichte of the German shipping company Rostock famous.

More recently, also as LoPax (short for Lift On / Lift Off for freight and at the same time for passengers , often abbreviated PAX ) one designates ships that mainly transport goods as well as more than twelve passengers. The RoPax ships differ in the type of loading and unloading via ramps .