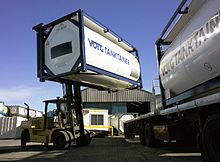 Cargo - even cargo or cargo mentioned - is transported that of one carrier against payment is conveyed. The remuneration for the transport of freight is referred to as freight . Load is a term for the actual transport between loading and unloading.

The transporters are called freight carriers (in Austria freight forwarders ). You do not organize the transport, but carry it out, mostly on behalf of a freight forwarder. The amount of the freight is agreed in the freight contract and usually recorded in the consignment note . Since the transport law reform in Germany in 1998 no longer required the creation of a consignment note for national transports, but delivery notes , loading lists or comparable papers can also be used as accompanying documents, consignment notes are increasingly no longer being issued. There are three original copies of the waybill. One copy remains with the sender after the carrier has confirmed the acceptance of the freight. The second remains with the carrier as a delivery confirmation after delivery of the freight and the third receives the recipient.

In the event of controls, the consignment note must be handed over to the customs and police authorities as well as the Federal Office for Goods Transport (BAG).

There are freight goods that are subject to notification and the transport of which requires an express official permit. Heavy haulage requires an official permit and if certain dimensions are exceeded, according to § 29 paragraph. 3 StVO (excessive road use) definitely requires escort vehicles and / or an escort by the police in order to initiate safety measures and ensure that everything runs smoothly. If the freight to be transported falls under the Dangerous Goods Ordinance , the transport vehicle must be marked with appropriate warning signs in addition to compliance with regulations relevant to dangerous goods . In addition, the vehicle driver and any co- driver will also need an ADR certificate .

The distribution of the freight costs between the sender and recipient is regulated by the delivery conditions set out in the sales contract , in international goods traffic by the Incoterms .