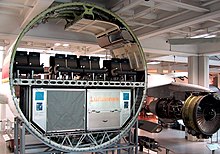 Cross-section of a passenger Airbus A300 with underfloor cargo space 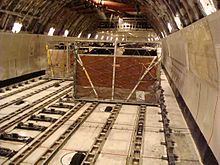 Main deck of a Boeing 747 with pallet and transport system

A cargo plane (short freighter , Eng. Freighter ) is an aircraft for the transportation of commercial cargo . In contrast, transport aircraft are designed for military cargo transport and, in contrast to all current larger cargo aircraft, do not always have a pressurized cabin . In some cases, however, the concepts are mixed up, especially with Soviet aircraft such as the Antonov An-124 , which were developed as transport aircraft, but also transported air freight, or Western types that came from purely civil to military use such as the Boeing 707 .

Cargo planes mostly belong to special cargo airlines or subsidiaries of passenger airlines. The larger proportion of air freight is transported in passenger aircraft in the underfloor cargo hold in addition to the passengers carried on the main deck ( belly capacity ). Today's large-capacity passenger aircraft allow a very high cargo load on the lower deck (e.g. Boeing 777-300ER up to 25 t), so that the use of pure cargo aircraft is no longer necessary. The new Airbus A330 and Boeing 777 passenger aircraft delivered in 2012 alone can transport as much cargo as 45 Airbus A300-600 freighters in the underfloor holds alone. In cargo planes, the main deck can also be used for cargo, as they have no seats, only a transport system for pallets and aircraft containers. The underfloor deck, which is also used, is not reduced by passenger luggage. In addition to the doors to the underfloor cargo area, cargo planes usually have a cargo door on the side or, less frequently, a bow door ( Boeing 747 original freighter ) to the main deck, via which the aircraft is loaded and unloaded.

While the first larger cargo aircraft, the Douglas DC-8-55F with 201 m³ and the Boeing 707 with 145 m³ as narrow-body aircraft, still had limited volumes, the air cargo market was greatly expanded with the introduction of the Boeing 747-200F with 705 m³ in 1971. With the introduction of US overnight delivery in 1978 by FedEx , there was a great need for smaller short-haul freighters, which was mainly met by converted Boeing 727s . After this business grew, the larger DC-10 also became interesting in 1981 . These five types dominated the market until the mid-1990s. 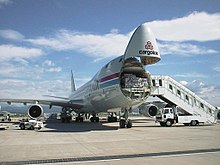 The aircraft manufacturers offer freighter versions of their types as

The convertible versions, which usually also have a cargo door on the side, were often ordered by pure passenger airlines in the past, in the hope that this would facilitate resale. Boeing sold 337 of the 707-320C .

The converted Airbus A300 , the passenger windows and now unused doors can still be seen

Often older machines that have had their day as passenger aircraft are converted into cargo aircraft ( Passenger to Freighter Converson, P2F ). The typical conversion age is 12-18 years. Airbus leads exclusively even by the same aircraft plants by Boeing also uses partners, also are still IAI Bedek , ST Aerospace and Flight Structures Inc. owned by Supplemental Type Certificates diverse to rebuild Boeing types and the MD-11 . The conversion takes 72 days at Airbus. In order to convert a passenger aircraft into a cargo aircraft, the following points are usually changed on the aircraft:

The proportion of original new freighters compared to converted passenger planes in long-haul freight planes has risen sharply since 2008 from less than 40% to over 70%. The reason for this is the high oil prices , which require significantly lower annual flight hours for the new types in order to be more profitable than old aircraft types. In the case of regional freighters, on the other hand, newbuildings only play a minor role due to the short flight routes. Accordingly, an average large freighter is 14 years old, a medium-sized 21, and a small 28 years old.

Frontal view of the Antonov An-225, the largest cargo aircraft in the world

Special but very rare cargo planes for extraordinarily large or very heavy loads, usually aircraft fuselages in assembly, are the Superguppy , the Airbus Beluga (A300-600ST) and the Boeing 747 LCF . The largest cargo aircraft is the Antonov An-225 . It was designed as a transport aircraft (i.e. for military purposes); there is only one flying specimen of it. The heaviest air cargo ever transported in an airplane was 247 t in an An-225. The largest connected part weighed 189.8 t and was also transported by an An-225.

Airbus had the intention at times to offer the 'Airbus A380' also in a freighter version ( Airbus A380F ). The project was "frozen".

The Shuttle Carrier Aircraft (SCA), a modified Boeing 747, carried the space shuttle piggyback for the first flight tests in 1977 and later regularly from the landing to the launch site.

Transport under a carrier aircraft was often used to lift an experimental aircraft into the atmosphere in order to save it from having to take off on its own and to make it easier to reach a great height and / or high speed. For example, from 1946 Bell X-1 was worn on the belly of a Boeing B-29 or B-50 as a mother aircraft. The Boeing X-51 unmanned demonstration aircraft with ramjet engine was dropped from a Boeing B-52 from 2010 .