Basra ( Arabic البصرة, DMG al-Baṣra ; also Basrah or Bassora ) is a city in southern Iraq . It is located on the Shatt al-Arab about 100 kilometers from its confluence with the Persian Gulf and is the country's most important port. Basra is the capital of the Iranian province of Khuzestan bordering province of Basra , and not least because of the oil industry, the most important city in the majority of Shiites lived in southern Iraq. It is one of the first cities founded by the Arabs after the conquest of the Middle East .

The name Basra probably comes from the Arabic Al-Basrah , which means the one who has an overview or the one who sees everything . The naming shows the military importance for the Arabs. Other sources claim that the word is derived from the Persian Bas-rāh or Bassorāh , which means where many paths meet . In medieval European sources the city was called Balsora .

Boat on the Shatt el Arab in Basra

With 1,914,205 inhabitants (2010 calculation) it is the third largest city in Iraq after Baghdad and Mosul . Almost all of the residents are Arabs . Over 95% of the population are Muslims , of which over 86% are Shiites and 9% Sunnis and smaller minorities such as Christians and Mandaeans 5%.

With average temperatures of +40  ° C in summer and +12 ° C in winter, the area around Basra is one of the hottest in the world.

The area around Basra is an important oil production region, the city itself is home to oil refineries (with a capacity of 140,000 barrels per day) and chemical industry . The oil fields around Basra have 64% of Iraq's oil reserves. At the same time, the area around Basra is a fertile agricultural region; among other things, dates , rice , maize , barley , millet and wheat are grown in winter (the summer is too dry and too hot for this).

In the port of Basra a new one is 2,019 container terminal commissioned.

The Basra airport is located in the west of the city

The 1152 meter high skyscraper “The Bride” is being planned in Basra . The billion project is to be the tallest building in the world.

The city has its own Basra University . 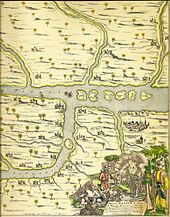 Basra (on the right as Baffora civitas) on a European map of the 17th century.

In 638 , at the behest of the caliph ʿUmar ibn al-Chattāb, a military base and trading post was established by General Utba ibn Ghazwan on the site of the old Persian settlement Vaheštābād Ardašīr . The Arabs used the base to fight the Sassanid Empire from here . The city of Basra was formed around this camp.

On December 9, 656 , the warring supporters of the fourth caliph and son-in-law of the Islamic prophet Mohammed , ʿAlī ibn Abī Tālib , and his opponents met at Basra, who denied Ali's claim to the caliphate. The battle , which went down in history as a camel battle, ended with a victory for Ali's party . Until the end of the 670s, members of the Arab tribal association of the Tamīm and Qaisitic groups set the tone in Basra, when the immigration of the Azd led to a shift in strength. During the Second Civil War (683-691) Basra belonged to the rulership of ʿAbdallāh ibn az-Zubair , who first appointed the Meccan ʿAbdallāh ibn al-Hārith and then his own brother Musʿab ibn az-Zubair as governor of the city.

In the early 8th century, the influential Islamic legal scholars Jabir ibn Zaid († between 711 and 723), al-Hasan al-Basrī (642–728) and Qatāda ibn Diʿāma († 735/6) worked in Basra . In 720 the Arab military leader Yazīd ibn al-Muhallab brought the city into his hands and carried out an uprising against the Umayyads from there. The city remained an important center of scholars. One of the most important hadith scholars of Basra around the middle of the 8th century was ʿAbdallāh ibn ʿAun († 768). Many well-known legal and traditional scholars from other cities and regions, including al-Auzāʿī († 774), Sufyān ath-Thaurī († 778) and Yazīd ibn Hārūn († 821), came to Basra to study. At the same time, the city functioned as the mission center of the Ibadite movement. Basra reached its cultural climax in the 9th century, when the theological and philosophical movement of the Muʿtazila had its center here. You also belonged to writers such as al-Jahiz (776-869). In the following century the city was the center of the "Brothers of Purity" (Arabic Ikhwan as-Safa , اخوان اصفاء), a philosophical-religious secret brotherhood, whose encyclopedia had an influence on Islamic science. Al-Hariri (1054–1122), an Arabic poet and grammarian who became known for his macaques , also worked in Basra .

Until the Mongol invasion under Hülegü in the 13th century, Basra was a flourishing trading center and metropolis. Since then, the city has lost more and more importance. The traveler Ibn Battūta found the city largely derelict in the 14th century. After the Ilkhan various dynasties ruled over Basra, such as the Jalairids , the Safavids and, since the 16th century, the Ottomans . Afrasiyab († 1624), a local large landowner, navigated between the Safavids and the Ottomans, established contacts with the Portuguese and was able to establish a largely independent rule over Basra from 1612. His successors Ali and Hussein ruled the city until 1668, before it was again subjugated by the Ottomans, who made peace with the Safavids in 1639.

In the 18th century, the new city of Basra was re-established a few kilometers from the old city. The remains of old Basra and the base are outside the city and can be seen in the shape of a hill. Basra remained Ottoman until World War I , when it was occupied by Great Britain in 1914 .

The British occupiers modernized the city, whereupon Basra became the most important port city in Iraq. During the Second World War , Basra was an important transshipment point for aid supplies from the Western Allies to the Soviet Union . At the end of the war, Basra had 93,000 inhabitants.

In 1964 the University of Basra was founded. The population reached around 1.5 million in 1977, but then fell to possibly as much as 400,000 during the First Gulf War between Iraq and Iran . During this war, Basra was fiercely fought and was shelled several times from Iranian territory, but never fell into the hands of the Iranians.

In the Second Gulf War in 1991, Basra was again heavily destroyed by Allied air raids.

After the war, Basra was the center of the revolt of the southern Iraqi people against Saddam Hussein. The uprising broke out on 2 March 1991 and was based on the promise of Bush -Regierung, Saddam Hussein overthrow. However, after the insurgents had not received any support from the Allies , at least 3,000 people died in Basra.

In the Third Gulf War in 2003, Basra was again one of the most important theaters of war. British associations have since occupied the city. In early September 2007, the British armed forces gave up their base in the Palace of Basra and initially withdrew to the city's airport. At the end of 2007, Basra was returned to the Iraqi authorities. Since then, supporters of the Shiite leader Muqtada al-Sadr and the Iraqi government troops have repeatedly fought fierce battles over the important oil port.