The Shatt al-Arab , also Arvandrud , is a river in Iraq and Iran , which in part forms the border between these two states. It is also an important waterway for inland navigation in both countries.

"Shatt al-Arab" ( Arabic شطّ العرب, DMG Šaṭṭ al-ʿArab ) literally means coast of the Arabs . In Persian the name Arwandrud ( Persian اروندرود, DMG Arvandrūd ; "Arvand River") used. Although the name Arwand ( Middle Pers . For "nimble"; from avest. Auruuant- ) is already used in Ferdausis Schahnama and in Sassanid sources (but extended to the Tigris ), it was only declared the official name during the reign of the Pahlavi dynasty been.

The Shatt al-Arab arises in Iraq at the confluence of the Euphrates and Tigris rivers about 60 km northwest of the city of Basra . Its southern course forms the border between Iraq and Iran and flows 50 km downstream from Abadan into the Persian Gulf . The river is 193 km long.

The alluvial land around the Shatt al-Arab and thus also the Shatt al-Arab itself did not come into being until historical time. At the time of the Sumerians , the coastline was about 250 km further northwest and the Euphrates and Tigris flowed into the sea as independent rivers. Extensive deforestation in the catchment area of ​​the upper reaches of the river has led to increased erosion since ancient times; the eroded material sedimented due to lower flow velocities and flooding in the estuary. 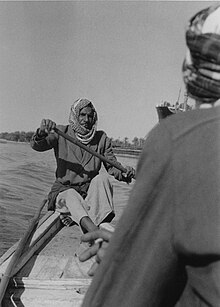 Basra at anchor , the Arab ferryman brings the sailors ashore - 1958 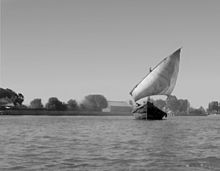 Dhow on the Shatt al-Arab near Basra in 1958

One of the factors that contributed to the hostilities between Iraq and Iran was the dispute over navigation rights on the border river. The Treaties of Erzurum (1823/1847) and the Protocol of Constantinople signed in 1913 established 75 percent of the general demarcation between Iraq and Iran.

For the Schatt al-Arab / Arvand Rud shipping lane, shipping law from 1847 to 1913 was as follows: the east bank was drawn, and both parties could use the valley route . In the Treaty of 1847, the Ottoman Empire insisted that the question of sovereignty be left open, which was later to be resolved by a four-power arbitration commission. In 1920, Iran questioned the demarcation of the eastern bank, as the additional protocol of 1913 stipulated the curiosity: Iraqi pilots and Iraqi law on Iranian ships. The expansion of the port of Khorramshahr and the oil refinery of Abadan intensified the conflict.

With the Treaty of Saadabad on July 4, 1937 the first border treaty between Iraq and Iran was signed. The joint use had thus been ratified by both sides, regardless of the precise demarcation that was later to be resolved by a commission. This commission never came to a conclusion, but the Saadabad Additional Protocol, which granted the administration of the river to the Iraqi side, continued to apply. Between 1941 and 1946, control of the Shatt al-Arab lay solely with the Allies.

On April 19, 1969, Shah Mohammad Reza Pahlavi terminated the Saadabad Treaty and agreed with Iraq in the 1975 Agreement of Algiers on the Talweglinie as the border. In return for the territorial concessions, Iran stopped providing financial support to the Iraqi Kurds . The Iraqi authorities complied with the Shah's request for greater surveillance of the Ayatollah Ruhollah Khomeini , who was then in exile in Iraq .

On September 17, 1980, Saddam Hussein canceled the Algiers Agreement and claimed full sovereignty over the Shatt al-Arab. In return for the cessation of the acts of war that began shortly afterwards ( see: First Gulf War ), Saddam Hussein demanded that Iran not only return the Tunb Islands and Abu Musa to the UAE, but also the full sovereignty of Iraq in Shatt al-Arab. The war ended in 1988 with the status quo ante bellum .

After the 2003 Iraq War, the UK was tasked with guarding the waterway and preventing illegal arms shipments into Iraq in connection with UN Security Council Resolution 1723. On March 23, 2007, 14 male soldiers and one female Royal Navy soldier were arrested by the Iranian side, creating a diplomatic crisis. The government in Tehran accused British seafarers of entering Iranian territorial waters. According to the British representation, however, they were in Iraqi waters. Iran's President Mahmoud Ahmadineschad pardoned the soldiers on April 4, 2007. They returned to their homeland a day later.

In 1852, in an accident, priceless works of art from Major Sharrukin sank in the river and were to be transported to Paris .