The title of this article is ambiguous. Further meanings are listed under Seemann (disambiguation) . 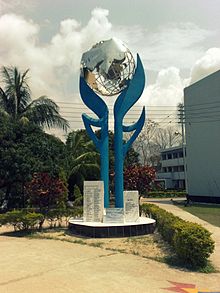 Seaman , plural seafarers , denotes people working on board a ship. According to the relevant international Maritime Labor Convention (MLC) , the minimum standards of which are also based on the German Maritime Labor Act for ships flying the German flag, the term seafarer is much broader than according to previous legal definitions. By 2013 came into force MLC, the term seaman now includes all persons performing "indeed any activity" on board, and it is unerherblich whether an effective of agreement is, therefore, a seafaring employment whether a particular qualification is present and how long or how often the people do their job. As a result, service personnel on cruise ships are also among the seafarers, for example.

The captain (also captain, master, senior, skipper ) on board a ship is a nautical engineer who (today) has acquired his nautical patent through school or technical college training , first for at least one year as a nautical officer on watch and then either a Year as first mate or two more years as officer in charge of the navigational watch. As the legal representative of the shipowner, he manages the entire ship operation and is responsible for it ( merchant shipping ). There are sometimes two captains on very large ships.

In the German Navy the term captain is handled differently, the meaning as in civil life does not exist in the Navy at all:

In the German Navy is the commander of the Gorch Fock in rank Captain . All other ships are led by frigate captains. Boats are usually subordinate to a lieutenant captain .

The mechanical engineer / lead engineer ( LI , also Chief for English Chief Engineer ) is the second most important person in ship operation after the captain . As head of the machinery, he is responsible for all technical matters on board.

Officer in charge of the navigational watch

The officer in charge of the navigational watch (1st, 2nd, 3rd or 4th) has acquired a patent to operate a seagoing ship. With his watch over the bridge he is responsible for the safety of the ship and the surrounding traffic ( vehicle driver ). Today training is based on the international STCW -95 standard for international shipping.

The sailor was a skilled worker in the merchant navy until 1983. A seaman after completing his three-year apprenticeship and exam at a German seaman's school was referred to as a seaman with a letter , the official name was: seaman in shipping and the examination included qualification as a lifeboat and fire protection officer. The apprenticeship began as a cabin boy (called Moses, as Moses was dumped in a rush basket as a child), usually after a year you were a young man , after another year an ordinary seaman . The sailor got out with extensive experience at sea was colloquially known as Able Seaman called.

In the German Navy , a sailor is the lowest rank of the crew (Abbreviation Matr ). Because of the different areas of activity in the Navy, a seaman does not necessarily need to have nautical training or employment. The typical uniform consists of a. of a white plate cap , a white sailor shirt with blue and black Exerzierkragen node cloth with white bow and a blue pants. The colloquial expressions “ stoker ” or “black gang” were also common for seafarers in machine operation.

The appropriate term for a fully qualified seaman in English is "able (bodied) seaman" (AB or A / B). In the Royal Navy there is the Able Seaman rank with NATO rank code OR-2.