This article deals with the captain as a skipper, further meanings under captain (disambiguation) . 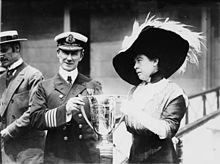 The word captain (from the Latin caput "head", "head", stemming capit- , and derived from capitaneus "leader"), also skipper or sailor , has found its way into almost all European languages and referred among other leader of a ship . The leaders of warships are called commanders ; however, the leaders of civilly manned naval auxiliary ships are referred to as captains.

In recreational boating , one speaks of skippers , who are usually experienced skippers and are on an equal footing with the captain in their function. The training is much easier, however.

The northern European medieval sailing ships sailed under a skipper known as the “Master” (Low German “Meester”). This “master” was the nautical and nautical leader of a ship. His helpers were called "Mates" (English) or " Maate " (in Low German to this day in the plural form "Maaten").

When they began the merchant ships (there was in Northern Europe at that time no full-scale war ships) to arm for protection from raids, they gave the "Master" a military "Captain" or "Captain" (ie captain ) together with some officers and marines with that took over command of the ship in the event of a fight.

Ultimately, the previous skippers (the Meester and his mates) were completely subordinated to the military and only formed the nautical management personnel on board who were responsible for sailing and navigation. From then on, the actual skipper was called the captain, and his direct assistants were the ship's officers . The military “captain” became a ship's captain and not, as is often assumed, the other way around.

In order to underline the dual function of military and nautical guides, commanders of military sloops were appointed as “masters and commanders” in the 18th and early 19th centuries , while on larger ships a separate “sailing master” was responsible for navigation.

Even today, the rank of "captain" in English-speaking armies corresponds to a German captain (equivalent to a lieutenant captain in the navy ). In the English-speaking navy, however, the rank of "captain" corresponds to the German sea ​​captain (corresponding to a colonel in the army and air force). In order to avoid confusion between the captain of land and air forces on the one hand and the senior captain of the navy on the other hand, the latter often uses the suffix ( USN ) (in the USA) or ( RN ) (in Great Britain) in correspondence . In the English-speaking police - with the exception of the British, where the captain approximates the rank of chief inspector - district managers or comparable leadership ranks of the criminal police are also referred to as "captains". This rank is roughly comparable to a German police / criminal superintendent or first police / criminal superintendent.

The various tasks and responsibilities can be comprehensively described using German maritime trade law ; it was reformed in the HGB in April 2013 . According to Section 478 of the German Commercial Code (HGB), the ship's crew consists of the captain, the ship's officers , the ship's crew and other people involved in ship operations. The captain is authorized to carry out all transactions and legal acts for the shipowner that the operation of the ship usually entails ( Section 479 (1) HGB). This formulation corresponds to that of an authorized representative . The captain must enter all accidents that affect the ship, people or cargo during the voyage in a ship's logbook . The captain is authorized to issue bills of lading ( Section 513 (1) HGB). 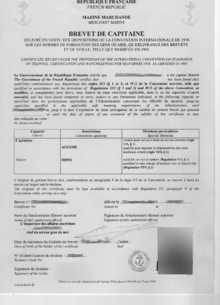 Master's license of the French merchant navy (after 1995)

The Maritime Labor Act (SeeArbG) comprehensively regulates the roles of the captain and crew, among other things. The captain was therefore the ship's leader appointed by the shipowner and had to hold a state certificate of competency (“captain's patent”; Section 5 (1) and (2) SeeArbG). He is the owner of the ship's power, is responsible for the nautical and administrative management of the ship and is the landlord. He is the superior of all crew members ( Section 121, Paragraph 1 SeeArbG) and is responsible for maintaining order and safety on board (Paragraph 2); to avert danger, he can also enforce orders with means of coercion, including temporary arrest (para. 3). These processes trigger an entry in the ship's diary. The diary is to be signed by the captain and is considered a document, especially in the event of later legal disputes. Since the television series Das Traumschiff at the latest , it must be made clear that a marriage as a so-called "high sea wedding" by a captain who does not also have the qualification of a registrar is not permitted and not valid on a German ship, even if the ship is international Waters. A captain is always bound by the law of the country under whose flag his ship sails. In Germany, marriages may only be concluded in front of the registrar ( Section 1310 (1) BGB). To weddings at sea to prohibit, subject to United States Navy , for example, the following provision: ". The commanding officer is allowed to carry on board his ship or aircraft any wedding ceremony" Is the captain a ship about because of unseaworthiness on (. English abandonment ), it is abandoned . The task requires the master's exercise of discretion or will. If this person and the crew are forced to leave the ship by pirates or foreign ship crews, there can be no question of giving up. Captains are mostly employed by shipping companies. Port masters work in larger ports .

The captain must have the patents required to operate the watercraft in the respective sailing area. The training takes place at seafaring schools or universities of applied sciences . Captains with a university degree in nautical science hold the academic degree of Dipl.-Nautiker or Dipl.- Industrial Engineer Maritime Transport or Dipl.-Ing. Maritime transport , since the switch from diploma to bachelor's degree programs, they have been awarded the title of Bachelor of Science (B.Sc.) ; Captains who have completed their training at the technical college have the title of state-certified technician .

The following important information is missing from this article or section: Help Wikipedia by researching and pasting it .

The skipper of a civilian cargo ship is the "captain" (NK). This is a position, not a rank. The captain only keeps watch himself on smaller ships . On larger ships and on long voyages he is usually off watch , and the officers or helmsmen of the watch (" watch officers ") keep the watch .

Captain on a long journey

Captain on a long voyage is the outdated, but still common name for a captain on merchant ships of all sizes in all areas with the exception of fishing vessels. The basic license required for this as a nautical officer can be acquired at technical schools (state-certified navigator) or at technical colleges (Bachelor of Science).

Captain on a short trip

Captain on a short voyage is the outdated but still common name for a captain on merchant ships with a capacity of up to 500 in the national voyage, with the exception of fishing vessels. The basic patent required for this can be acquired at a technical school.

The 1921 Barcelona Agreement allowed landlocked states to operate ocean-going shipping under their own flag. In contrast to the situation in Germany, according to the Austrian Maritime Law of 1981, the captain is a permanent agent appointed by the shipowner. He retains his title even after leaving the ship:

§ 20. (1) The captain appointed by the shipowner for an Austrian seagoing vessel (§ 511 HGB) is entitled and obliged to exercise the authority on board.
(2) The captain of an Austrian ocean-going vessel must be on board for the entire duration of the voyage and exercise the authority himself, unless he goes ashore in a port that is necessary or customary.
(3) If the master is not on board or if he is prevented from performing his duties, the next member of the deck crew in rank shall exercise the duties and powers of the master.

Apprenticeship as a captain in merchant shipping

In order to become a captain in merchant shipping, one has to obtain the qualification "Nautical Watch Officer " at a technical college or university in Germany . This is followed by an experience driving time of at least two years net. You then receive a certificate of competency as a nautical officer / master.

In order to obtain the certificate of competency through the university of applied sciences, one must have at least the technical college entrance qualification.

In order to obtain a certificate of competency at a technical college, one must have learned a seafaring-related profession including the required seafaring time (sailor, ship mechanic or ship technical assistant). However, lateral entrants also have the opportunity to register at a technical school with a metal trade and experience.

The term commander as a leader of warships describes a position that is independent of the military rank of the skipper. The ship's commander is either a staff officer ( corvette captain , frigate captain , rarely a sea captain ) or, on smaller ships and boats ( e.g. submarines ), a lieutenant captain . Deviating from the rule that commanders are principally officers, the commander on landing craft is usually a portepee sergeant .

In principle, all staff officers of the Navy, with the exception of the medical officers, are addressed as "Mr. or Mrs. Captain", regardless of their exact rank, but without pronouncing the i in the word, ie with "Mr. Captain". Captain lieutenants are traditionally addressed in naval jargon as "Herr Kaleu". On the other hand, it is not common to use the address "Mr. or Mrs. Commander".

The leader of a sports motor or sailing ship has all the rights and obligations of a captain and as such is responsible for the safe management of the ship and crew and for guests and cargo.