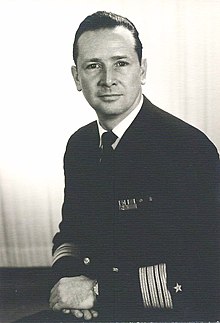 Rudolf Arendt as frigate captain of the German Navy (1966)

Frigate Captain is a military rank in the Navy .

Frigate captain is one of the ranks of the Bundeswehr for naval uniform wearers . The legal basis is the order of the Federal President on the rank designations and uniforms of soldiers and the Soldiers Act .

In the central guideline A2-2630 / 0-0-3 "Forms and Celebrations of the Federal Armed Forces" (formerly ZDv 10/8), the salutation of all staff officers in naval uniform is set as "Mr. Captain". In the Navy, it is also traditionally customary to pronounce “captain” like “captain” when addressing informally orally.

The rank badges of the frigate captain show four sleeve stripes on both lower sleeves ; three stripes are medium-wide, the second on top is narrow.

The rank designation of equivalent air force and army uniform wearers is Lieutenant Colonel . With regard to the authority to command, appointment , pay , the subordinate and superordinate ranks, similarly also with regard to the positions, frigate captains and lieutenant colonels are equated. In the NATO rank code , the frigate captain corresponds to the rank code OF-4 and therefore, for example, to the US commander .

The frigate captain was the middle rank in the rank group of staff officers in the People's Navy of the GDR and was comparable to the NATO rank code OF-4. He corresponded to the lieutenant colonel of the NVA.

The rank badge consisted of shoulder pieces with a navy blue background and a braided silver cord on which two square gold-colored shoulder stars were attached. Shoulder pieces were worn with all parts of the uniform.

The sleeve badge consisted of four yellow-colored simple stripes and should not be confused with that of the captain at sea of the Kriegsmarine and the German navy . Above it was the career badge . In contrast to all other German naval forces, the sleeve badges only covered about 40% of the sleeve circumference.

In the German Empire and the German Navy , the frigate captain designated the middle officer rank of the staff officers' rank group .

In 1898 the rank of frigate captain was introduced in the German navy . He came in place of the "corvette captain with the rank of lieutenant colonel" that was customary up until then. The badges of rank consisted of four sleeve stripes with a star on the shoulder pieces . In the German Empire, an embroidered crown was sewn on in place of the starfish. Until August 1, 1940, frigate captains wore the same 4 (medium) wide sleeve stripes as captains at sea. Anyone who was promoted from this point on should keep the 3 stripes of the Corvette Captain. Those who had previously been promoted were allowed to keep the 4 stripes. The narrow sleeve stripe was introduced from April 1, 1944 and no longer adopted by all "4-stripe frigate captains".

The rank of frigate captain was and still is in the Austrian and Russian navies .