Verviers (German outdated Velwisch ) is a city in eastern Belgium and is located in the valley of the Weser (French: Vesdre ) in the northern foothills of the Ardennes . It belongs to the province of Liège in the Walloon Region . The German border is not far away, and Aachen is about 30 km. Verviers is the capital of the district of the same name , to which 29 parishes belong. 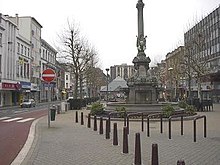 Place Verte in the center

Verviers was known around the world well into the 20th century as the center of the wool trade and textile industry . The starting point of the textile industry was the soft (i.e. almost lime-free) water of the Weser, which was ideal for washing wool and other textiles. The low lime content of the water in the Weser is explained by the fact that the Weser and its tributaries are fed by the moors of the High Fens . Today a museum reminds of the time of the textile industry. Today there is a production facility for solar modules here .

Since the municipal merger in 1977 , the city ​​of Verviers has also included the former municipalities of Ensival, Heusy, Lambermont, Petit-Rechain and Stembert . The city of Dison and Verviers form a closed urban zone.

The numerous town houses from the Wilhelminian era, which characterize entire streets, are worth seeing. Since the beginning of the 1990s, increasing efforts have been made to make the cityscape more attractive. Verviers calls itself the "Walloon capital of water", numerous newly built fountains, water features and a "Musée de l'eau" illustrate this. The “Center Touristique de la Laine et de la Mode”, where changing exhibitions and seminars take place, reminds of the history of the textile industry.

Sacred buildings are the Saint-Remacle church from 1838 and the Notre-Dame des Récollets church, completed in 1650. The former post office (1909) with style elements from Gothic and Renaissance is in the direct vicinity of Fontaine Ortmans (1895). The neoclassical theater from the Wilhelminian era, the Palace of Justice and the town hall from the late 18th century are further sights.

The Verviers main station, built between 1925 and 1930, has an Art Nouveau reception building. It is one of the rare equestrian stations that are laid across the tracks .

Not far from Verviers is the Gileppe Dam , which has ensured the city's water supply and industry since 1878.

The Assahaba Mosque is the largest mosque in Wallonia.

Verviers is on the Aachen – Liège ( –Brussels ) line. At the main train station Verviers Central every hour hold IC trains of line 01 ( Eupen -Brüssel- Ostend ). InterCity (line 12) from Welkenraedt to Kortrijk from Monday to Friday . This is also where the Verviers-Palais stop is located, which is only served by the local train between Aachen and Spa . Aachen Hbf can be reached every hour with the euregioAIXpress .

Furthermore, the line to Spa-Géronstère has its starting point in the train station.

The last three cities mentioned are linked as “textile cities” with Verviers and with each other through partnerships.