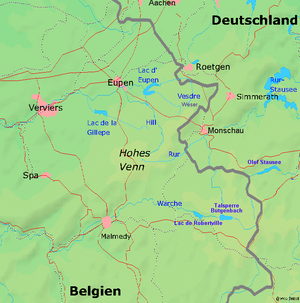 Map of the High Fens

The High Fens ( French Hautes Fagnes , Dutch Hoge Venen ) is a cross-border, shield-shaped arched plateau between Germany and Belgium with an area of ​​over 600 km². 133 km² of this is in Germany. In Belgium approx. 54 km² (5,368  ha ) of the Venn area is state-owned and placed under nature protection as domanial nature reserves of the High Fens , after it grew by 500 hectares on Belgian territory in 2018.

Large areas are designed as raised bogs , from which the name is derived: Venn, Fenn ( Dutch Veen ) for bog . With 694  m OP , the Botrange is both the highest point in the High Fens and the highest mountain in Belgium.

The Belgian part of the High Fens has been on the Belgian tentative list of UNESCO World Heritage sites since 2008 .

Map with all coordinates - extent of the High Fens: OSM | WikiMap 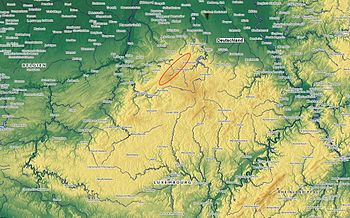 The mountains of the Ardennes and the Eifel, the ellipse marks the location of the High Fens.

Part 1 The High Fens consists of the natural spatial units

The High Fens is part of the Hohes Venn-Eifel Nature Park and is located on the one hand in the Walloon region in East Belgium partly on the territory of French-speaking communities and the German-speaking community , on the other hand in North Rhine-Westphalia in the area of Roetgen , Monschau , Simmerath , Hürtgenwald , Langerwehe and Stolberg .

The environment is characterized by hedge-lined, hilly meadow landscapes, forests as well as scattered villages and farms. The houses are provided with roofs reaching to the ground on the weather side. House-high hedges offer protection from the often windy and humid weather, especially in winter.

The lower area southeast of Aachen is called the Vennvorland .

The climate is harsh for Central European conditions - on average much cooler than the surrounding area - and generally rich in clouds, rain and snow. The heights of the Eifel and Ardennes are the first low mountain range to be met by moist, Atlantic air from the west. In the process, these air masses rise, cool down and discharge the moisture, so that uphill rain in the form of rain or snow occurs. The average annual rainfall is 1400 to 1500 mm with a maximum in December and January and a minimum in May. Days with rain or snow fall on a long-term average around 220 to 230 a year. Fog occurs on around 160 to 177 days (visibility 1000 meters or less), while snow is around 70 to 80 days on average. Despite the generally wet climate, longer periods of dryness sometimes occur, mainly in spring and early summer, which in extreme cases can lead to fires in the peat soil . In the summer of 2004 it burned on an area of ​​200 hectares and in April 2011 in a major fire even on 10 square kilometers.

Most of the snow falls from January to March, the main local season for winter sports. In a few cases, however, a thin blanket of snow was observed on the Venn plateau in October and May.

In earlier times, the storage effect of the many raised bogs largely compensated for the seasonal water runoff and resulted in a more constant flow of water in the streams.

Moorland in the Brackvenn, a landscape in the west of the High Fens, in autumn

Numerous dams, some of which are interconnected, have been built that use and regulate the water to generate drinking water and electricity. The Venn water is made available to residents and businesses within a radius of around 80 km.

The area of ​​the High Fens is geologically assigned to the Stavelot massif . The flat ridge, which stretches from southwest to northeast, consists in the center of Cambrian layers of the Revin (approx. 500 million years ago). The uppermost revin consists of thin-leaved slates that weather to form an almost impermeable, lime-free soil. These weathering products fill shallow depressions and form the subsoil for bogs that formed as a result of the positive water balance (less runoff than precipitation) and the low annual mean temperatures after the last ice age . The deeper revin layers are rich in quartzitic sandstones. They often appear in the central area of ​​the Venn as so-called Vennwacken .

The elevations of the Venn are hardened , which essentially consist of these quartzite sandstones : Botrange, Pannensterz, Richelsley , Steling , Kaiser Karls Bettstatt, Hoscheit and Langschoß. The Venn porphyry is also known among geologists .

In the Silurian (approx. 440 million years ago) the Cambrian strata were unfolded and leveled again by erosion in later geological periods. The base of the hull often formed an island, but was often washed over by the sea. The area in the Upper Cretaceous was last flooded (about 100 million years ago). Flints as relics of the Cretaceous period can be found in the Venn area, among others at Hattlich. Since the Pliocene (5 to 1.8 million years ago) the area has been rising in phases, which can be seen in the terracing of the Rur in the Rurberg, Dedenborn and Widdau area. 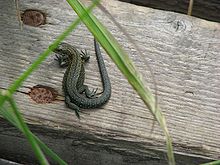 Forest lizard ( Zootoca vivipara ) on a boardwalk in the Fens

The typical vegetation are heather plants such as broom heather and bell heather , but also a partly alpine or boreal flora, such as the spotted orchid , lung gentian , sundew , cranberry , cotton grass . Since grazing has been forbidden in the last few decades, more and more bushy shrubs and the whistle grass are spreading . To the south of the High Fens, in the Eifel National Park , there are extensive wild narcissus meadows that are unique in Germany in this form. On the Belgian side there are large wild daffodil meadows in the Holzwarchetal in the municipality of Büllingen and in the Rurtal.

The protection zones also apply to the black grouse , which reproduce only slowly and must remain undisturbed during their courtship behavior. The first lynxes and beavers have been spotted again since 2003, and in 2013 the rare adder as well . A wolf was spotted for the first time in 2018. Since July 2019, the Eifel around Monschau has been the third region in North Rhine-Westphalia in which a wolf has settled. The “Eifel / Hohes Venn” wolf area designated by the NRW Ministry of the Environment is 505 square kilometers and is located in the Monschau, Hellenthal, Schleiden, Simmerath and Roetgen area.

Remains of an Ice Age palsa in the High Fens; The ring-shaped wall can still be seen clearly.

Another special feature are the pals , which can be found on approx. 2000 hectares . These remains of periglacial hydrolacolites are now ring-shaped walls that enclose a bog or silted-up bog . The height of this ring wall can be a meter or more, depending on the state of preservation. The diameter can be 50 m on a flat area, elongated structures several 100 m in length have been found on slopes.

Palsen point to the periglacial processes during the last ice ages in the High Fens. The High Fens was not icy, but had a high percentage of permafrost . 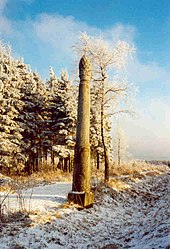 The Boulté, also written Boultay, is considered the symbol of the High Fens

There are numerous designated hiking routes - some with solid ground, but also on wooden walkways. The East Belgian long-distance hiking trail GR 56 leads through part of the High Fens. Popular starting points for local hikes are Baraque Michel , Mont Rigi and Botrange. Part of the wooden walkways was destroyed in the major fire on April 25, 2011. The wooden walkways have now been partially rebuilt.

Some rules have to be observed, for example one may not enter designated zones for the protection of rare animals without a nature guide. There are a total of four zones for access authorization: Zone A comprises the area that is freely accessible to hikers. Under the name Zone B means the area that can be freely committed for the visitors on marked trails. The C Zone , however, may a recognized nature guide only be committed in the company and the Zone D is completely closed to visitors. At certain times, the forest administration can cordon off large parts of the Venn areas (e.g. due to the risk of fire). Red flags will then be raised throughout the entire Venn area. The Polleur-Venn is exempt from this rule. The seven star forms the emblem of the protected area.

In winter, cross-country skiing is possible in the High Fens if there is enough snow . There are numerous trails that are either groomed, such as on Mont Rigi or at Haus Ternell , or untracked and can be used together with walkers, such as at Signal de Botrange .

The High Fens is touched by the Vennbahn , a now disused railway line in the German-Belgian border area, which has now been converted into the international Vennbahn cycle path .

On the edge of the Venn, on the rock of the Richelsley, stands the cross in the Venn , which reminds of the monk Stephan Horrichem .

The highest point of the High Fens is in the southern part of the nature park on the Signal de Botrange . At the request of the Belgian King Albert I, the Baltia Hill was raised there. A staircase leads to a platform at a height of 700 meters and thus reaches the highest point in Belgium.

Sunrise in the High Fens

The LIFE (L'Instrument Financier pour l'Environnement) is the funding program launched in 1992 that supports the development of European environmental and sustainability policy. The LIFE-Nature program is specifically dedicated to the preservation of flora, fauna and their habitats. This program is being developed exclusively in the Natura 2000 network, which aims to restore the networking between the various natural habitats.

The heaths and moors in the High Fens play an important role on a European level: preservation of biodiversity, refuge for rare flora and fauna, regulation of the water balance and the beauty of the landscape. However, these habitats have been badly damaged since the 17th century:

Removal of peat, drainage of the soil, inadequate planting with spruce, extreme expansion of pipe grass. The LIFE project High Fens aims mainly at the renaturation of these moors and moors.

Deforestation of spruce trees planted on wet, unproductive soil to create heather and moors (1130 ha), renaturation of heather areas by removing the top layer of soil or by mowing. This drives the germination and emergence of heather plants (220 ha). Renaturation of moors by flooding pipe grass by installing small dams or closing drainage ditches. This allows the typical vegetation, mainly peat moss, to settle again (min. 25 ha). Installation of fences to promote the natural regeneration of native hardwoods (e.g. pedunculate oak and downy birch) (125 ha), as well as for the maintenance of heathland by sheep (125 ha). Raising awareness of the population through teaching boards, animations in schools, press articles, etc.