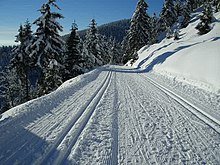 "Loipe" is a superficial German translation of Norwegian løype, which originally means 'steep gully through which you let wood slide down to the valley' and which in turn is derived from the verb laupe 'run' or its causative løype 'get something going' . 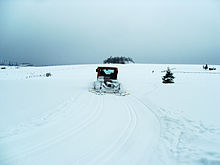 Until well into the 20th century, cross-country ski trails were created exclusively by cross-country skiers, who were the first to leave a trail behind them when they walked through untouched fresh snow. Even today there are regionally known cross-country trails that are regularly created in this way by volunteers, for example the circuit through the English Garden in Munich after every significant snowfall .

In winter sports resorts, on the other hand, trails are usually groomed by machine. The cross-country ski track device attached to the rear of a snow groomer or a tractor (tractor) mills the snow behind the vehicle and loosens it up. Then it is pressed firmly over its entire width, the actual classic trail is pressed into the snow by a special track plate with constant contact pressure.

There are basically two types of trails:

For the classic style, ruts are pressed into the snow to guide the cross-country skis; for the skating technique , on the other hand, a flattened strip of snow is necessary. On a skating trail, higher speeds are achieved due to the running style (ice skating step).

As an alternative, the trail can also be groomed with a snowmobile or caterpillar quad; A cross-country skiing device is then attached to the towing vehicle . With this method, preparation is possible at snow depths of 10 cm or more. After grooming, the compacted snow has to freeze for a few hours to create a stable trail. For this reason, it is usually done in the evening or at night.

Typical trail map of a small ski resort with one-way regulation and mandatory fees ( Gresse-en-Vercors , France, simplified and not quite to scale)

Winter sports resorts usually create several cross-country trails of different lengths and levels of difficulty. Often, several cross-country trails share some sections; the more demanding trails then branch off in longer detours. This can create networks of trails over 100 km in length. However, the total kilometers indicated for most ski areas are misleading: the lengths of all circular routes are added up, which means that several route sections are counted several times. In some cases, classic and skating routes that are set up in parallel are counted twice.

In many areas there is a one-way regulation, which significantly increases the capacity of a cross-country ski trail and increases safety on slopes.

In order to protect the sensitive trail from destruction, hiking and driving on the trails prepared in this way are not permitted.

The signposting of cross-country trails should be based on DIN 32912 (classification, basic graphic symbols and signs to inform cross-country skiers) and DIN 32914 (signs for mountain railways, slopes and trails; requirements) . With these standards, the level of difficulty of the trail is also displayed in a uniform color:

In a number of countries (including Austria, Switzerland, France) fees may be charged for the use of cross-country trails; Daily, weekly and annual tickets are common. In addition to well-groomed cross-country trails, you sometimes receive other benefits such as free use of a foyer de ski de fond with toilets and a heated lounge. In Germany, attempts to introduce mandatory fees have so far failed due to a lack of public acceptance and constitutional objections. In some places, ski clubs ask for a contribution to the maintenance of the trails by means of donation boxes.

In some areas the trails of nearby ski resorts are to local Skifernwanderwegen connected, such as: