Hürtgenwald is a municipality in North Rhine-Westphalia and belongs to the Düren district .

The community is located in the Eifel National Park in the Rureifel and in the North Eifel Nature Park . The highest point in the municipality is at the forester's house Jägerhaus am Langschoss at 566  m above sea level. NHN , the lowest between Gey and Birgel at an altitude of 170  m .

In the Düren district

In the Aachen city region 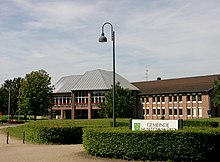 The districts of Simonskall and Vossenack are recognized as places of relaxation . 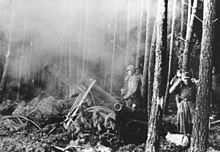 Heavy infantry gun of the German armed forces in the forest of Huertgenwald, November 22, 1944

In the Middle Ages, Berenstein Castle stood as a former imperial castle near Bergstein on the Burgberg , which can only be recognized as a castle stables . Currently there is the Krawutschketurm observation tower and a bunker of the West Wall, which was built in the Second World War (1939–1945) . During this war, the battle in the Hürtgen Forest took place from October 6, 1944 to February 10, 1945 in the municipality around Vossenack and Hürtgen . While neither side was able to achieve immediate strategic success, the battle is one of the most difficult battles in western Europe in the final phase of the war. It is estimated that around 24,000 people died in the course of the battle.

Until these events, the name Hürtgenwald only referred to the state forestry office . The US-American designation of the entire area with "Huertgen Forest" only led to the name "Hürtgen Forest" during a later territorial reform .

Half-timbered house from 1651 in the Simonskall district (monument)

The municipality of Hürtgenwald emerged on July 1, 1969 from the office of Straß-Bergstein (administrative seat in Gey), which was created in the 19th century through the merger of the mayor offices of Straß and Bergstein.

Section 9 of the “Law on the reorganization of municipalities in the Düren district of June 24, 1969” says: “The municipalities of Bergstein, Brandenberg, Gey, Großhau, Hürtgen, Kleinhau and Straß (Office of Straß-Bergstein) will be merged into a new municipality. The community receives the name Hürtgenwald. "

On January 1, 1972, the last municipal reorganization took place through the Aachen Act , whereby the municipality of Hürtgenwald was enlarged to include the former municipality of Vossenack ( Monschau district ).

The municipal council is the local people's representative body for the municipality of Hürtgenwald. The citizens decide on the composition every five years. The last election took place on May 25, 2014.

Coat of arms and banner

The municipality of Hürtgenwald was granted the right to use a coat of arms, a seal and a flag in a certificate from the Minister of the Interior of North Rhine-Westphalia dated December 8, 1975.

The coat of arms is a three-part shield: on a green background a golden-yellow cap and a silver-white pine cone in each of the three green fields.

The Göpel divides the coat of arms, which is intended to symbolize the composition of Hürtgenwald from various localities that used to belong to the offices of Straß, Bergstein and Simmerath . The cones refer to the surrounding forests, which shape the landscape.

Description of the banner: "Green-white-green in a ratio of 1: 4: 1 striped lengthways with the municipal coat of arms shifted slightly above the middle upwards."

Cemeteries of honor in the Huertgen Forest

From 1948 to 1968, ore mining was carried out next to the town of Horm in Maubacher Bleiberg . Later this was the landfill for the Düren district.

Zerkall can also be accessed via the Düren – Heimbach railway line .

Cities and municipalities in the Düren district