The ruins of Nideggen Castle are the symbol of the city of Nideggen and are owned by the Düren district . The rectangular hilltop castle was the seat of the powerful counts and dukes of Jülich and in the Middle Ages had the reputation of being impregnable.

The castle is located in the northern Eifel region in the High Fens-Eifel . In the district of Nideggen, it stands west of the city center on a rock spur facing west ( 330  m above sea  level ) above the Rur .

Nideggen Castle was built by the Counts of Jülich in the strategically important border area to the Monschau rulership at that time . It was supposed to secure the inherited territory of the counts against the interests of the Archbishop of Cologne .

Wilhelm II laid the foundation stone for the castle complex in 1177 with the construction of the keep , which was built within sight of the Reichsburg Berenstein . This was about three kilometers to the west and was built around 1090. After its almost complete destruction around 1200, it served as a quarry for the expansion of the Nidegg castle tower. The yellowish cuboids of Berenstein are clearly distinguishable from the red sandstones of the lower half of the tower, which were broken at Nideggen.

The building was started by Wilhelm III. continued. Like his ancestors, his successor was also in dispute with Kurköln . After a successful battle, Wilhelm IV had the then Archbishop Konrad von Hochstaden incarcerated in the dungeon of the keep for nine months in 1242 . He wasn't the only one who got to know the walls of the dark prison. A few years earlier (around 1214), Duke Ludwig of Bavaria had been allowed to “take quarters” there. And Konrad's successor on the chair of the Archdiocese of Cologne , Engelbert II. Von Falkenburg , was held captive by the Jülich counts there for more than three years from 1267 to 1271.

Nideggen Castle in the first half of the 18th century, drawing by Renier Roidkin

Under Gerhard von Jülich , the settlement "Nydeckin" was established as planned in the vicinity of the Burgfleckens, and in 1313 he granted it city rights .

The complex was expanded from 1340 onwards by Wilhelm V, later Duke Wilhelm I , who had one of the largest halls in the Rhineland built with the Palas on Nideggen . In the late Middle Ages, only the Kaisersaal of the Aachen town hall and the Gürzenich in Cologne were able to offer similar dimensions . It was also Wilhelm I who made Nideggen Castle the headquarters of his family in 1356.

After Rainhald von Jülich's death , the castle came to the von Berg family , whose heads from then on called themselves dukes of Jülich and Berg.

When the Jülich-Bergschen house went out, Nideggen came into the possession of the Duchy of Kleve in 1511 .

Inheritance disputes between the House of Kleve and Emperor Charles V over the Duchy of Geldern culminated in the Third War of the Geldrian Succession (also known as Jülich Feud), during which the castle and town of Nideggen were destroyed by imperial artillery pieces in 1542.

In 1689, the complex was not spared such a fate. It was looted and burned down again by the troops of Louis XIV during the War of the Palatinate Succession . Earthquakes in 1755 and 1878 did the rest. The castle fell into ruin, which was sold for demolition in 1794 and then used as a quarry.

This was only put to an end on the initiative of the citizens of Nideggen. The castle complex was jointly bought and secured after 1888. In 1905 the Düren district received the facility as a gift. It is still in his possession today.

From 1901 the castle was rebuilt for the first time and used as a museum of local history, but attacks during the Second World War caused damage to the building fabric to a previously unknown extent. It was not until the 1950s that rebuilding began. The Romanesque parish church of the Burgfleckens was restored through initial measures . The residential tower was then restored in its original form. Along with the opening of the first castle museum in North Rhine-Westphalia inside, it received a roof again in 1979.

West view of the castle

The square complex is surrounded by walls and evidently came into being after the Middle Ages. A gate in the northwest corner of the wall was the connection to the Burgflecken. In the middle of the west side stood a no longer preserved house from the Baroque period , which had connecting walls to the outer castle gate.

The outer castle gate, built in the 14th century, served as the entrance to the smaller, outer castle courtyard, which also served as a kennel . In the 16th century the gate construction was renewed. It was not until the 18th century that a two-story half-timbered house leaning against the southeast wall was built over the gateway . This so-called gatehouse was reconstructed after its destruction in the Second World War in 1979. Today it is used by the Düren section of the German Alpine Club and the Nideggen mountain rescue service .

The late Romanesque gate has always been the only access to the main castle. It is connected to the fortified tower of the castle by a defensive wall. After the gate had been destroyed by wars and earthquakes, it was rebuilt from 1901 to 1906 and a staircase on the west side was added.

Tower of the castle

With its construction from 1177 to 1190, the residential tower is the oldest part of Nideggen Castle, on the east side of which there is a deep ditch . Around 1350 the height of the tower was increased to six storeys. Inside, the castle chapel is located on the ground floor right next to the dungeon . The remaining floors each have two rooms which, in addition to residential purposes, served as pantries and crew rooms.

The tower was heated from an early stage and had toilets. In order to be able to defend it well, its access on the south side was well above ground level and could only be reached via a ladder. Only when the main gate and the defensive wall had been erected, today's ground-level entrance and a stair tower were built. After the roof was sold for demolition at the turn of the 18th century, the masonry suffered great damage in the following period, which was not removed until 1906. From 1925 to 1944 the donjon was the seat of a local museum. After severe damage in the Second World War , it was rebuilt in 1954 and 1955, and a roof was restored in 1979. Since then, the first castle museum in North Rhine-Westphalia has been located in its interior.

At 61 meters (m) long and 16 m wide, the Palas was the largest hall building in a German castle from the 14th century. Both on the ground floor and the upper floor it housed a two-aisled hall with twelve large cross-decked windows . On its west and east sides it is flanked by two octagonal side towers. At the northwest corner of the palace there was originally a stair tower, on whose foundations the small tower of today's restaurant stands. In the middle of the hall there are remains of columns, as well as the remains of the wall indicate the former location of the north wall. In the front wall there was a side staircase to the upper floor. There are vaulted cellars under the hall, some of which have been buried. Among other things, they served as a kitchen. 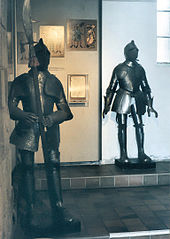 Exhibition in the castle museum

The east flank of the palace building is protected by an octagonal tower from the middle of the 14th century, the height of which was 14 m until 1944. Fragments of a staircase that presumably led to the top of the tower are still preserved today. The lower floor served as a storage room. However, the tower primarily had to fulfill defensive functions, as indicated by its very small window openings.

The octagonal west tower with its large windows also consists predominantly of buildings from the 14th century and served representative purposes. In its interior there are remains of a chimney, which is why it is believed that the chambers for the female members of the count's family are here. A three-part external staircase leads from the castle courtyard to the viewing platform on the tower, from which there is a very good view of the Rur valley.

The castle fountain partly followed a natural crevice and was once 95 meters deep. However, since 1945 it has only reached a depth of around 30 meters.

Buildings on the west and north sides

The appearance of the earlier buildings on the west and north sides of the castle is largely unknown. The current ones were rebuilt from 1901 to 1906 on old foundations. After its destruction in World War II, it was rebuilt from 1948 to 1950. Today the castle restaurant is located there.

The castle museum, opened in 1979 in the castle's residential tower, provides an insight into the Eifel region, which is rich in castles, through its exhibitions. On around 600 square meters, the visitor learns interesting facts about the function and the cultural-historical significance of the castles as well as life in the medieval castle, but also about regional historical topics such as the important noble families of the Eifel and the history of the Duchy of Jülich.

In the summer, the Düren district held a festival at Nideggen Castle every year until 2010. On several evenings there were concerts by prominent musicians like Ich + Ich , Max Mutzke or Götz Alsmann and comedy programs by artists like Atze Schröder or Dave Davis . In 2011 this festival took place at Merode Castle.