Hall of the Kaiserpfalz Goslar

A hall is a building on castles and palaces , the central element of which is a hall (often called a knight's hall ) or a hall , which take up the entire floor area of the building or significantly exceed all other rooms on the floor in size. Many medieval bishops' residences also had a hall. If this comes from the Romanesque period , the term Palas is used for it .

Hall of the Wartburg

Hall buildings in the strict sense are large stately buildings that are defined by one or more halls or halls (some with multiple aisles ), one above the other, occupying the entire floor area . They differ from residential buildings in that the latter have only one small or several small halls. Hall buildings in the strict sense are the exception in Europe, however, they are limited to Palatinate and Palatinate royal castles (early Kaiserpfalz Goslar , Palatinate Paderborn ) as well as a few castles of the high nobility and other powerful noble families ( Gamburg , Ronneburg , Dankwarderode Castle , Tyrol Castle ).

More often there are hall structures that follow a broader definition: In a multi-storey building, the large hall takes up an entire upper floor, while on the ground floor there are several small rooms that are used for everyday activities; for example pantries, storage rooms and kitchens. In such a case, one speaks of a hall storey building (less often a hall storey house ). Another definition of hall construction, which is also broader, exists when the building has only a few other rooms on one floor apart from a large hall, the size and importance of which are clearly subordinate to those of the hall. Examples of hall buildings in the broader sense can be found on the Wartburg , the Kaiserpfalz Gelnhausen , the Ulrichsburg , the Girbaden Castle and the Eger Castle .

Even if the number of hall buildings according to the broader definitions is significantly higher than those that meet the narrow definition, hall buildings are still a major exception in castle architecture and are represented on a maximum of five percent of classic noble castles. 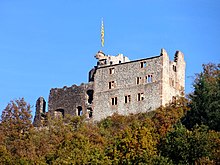 Hall buildings already existed in the Carolingian , Ottonian and Salian times. Initially, they were large, elongated, rectangular buildings that consisted of only one room and were referred to in contemporary sources with the Latin word aula . In German the term “sal” was common for them. At first they only appeared in royal and episcopal palaces, from the 10th century they also appeared in the castles of other powerful builders. At the same time, hall buildings were multi-storey, so that from now on the hall that gave it its name was mostly on the top floor until the Gothic period . Exceptions to this rule can be found, for example, at Ambras Castle and Hohengeroldseck Castle . The first hall buildings with a basement-like basement were built in the Ottonian period. The location of the hall on the upper floor is probably the origin of the later bel étage and the piano nobile in the palace .

Hall buildings were practically never part of the original building stock, but were only added to a system later. In the Hohenstaufen period, representative hall buildings with two or three storeys were a common architectural theme in aristocratic castles and had developed into the standard type of residential and representative building of a castle complex, which only gradually expired in the 14th century. As early as the 12th century, hall buildings often no longer met the requirements of the lords of the castle, which is why they were converted into residential buildings or combined living and hall buildings. The hall was gradually integrated into differentiated and larger room sequences and lost its determining function, so that it was only one room among many. Up until the end of the 14th century, pure hall buildings were built (for example in Marburg and Nideggen ), but by the 15th century at the latest they lost their dominant position within the spatial structure of a castle. 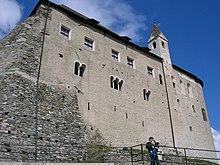 Hall construction of the Tyrol Castle

Until the beginning of the High Middle Ages , hall buildings stood free-standing within the castle or palace area. In later times they were found more and more often on the edge of the curtain wall , usually on the side that was least vulnerable to defense technology and usually in a location that offered a good view. The halls on the upper floors were initially only accessible via wooden external stairs . From the Hohenstaufen era, these were replaced by internal stairs until, in the 13th century, stone stair towers with spiral staircases were used to access the hall. They led to portals , most of which were on the long side facing the courtyard.

As a rule, the hall buildings were made of stone, but up to the 11th century there were also isolated wooden post structures, such as in Elten and Tilleda . In the Hohenstaufen era, carefully hewn blocks were used for the masonry . Many, richly structured windows or arcades ensured that the hall was lighted and ventilated generously and also created a long-distance effect from the outside. In the hall of the Ulrichsburg and the Pfalz Wimpfen , for example, there are rows of windows that extend over the entire length of the building. The windows could often be closed by shutters . The lack of this is - especially in combination with the lack of a heating facility - an indication that the room was probably only used temporarily as a so-called summer hall (see also use ).

As a representative building, hall buildings were always artistically designed. Their structural details and building sculpture resembled those of sacred buildings from the same period. Their dimensions could be very different. The largest medieval hall in Goslar measured 47 × 15 × 6.6 meters until it was redesigned in Staufer times, while the hall in Neuerburg in the Westerwald was only 8.5 × 7.5 × 3.8 meters in size.

Until the end of the Staufer period, there were hardly any columns in the halls , because in contrast to the large chapter rooms and refectories of monasteries , the main halls of castles and palaces were all equipped with a flat ceiling. Only in later times did they also have vaulted ceilings with partially richly decorated supporting columns ( coat of arms hall of Wenceslas Castle , Trausnitz Castle , Albrechtsburg ). The halls were mostly heated by large chimneys, in some hall buildings there were several of them. For the Dankwarderode Castle and the Imperial Palatinate in Goslar, even warm air heating has been proven. The floor was often colored. It consisted, for example, of patterned clay tiles or colorful plates that were laid in patterns. The walls, too, often had colored decorations in the form of wall paintings , colored plaster or glazes , although frescoes like the Iwein cycle at Rodenegg Castle are an exception due to their large area. Instead, different types of stone were often used for the walls and textile wall hangings were also hung. Wooden wall paneling did not appear until the end of the 14th century and then mainly in the Alpine region.

The hall was used for festive occasions such as receptions, parties, dance and music events as well as meetings for legal acts such as consultations and ceremonies . In addition, it was also used as a cloakroom and dining room for guests and castle residents. If there was only one room in the system, it could also serve as a bedroom. If a castle had several halls, castle research assumes that the halls fulfilled different functions. Thus, the magnificent hall was used as a banquet hall, while a second was used for less formal receptions and meetings, and a third function of a Hofstube fulfilled (Albrecht castle and Ingolstadt ). It is also known that some larger facilities had a winter-proof hall as well as a summer hall that could only be used temporarily.