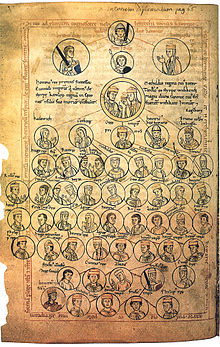 Kinship chart of the Ottonians in a manuscript of the Chronica Sancti Pantaleonis from the early 13th century (Wolfenbüttel, Herzog August Bibliothek, Cod. Guelf. 74.3 Aug. 2 °, pag. 226).

The Liudolfinger , also called Ottonen after the imperial coronation , were a Saxon noble family and a German ruling dynasty. The Liudolfinger ruled in the East Frankish-German Empire from 919 to 1024. The oldest family member that could be identified with certainty was Count Liudolf († 866). The name Ottonen goes back to the three Liudolfing emperors : Otto I. , Otto II. And Otto III.

The rise of the sex coincides with the rise of the East Frankish Empire and the rise of the Holy Roman Empire . Due to the decision of the powerful tribal duke and king Konrad I to appoint Heinrich von Sachsen from Liudolfingen as his successor, the family, which had previously only been important in the Duchy of Saxony , received the royal dignity.

The rulers of the East Frankish-German Empire from the Liudolfinger family were:

Heinrich I was the son of Duke Otto the Illustrious of Saxony and a grandson of Liudolf. He was elected King of East Franconia in Fritzlar by the Franconian and Saxon greats in 919 . One of his most important tasks was the defense of the empire against the repeatedly attacking Magyars ( Hungarians ). He defeated them in 933 in the battle of Riyade on the Unstrut . In the same year he subjugated the Elbe Slavs and Bohemia . This enabled him to stabilize the empire inward. One of his political goals was the creation of imperial unity. He wanted to achieve this by means of the Quedlinburg house rules adopted in 929 , which designated his second son Otto as his direct successor. The other sons were resigned to the ducal office.

With King Otto I, one of the most important personalities of the Holy Roman Empire ascended the throne in 936. It was Otto's army that finally defeated the Hungarians and put an end to the threat from the southeast when he defeated them in the battle of the Lechfeld in 955. In order to complete the stabilization of the empire, Otto had Pope John XII. crowned emperor in 962 . At the same time he renewed the Roman empire of Charlemagne , confirmed the Pippin donation through the Privilegium Ottonianum and married his son and heir to the throne Otto to Theophanu , a Byzantine princess.

As early as 973, Otto II became the new king and then also emperor. He continued his father's policies and was like him a successful ruler. When Otto II died in 983, he left behind a three-year-old son.

This was called Otto III. elected German king in 983. His mother took over the reign for him until 991. Five years later he was crowned emperor. Emperor Otto III. died very early (1002) and left no heir.

But with Heinrich, a cousin of Otto, it became another German king from Liudolfingen. Heinrich was the great-grandson of King Heinrich I and ascended the throne as Heinrich II in 1002 (the king was elected in 1002 ). Despite all opposition, he was crowned emperor in 1014. He was later canonized in 1146 because of his many foundations (establishment of the Bamberg diocese ). He died in 1024 without a male heir, so that the Otton dynasty died out in the male line. With Heinrich the era of the Ottonians came to an end and the royal dignity passed to the Salians ( Konrad II ).