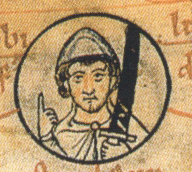 Liudolf (illustration from an Otton family tree in the Chronica St. Pantaleonis , 2nd half of the 12th century)

Liudolf († March 11 or 12, 864 or 866 ) is considered the progenitor of the noble family of Liudolfinger . Its center of power was in eastern Old Saxony . Together with his wife, the Franconian nobleman Oda, he founded the Brunshausen convent, which was later located in Gandersheim . Liudolf's origin is unclear. Modern research suggests a descent from the noble family of Cobbons, who live in Westphalia .

Liudolf's ancestry cannot be determined with certainty. In the biography of the first abbess Hathumod from Gandersheim , a daughter of Liudolf, written around 877, the monk Agius claims that Liudolf comes from the most respected family in Saxony. In her poem Primordia , written in the middle of the 10th century, Hrotsvit von Gandersheim also reports that Liudolf came from "extremely noble" parents, whose names she could not or did not want to mention. In the biography of the Franconian noblewoman Ida von Herzfeld from around 980 , the Vita s. Idae des Werdener Monks Uffing, he accuses Liudolf and his son Otto the Illuminated not looking after Ida's grave without saying that they were only obliged to do so as descendants. In addition, Liudolf buried his son, who died in childhood, there. This burial place was on the Herzfeld farm , which initially belonged to Ida's husband Ekbert , then Liudolf and finally Otto the illustrious, until he exchanged it for properties in Beek near Duisburg. Albert K. Hömberg therefore came to the conclusion that Liudolf was the grandson of Ida and Ekbert. In fact, Ida's son Cobbo , like Liudolf a close confidante of Ludwig the German , had a son named Liudolf from his marriage to Eila. In the Gandersheim rhyming chronicle from the 12th century by the Gandersheim priest Eberhard , on the other hand, Brun is named as Liudolf's father, as is the case in later rhyming chronicles of the High Middle Ages.

According to Hrotsvits von Gandersheim, Liudolf was married to Oda , the daughter of the Frankish, but otherwise unknown princeps Billung and Aeda. Liudolf and Oda had eleven or twelve children, including:

Liudolf had extensive property in Bardengau , in the western Harz foreland, the area of ​​the Leine , on which he founded a women's monastery in Brunshausen in 852 together with Oda and Altfrid - the bishop of Hildesheim and perhaps his cousin - in which Liudolf was also buried. In 881 the monastery was moved to Gandersheim when the new buildings there were completed. Oda found her final resting place in Gandersheim. The monastery became the burial place of the early Liudolfingers and thus the central place of their memoria .

Soon after his death, Liudolf was referred to as the dux orientalium Saxonum , that is, the "Dux" of the eastern Saxons. The use of the title "Dux" was varied in the early medieval sources. It was awarded to dukes , military leaders, leaders of Slavic tribes, border commanders or provincial governors of the Frankish Empire. Sometimes the position as a public official or an honorary priority among nobles was sufficient. In older research it was nonetheless undisputed that the Liudolfingers occupied the leading position in Saxony in the second half of the 9th century. Liudolf as the progenitor of the family was already considered a "tribal duke", followed by his sons Brun and Otto in this position. Matthias Becher , on the other hand, thinks that the designation as dux was intended to describe Liudolf in general as a politically important person in Eastern Franconia. In addition, Liudolf's close proximity to the king and his powerful position in Saxony can only be justified with the marriage of his daughter Luitgard to Ludwig the Younger , the son of Ludwig II the German and the intended heir of the eastern part of the empire. At this point, however, Liudolf had already died. In fact, contemporary sources only grant him an outstanding political position in Eastern Franconia on the occasion of his death, without making him emerge as Duke of the Saxons.