The medieval rulers of the empire saw themselves as the direct successors of the Roman Caesars and the Carolingian emperors , following the imperial idea of late antiquity and the idea of Renovatio imperii , the restoration of the Roman Empire under Charlemagne . They propagated the idea of ​​the Translatio imperii , according to which the highest secular power, the empire, had passed from the Romans to the Franconian-German Empire by divine right .

The area of ​​the early medieval East Francia was first referred to as Regnum Teutonicum or Regnum Teutonicorum (Kingdom of the Germans) in the 11th century . Otto the Great was already crowned Roman Emperor by the Pope in 962 , after he had also acquired the title of King of Italy. His successors retained this claim and insisted on the right to be crowned Roman Emperor, which they could implement with a coronation procession to Italy and the coronation by the Pope. In 1157, under Frederick I, the term sacrum ("holy") appeared for the first time for the kingdom, which included the German kingdom as well as the Italian kingdom and, from 1032, the Burgundian kingdom. The official designation as the Holy Roman Empire is first documented for 1254. Consequently, its rulers had themselves called Rex Romanorum (King of the Romans) before their coronation since the 11th century . With this title they combined the claim to the imperial crown and to supranational rule, which included various language areas: German ( Roman-German King ), Italian ( Imperial Italy ), French ( Kingdom of Burgundy ) and Slavic (including the Kingdom of Bohemia ). This claim was increasingly disputed by the papacy from the beginning of the Investiture Controversy in the 11th century, in particular by Gregory VII in his writing Dictatus Papae , which awarded the pope universal dominion over all spiritual and temporal rulers.

In addition to propagandistic reasons, there were also salvation-historical reasons for linking the Roman-German Empire to the ancient Roman Empire. According to the medieval understanding of history, which is influenced by chapter 7 in the book of Daniel , there had been four successive world empires in antiquity : the Babylonian , the Median-Persian , the Greco-Macedonian and the Roman empire. In the Roman Empire, in which Jesus was born and which had changed into an Imperium Christianum since Emperor Constantine , many scholars since Augustine saw the final form of secular rule in which Christianity would develop until the end of time. They therefore did not see the empire of Charlemagne and the German kings as the successor state of the Western Roman Empire, which had fallen in 476 , but as this empire itself in a new form. This also explains the addition Heilig , which appeared in the High Middle Ages in the official designation of the empire and also of the emperor .

The Roman Empire in the east with the Byzantine Empire (eastern part) continued to exist constitutionally without interruption. However, since the Eastern Roman or Byzantine Empire was ruled by a woman, Empress Irene , in 800 AD, proponents of the Translatio imperii theory argued that the imperial throne was vacant and thus legitimately transferred to Charlemagne by the Pope. 150 years later, Otto I again referred to the Carolingian tradition . By accepting the title of emperor in 962, he consciously tied in with the Frankish and Roman idea of ​​an empire .

The idea of ​​empire was still alive in the late Middle Ages , when the power of the empire had already dwindled considerably. Henry VII , whom Dante praised almost panegyrically , took up this directly and emphasized the importance of the empire as a universal power, also in the sense of Christian salvation history. He also made use of Roman law (like the Staufers did over 100 years earlier). However, Henry VII's imperial self-image, his imperial idea, also provoked resistance from France and the Pope.

The addition "German nation" appears in the literature for the first time in 1438, the year Albrecht II took office . In 1486 it was first mentioned in a legal text. The emphasis on the German character of the Roman Empire increased from the end of the 15th century, when the power of the emperor in imperial Italy was de facto no longer significant and was essentially limited to the German dominion. This terminology was also used in the defensive struggle against Charles the Bold of Burgundy.

In the empire, the view increasingly prevailed that the king (or future emperor) was elected by the electors , who was then either crowned emperor by the pope or – from the early modern period – assumed the imperial office without confirmation by the pope moved up. The papacy, on the other hand, had always insisted in the Middle Ages that it could itself decide on the "suitability" of the emperor - which met with considerable resistance in the empire (see Staufer ). The official royal title up to the Ottonian period was Rex Francorum (“King of the Franks”) in Regnum Francorum orientalium (“Kingdom of the Eastern Franks”), then Rex Romanorum (“King of the Romans”, Roman-German king ).

After the imperial coronation, the addition semper Augustus was added to the titulature, which was partly used even before the imperial coronation. This title was translated into German as "always more of the kingdom", since Augustus was derived from the Latin verb augere ("to increase, increase"), but was interpreted incorrectly, since Augustus is to be understood here as "exalted". The term Mehrer stood for the duty of the ruler to protect and preserve the rights of the empire. In concrete terms, this meant that the emperor had to prevent the alienation of imperial rights such as regalia (as in Italy) or the loss of areas (as in the western border area with France). 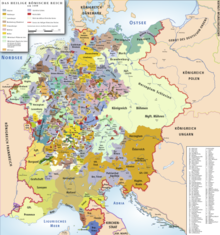 The Holy Roman Empire around 1400

Since the adoption of the title Elected Roman Emperor by Maximilian I (1508), it was used by all subsequent Roman-German kings when assuming sole power and the official coronation, for example by Charles V in 1520. From then on, a coronation by the pope was dispensed with , with the exception of Charles V, who later had himself crowned by the Pope in Bologna in 1530.

The last emperor of the Holy Roman Empire of the German Nation , Franz II , had the title divina favente clementia electus Romanorum Imperator, semper Augustus (“Chosen Emperor of the Romans by the grace of God, at all times more of the empire”) and was only Germaniae in a secondary title Rex (“ King in Germania ”; since Maximilian I. 1508). After Napoleon Bonaparte had proclaimed himself Emperor of the French, the Emperor proclaimed himself Emperor of Austria as Franz I on August 11, 1804 in order to prevent a loss of status and to continue the imperial crown of the Habsburgs . With the establishment of the Confederation of the Rhine under French protectorate and under the pressure of a French ultimatum, Franz II felt compelled to lay down the Roman-German imperial crown on August 6, 1806. Concerned that the imperial crown could fall into French hands and that the Austrian lands could fall under de jure Napoleonic rule through their feudal attachment to the empire, he dissolved the empire as a whole, thereby exceeding his powers as sovereign.

Reception of the term in historical studies

In common parlance and in older literature, the term German Kaiser is used for the “Kaiser des Holy Roman Reichs deutscher Nation ”. These designations appeared in official documents as early as the 18th century. Since in 1871 the majority of the German principalities and kingdoms came together in a " small German " empire ( Deutsches Reich ) ( Reichsfoundation ), more recent historical literature had to make a distinction: the former "German emperors" were called Roman-German emperors , since the title Deutscher Kaiser was now worn by "Prussian-German Emperors".

The title of Holy Roman Emperor was used at least once officially by the emperor himself, namely in the document with which Franz II created the hereditary Austrian imperial dignity in 1804 . There he speaks both of the "Roman-German Empire" and of himself as a "Roman-German Emperor".

Wikisource: Decree of Maximilian I on the imperial title  - sources and full texts