Gregory VII , originally Hildebrand (of Soana) (b. 1025–1030 possibly in Sovana ; † May 25, 1085 in Salerno ), was Pope from April 22, 1073–1085 . Because of his importance for the church reforms of the 11th century , which are also referred to as "Gregorian" reforms after him , he is considered one of the most important, but also - even during his lifetime - as one of the most controversial popes in church history . Peter Damiani, a close comrade-in-arms, described him appreciatively and at the same time reprimandingly as “Holy Satan”, “God’s rod” and “Hell’s fire”, compared him to a tiger, lion or ravening wolf and considered resistance against Gregory futile.

Probably born in Tuscany between 1025 and 1030, Hildebrand was initially a “ monk ”, as he is called in contemporary sources. For a long time, historical research assumed that Hildebrand was a Cluniac and lived in a monastery that can be attributed to the Cluniac reform . Recent research has convincingly questioned this and the majority now assumes that Hildebrand, as a canon , belonged to the regulated clergy of an episcopal church, i.e. was a secular priest who led a life similar to a monastery in the clerical community of a monastery. The church reform movement was extraordinarily popular among such clerics. As archdeacon of the Roman Church, Hildebrand became a key figure in Roman church politics from around the middle of the century. As with all reformers of the time, the fight against simony and priestly marriages as well as the influence of lay people on church life determined his church-political efforts.

In 1046 he accompanied Pope Gregory VI , whom he admired . , who had been deposed by the Synod of Sutri , was exiled to Cologne . Two years later (1048) Emperor Heinrich III. Bruno von Egisheim-Dagsburg as the new Pope Leo IX. appoint. He insisted, however, possibly on Hildebrand's advice, to be elected pope by the people and clergy . After his death in 1054, Hildebrand was to be made pope, but the emperor appointed Gebhard, bishop of Eichstätt; From then on he called himself Viktor II.

Pope Alexander II died in 1073. At his funeral, the people of Rome shouted: “Hildebrand should be Pope!” He had himself enthroned as Pope under the name Gregory VII . This election of inspiration clearly violated the papal election decree of 1059, which stipulated that the pope was to be elected by the cardinals and which also confirmed the (rather generally formulated) right of the Roman-German king to have a say.

In the second year after his enthronement, Gregory was making plans to intervene with an army in Byzantium that was in danger of being overrun by Seljuks . This is interpreted by some historians as the first call for a crusade ever. Gregor himself wanted to lead the crusade to the east. The Pope intended to place the leadership of Western Christianity in the hands of the German King Henry IV during his absence . However, local conflicts in southern Italy, a dispute with the French king Philip I and the rejection of the oriental church towards the supremacy of the Holy See in Rome made it impossible to realize these plans. 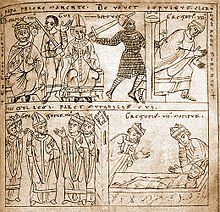 The term of office of this pope led to the so-called Investiture Controversy , which was only settled for the empire in the Worms Concordat of 1122. In 1075, Gregory VII had 27 guiding principles, the " Dictatus Papae ", recorded, in which he emphasized, among other things, the priority of spiritual power over secular rulers. At the Roman Lenten Synod in the same year , Gregory VII suspended individual German bishops who had not appeared and summoned the five councilors of Henry IV, who had already been excommunicated in 1073 because of the king's measures in the occupation of the Archdiocese of Milan , to bear responsibility. When Heinrich, contrary to his promises, again occupied the throne of Milan, Gregory sent him a serious letter of protest and warning, which was received with indignation at the royal court at the beginning of 1076.

As a response to repeated reproaches and interventions by the Pope in diocese processes north and south of the Alps, Heinrich wrote a letter of refusal to Gregor at a court day in Worms on January 24, 1076, in which he wrote to him with the words "Climb down, climb down!" (descende , descende) to abdicate . He argued that in contrast to the king, the pope is not called into office by God through his birth, but is elected by people. Numerous German and northern Italian bishops supported the demand. Gregory VII then immediately banned Henry IV and his followers , which massively shook the political order in the empire.

In order to save his kingship, the Salians then went to meet the pope, who himself wanted to cross the Alps to take part in the consultations of Heinrich's German opponents. Henry met Gregory in Canossa Castle, who, after three days of penance, released him from the ban on January 28, 1077. However, the newly won peace did not last long - in the spring of 1077 the German princes elected Rudolf von Rheinfelden as anti-king. Henry IV demanded that the pope ban Rudolf immediately and threatened to appoint an anti -pope if he did not. Gregor remained undecided for a long time and kept both options open without initially terminating the reconciliation with Heinrich. It was not until March 1080 that Gregor openly went over to Rudolf's side, once again declared the king excommunicated and deposed, relieved the subjects of their duty of obedience and announced Henry's imminent death. That was the final break. Although Heinrich's army suffered a severe defeat against the rebellious Saxons led by the anti-king Rudolf in the Battle of Hohenmölsen in 1080, the death of Rudolf, caused by an injury to the right hand of the oath, massively weakened the opposition. The following year, Henry IV moved to Italy again. Archbishop Wibert von Ravenna, who was nominated for imperial anti-pope at the Brixen Synod in 1080, climbed in 1084 under the name Clemens III. the papal throne and crowned Henry emperor after he had conquered Rome. This began a schism that lasted until shortly after Wibert's death in 1100.

While Emperor Henry and the new Pope resided together in the Lateran , Gregory entrenched himself in the Castel Sant'Angelo . After the Normans had conquered the city and pillaged the streets, Gregory was driven out by the Roman population. He left Rome with a small entourage and retired to Salerno .

Gregory's government did not exhaust itself in carrying out the Investiture Controversy, the Italian policy and the defense against Byzantine and Arab attacks. Rather, it was also of great importance for the Scandinavian Church. His policy pursued the goal of strengthening the regional churches and gradually emancipating them from missionary status, according to which they came under the archbishopric of Hamburg-Bremen . In his letters to the kings there, he asked for bishops or learned clerics to be sent to inform him directly about the actual situation on site. Gregor also maintained lively correspondence with Eastern European kings and princes. With these initiatives he was also concerned with strengthening the curia as a central authority. It was to become the jurisdictional center of the universal Church and the formative center of the peoples. The long-term goal he had in mind was an independent church organization in all three Nordic kingdoms, which was to be independent of the German Empire and the imperial church and tied directly to the pope. In doing so, however, he overlooked, from today's perspective ideologically and politically overly motivated, that his radical methods and his claim to the supremacy (priority) of spiritual power over the secular power of the laity penetrated sensitively into areas that had long since had equal rights with their own claims alongside the Roman and had tried to emancipate from ecclesiastical violence.

For the first time, Gregory's government was directly shaped by the conflict between pope and emperor that characterized the High Middle Ages , which was ultimately only resolved in the Renaissance, Reformation and Enlightenment eras and led to the separation of church and state that is common today in the originally Christian West . Under Gregory VII, the papacy's claim to secular and spiritual leadership of Christianity (see papal primacy ) reached its climax, notably through the Dictatus Papae of 1075.

Gregory VII died in Salerno on May 25, 1085 without revealing his convictions. His epitaph reads: “ Dilexi justitiam et odivi iniquitatem; propterea, morior in exilio ” (English: “I loved justice and hated injustice, so I die in exile”). As a downside to the bitter appeal of these words, they were also to be understood as an expression of his self-determined confidence in salvation. Analogous to this it says in Psalm 45.8  EU : "You love what is right and hate what is wrong, therefore God, your God, has anointed you with the oil of joy like none of your companions." Desired successors have named: Archbishop Hugo von Lyon and Abbot Desiderius von Montecassino, who was present in Salerno himself and named him Victor III. eventually succeed the papal throne .

In 1606 Gregory VII was canonized by Pope Paul V. The canonization can probably also be explained by the propagandistic strengthening of the Counter-Reformation movement at the time . The day of his death is a (non-compulsory) day of remembrance (May 25) of the Catholic Church.

Only a few churches bear the patronage of Gregory VII. After the Canossa Column was erected on the Großer Burgberg in Bad Harzburg in 1877 during Bismarck 's Kulturkampf on the 800th anniversary of Canossa ("We're not going to Canossa!"), the first post-Reformation Catholic church building received the Region in Bad Harzburg-Bündheim 1880 the name St. Gregory VII.